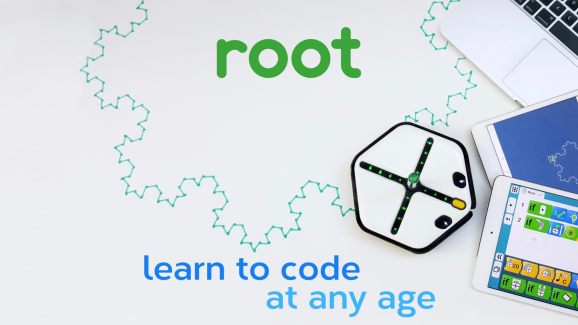 “The acquisition of Root Robotics allows iRobot to broaden the impact of its STEM efforts with a commercially available, educational robotic platform already being used by educators, students, and parents,” said iRobot CEO Colin Angle in a statement. “Root also helps increase the reach of iRobot’s educational robot line by offering a proven system for people of all ages, including students in elementary school.”

Root is a two-wheeled, LED-sporting toy that operates on flat surfaces like tables, floors, and countertops, as well as vertical surfaces like classroom whiteboards. Magnetic attachment points on its top let users affix 3D-printed accessories to it. Root pairs with a companion mobile app via Bluetooth, allowing budding roboticists to instruct the robot to sketch a drawing (with any marker or pen), scan colors and kick off games, play melodies composed with sheet-music-like lines, and respond to touch and sound.

Like many robotic toys aimed at kids, Root supports basic routines programmed in one of three supported languages (including a block-based visual programming language). The aforementioned app guides users through three levels: graphical coding blocks that teach logic skills, a hybrid coding level with a more detailed interface and drag-and-drop language, and a full-text coding interface in Apple’s Swift (with Python and JavaScript on the way).

iRobot notes in a press release that its purchase of Root solidifies its commitment to “making robot technology more accessible” to educators, students, and parents, and it marks the company’s second foray into an educational robot market anticipated to be worth $1.69 billion by 2023. Since 2007, iRobot has offered Create, a programmable hobby robot that optionally connects to sensors, grippers, wireless connections, computers, and other hardware and that can be controlled by any embedded computer with a serial connection.

“The Root coding robot is an incredibly powerful tool for learning to code because it intuitively scales to users’ abilities,” said Root Robotics cofounder Zee Dubrovsky, who will become general manager of educational robots at iRobot. “A four year old can begin coding Root using simple pictures and symbols that translate to robot actions. Once a child has mastered graphical coding, they can seamlessly toggle to the next two levels, which introduce hybrid coding, followed by full text coding. This scalable approach is what has been missing from other educational coding robots.”