Speaking at a CES 2020 press conference today, Qualcomm President Cristiano Amon provided a brief overlook at the current state of 5G device uptake around the world, as well as introducing Lenovo’s long-awaited 5G PC, the convertible laptop-tablet Yoga 5G, which will carry a $1,499 price point starting in spring 2020.

According to Amon, prior 2020 targets of 200 million 5G devices appear at this point to be “conservative,” as momentum continues to build for the company’s Snapdragon 8- and 7-series chips. There are now over 340 operators investing in 5G globally, including over 45 with 5G already deployed, and the company is expecting over 200 million 5G smartphones — just one category of devices — to be shipped over the year. By 2022, it says, the number of shipped 5G smartphones will be over 750 million, and 5G connections should beat 1 billion by 2023, two years faster than 4G hit that number. Qualcomm now estimates 2.8 billion 5G connections by 2025.

The company also used its CES conference to co-announce Lenovo’s Yoga 5G, which they billed as the world’s first 5G PC thanks to a Spring 2020 on-sale date — a quarter before “Summer 2020” 5G laptops that have been announced by Dell, HP, and others at CES. All of these initial 5G laptops notably appear to be powered by Qualcomm’s Snapdragon X55 modem, regardless of whether they’re using Intel or Qualcomm CPUs.

Lenovo chose the Snapdragon 8cx chipset for Yoga 5G, which converts from a laptop to a tablet as the user prefers. On the hardware side, it promises 24-hour battery life, a 14-inch display, Dolby Atmos, and both a fingerprint scanner and IR camera for security. An Adreno 680 GPU should provide ample graphics horsepower despite requiring no cooling fan.

Yoga 5G is being marketed as offering 5G users a more secure alternative to open Wi-Fi, by enabling them to connect via 5G cellular rather than using potentially insecure public networks. According to Lenovo, the Yoga 5G’s major technical innovation is a patented 5G antenna system that’s capable of working with 5G millimeter wave and sub-6GHz frequencies while working in either tablet or laptop modes. The machine is also able to dissipate heat 60% better than the prior generation, and has a new adaptive USB charging port. 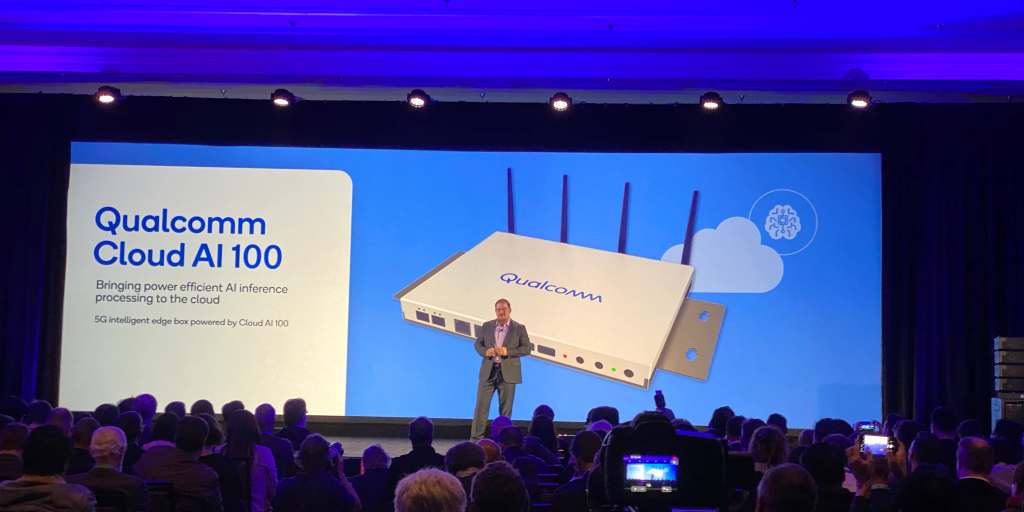 Qualcomm also briefly teased Cloud AI 100, an intelligent edge AI inference processing unit for the cloud. The unit will emphasize power efficiency, enabling a greater spreading of AI tech to the edge of the cloud.