Reliefband Technologies has unveiled a new line of therapeutic wearables that prevent nausea and vomiting associated with motion sickness, and it has received expanded clearance from the Food and Drug Administration for treatment with its devices.

Reliefband is showing the devices at CES 2020, the big tech trade show in Las Vegas this week.

The FDA’s approval could mean a lot for Reliefband. I’m one of those people who never really put much stock in these types of devices, which use electric pulses to help users deal with the nausea and vomiting associated with motion sickness. But now the company says it can treat a variety of other problems, such as hangovers, physician-diagnosed migraines, chemotherapy, and morning sickness, and serve as an adjunct to antiemetics for postoperative surgery.

Reliefband said it has tapped more than 20 years of clinical research for its patented technology, which uses accurately programmed pulses with a highly specific waveform, frequency, and intensity to stimulate the median nerve on the underside of the wrist. The signals flow to the central nervous system, where they work via the vagus nerve to normalize stomach rhythms that cause nausea.

Reliefband says its drug-free therapy is highly effective and doesn’t have the side effects associated with anti-nausea medicine, such as drowsiness and constipation. All Reliefband devices can be used either before or after nausea and vomiting symptoms start and left on as long as symptoms continue. 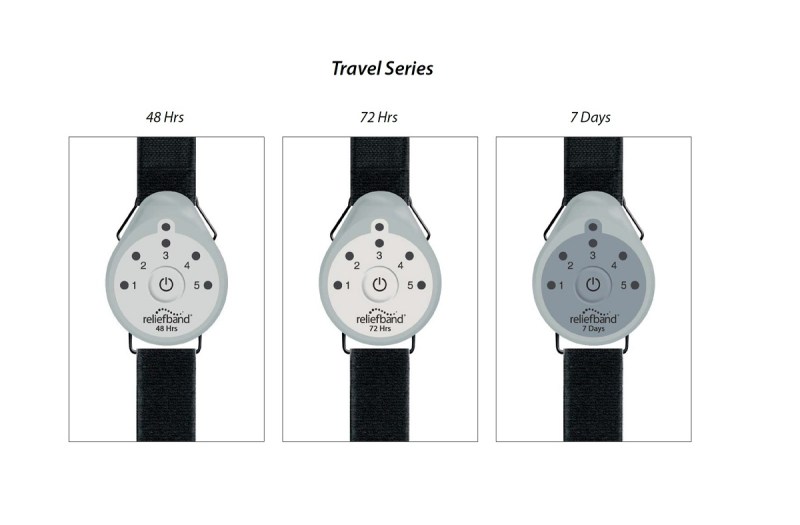 This band is designed as a cost-effective, limited-use wearable device for casual travelers who deal with nausea symptoms on a sporadic basis. Three single-use models work at a moderate level of intensity for 48 hours, 72 hours, or seven days, and they can be turned on and off as needed.

The devices function with an included set of non-replaceable/non-rechargeable batteries and are aimed at unsteady flyers, cruise vacationers, and others who suffer from motion sickness or travel-related anxiety.

The company says this easy-to-use and clinically proven waterproof wearable includes a built-in rechargeable battery that, when fully charged, will last an extended period of time on the medium intensity level. Six intensity levels can be quickly toggled, allowing users to find one that’s optimal for their needs at any moment.

The band, case, and housing are fully customizable with a variety of color options.

Meanwhile, Reliefband will also show a prototype of the new Reliefband Sport that can be configured to seamlessly attach to an Apple Watch. With an additional band, the Apple Watch would sit on top of a user’s wrist, with the Reliefband Sport aligned on the underside of the wrist so it can deliver therapy.

The expanded use indications were approved for the Classic and Premier models, as well as the new Reliefband Travel and Reliefband Sport models unveiled today at CES 2020.

Reliefband CEO Rich Ransom said in a statement that 38 million people in the U.S. suffer migraines, and the most common symptoms are nausea and vomiting.