It didn’t take long for people to become comfortable with robotic Roomba vacuum cleaners. Now a California company is preparing to place next-generation wireless chargers inside similar roving robots, as well as room decor, with the promise of keeping mobile devices in homes and offices fueled up wherever they are.

At CES this week, Pasadena-based GuRu Wireless is showing off prototypes of three different over-the-air solutions based on millimeter wave (mmWave) technology — a novel approach to transmitting energy without the need for a cable or a near-field inductive charging surface. GuRu says its technology uses the relatively short-distance radio waves to deliver multi-watt power — “comparable to what consumers are used to with their traditional chargers.” The “safe and intelligent” system automatically detects the correct power levels for devices and adjusts its transmitter accordingly.

One of the prototypes mounts on a ceiling, sending power to devices at over 10-foot distances, while another could charge multiple nearby phones within proximity to a conference table’s lamp. But the most interesting is the Rovee robot, which could autonomously roam from room to room, sensing the power needs of wireless devices and recharging them without making physical contact. While the prototype robot looks a lot like a Roomba, with a similarly sized box angle-mounted on the top, production versions could obviously be more compact. 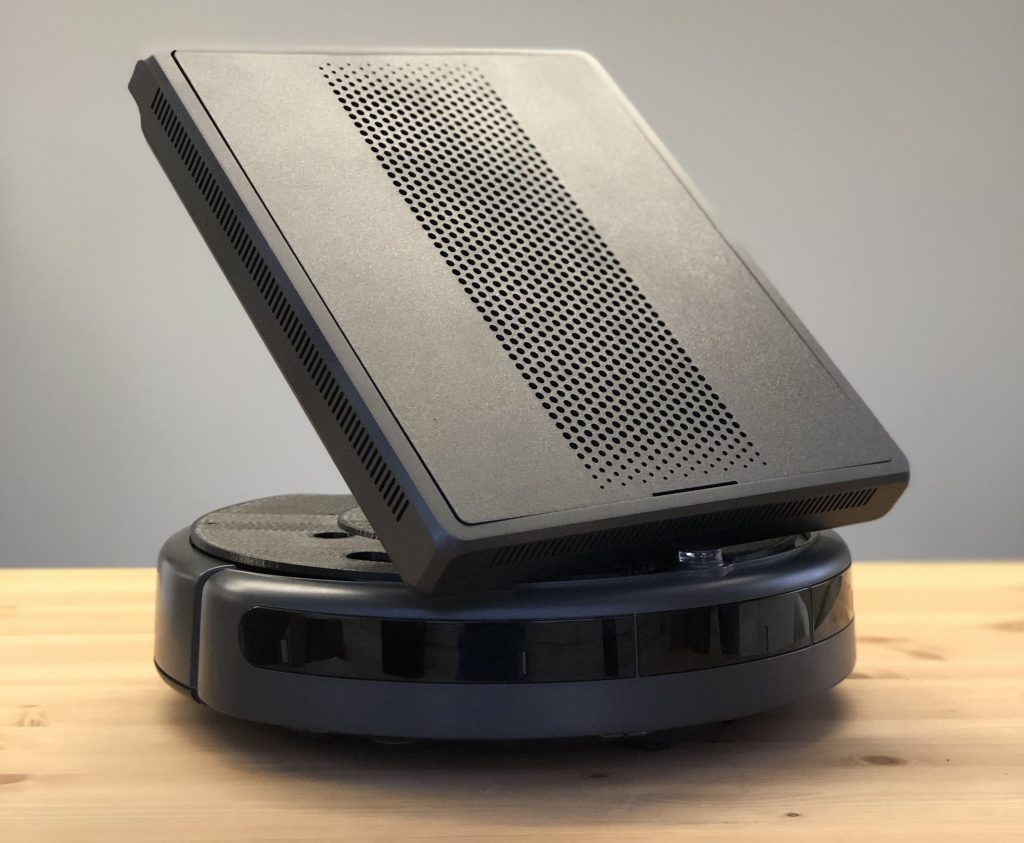 Above: GuRu’s Rovee prototype robot anticipates truly mobile wireless charging, in a form factor that can automatically move from room to room.

“The time has come to deliver what others have been promising for over a decade,” said GuRu CEO Florian Bohn. “For a technological era that we’ve been calling wireless, we still have a lot of wires in our lives. Today marks the birth of real wireless-ness.”

Realistically, the timetable for GuRu’s rollout isn’t so much “today” as “in the foreseeable future.” The company has multiple patents of its own, as well as exclusive rights to patents developed while conducting research at Pasadena’s Caltech, and the FCC is said to be in the final stages of approving the technology for an initial product rollout “later this year.” Pricing and specifics aren’t yet available for any of the wireless chargers, or the accessories that will be required to receive power over mmWave frequencies.

Other companies are working on wireless power transmission, including Energous, Ossia, and Wi-Charge, each with its own approach to transferring energy over radio or light spectra. GuRu’s is the first to target millimeter wave frequencies, which have emerged as the fastest channels for wireless data, with support in a growing number of cellular phones and WiGig-capable routers.