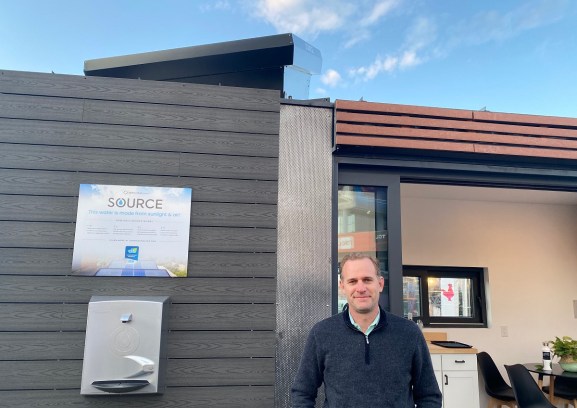 Cody Friesen is CEO and inventor of Zero Mass Water's Hydropanels that pull water from air..

Pulling water out of thin air is Zero Mass Water‘s big idea, and now we’ll see how far it can go.

Cody Friesen, associate professor of materials science at Arizona State University, came up with the idea to extract water from air using what he calls a hydropanel, which combines solar power, air, and electricity to create the conditions for condensation of water.

The technology is like something out of Frank Herbert’s classic science fiction novel Dune, and Friesen created a startup dubbed Zero Mass Water to make it real. It comes at a time when Australia is in flames and Syria’s ghastly civil war was caused in large measure by a severe drought. Can water save us?

Zero Mass Water’s Source Hydropanels require no electrical input, pipes, or public utility infrastructure. It is a way of using the resources that are already in abundance around us — the water that exists in our air.

And now Zero Mass Water is scaling it up. I interviewed Friesen last week at CES 2020, the big tech trade show in Las Vegas last week. The company launched its Source Rexi Hydropanel, which can be put on a roof and is half the size of the previous version. It is easier to install, and can produce more water on a daily basis.

The company is also introducing its new “water-as-a-service” business model. Friesen said in an interview it has deployed multiple Source Fields, or large-scale hydropanel arrays that create an ongoing supply of water for communities and businesses. In places like Dubai and Australia, cities are purchasing large amounts of Source Field water. 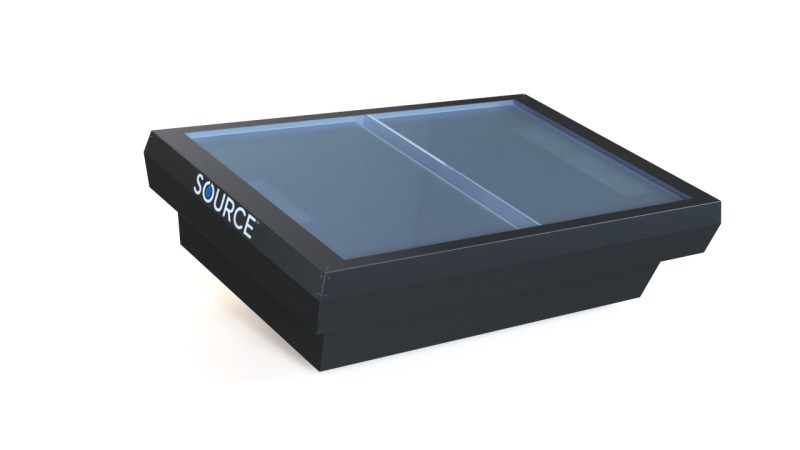 VentureBeat: It looks like you’re moving right ahead. I read about lots of deployment in Dubai and other places.

Cody Friesen: It’s been a busy year. We’re installed in 36 countries now. I don’t remember the number from the last time we sat down, but it was probably 18 or 20. It’s been quite a bit of progress this year.

We’re announcing two things here. One is Source Rexi, which as you can see is about half the size. It’s the same size as a residential solar module. It produces the same amount of water as the previous version. It’s optimized for rooftop and residential. As you can see, it’s a much more elegant — we call it the 8-bit design, like Max Headroom.

The other thing we’re announcing is Source Fields. Just like in solar, when the invention of the PPA came along, the power purchase agreement — that enabled people to buy electricity rather than solar panels. That enabled the scaling of solar. We have what are effectively WPAs, water purchase agreements, which have enabled us to install large arrays in Dubai, Australia, and so on. We’re doing a lot of those going forward.

It’s two very different, but very innovative, elements of the progress at Zero Mass Water. One is around technological innovation and one is around financial innovation. Now we’re enabling people to just buy water in the one case, and providing a product that’s dialed in to go alongside solar on homes. If you have an array on your roof, let’s say on the south-facing facet, you can then put this on the east-facing facet, if you have enough space, or you can go in the same array alongside solar.

VentureBeat: Would that be a little heavy for a roof? Does it work on normal residential construction?

Friesen: Absolutely. We’ve been installing on roofs for a long time. That thickness is really incorporating the reservoir that stores 30 liters of water and a number of other elements that provide for function.

VentureBeat: Is there a percentage of a city’s water supply these arrays can provide?

Friesen: So far the work we’ve been doing is in hospitality communities, resorts, sustainable bottled water companies, an indigenous-owned company in Australia. We’ll be doing a large WPA in Australia at schools. When you think about how many hundreds or even thousands of schools you have there that don’t have steady water supplies — they use rainwater tanks. I was in Queensland in December. They had converted a whole classroom into bottled water storage so that when parents dropped off their children, they could pick up their flat of bottled water and take it home, because there’s no water. Now they have arrays at the schools to provide water on an ongoing basis. 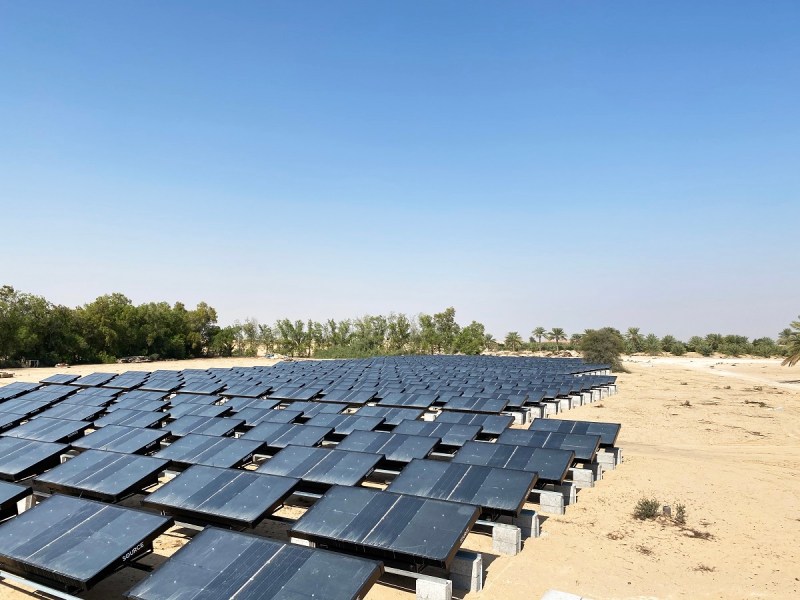 VentureBeat: Does this complete the way you would want to get to full distribution of what you do?

Friesen: There are two things. One is, everywhere in the world, there’s an incumbent cost of drinking water. Often that involves — it could be bottled water, filtered water, boiled water, or trucking water in. When we go to a WPA, we’re right there alongside, displacing those incumbents. Then, as you think about — we’re on a Moore’s Law learning curve. We’ve had enough years of experience now where we can see the learning curve has been at a pretty high rate. There’s no reason, fundamentally, why the water that comes from Source couldn’t eventually be cheaper than any other potable source in the world.

VentureBeat: How many liters per month does one of these produce?

Friesen: Each one of those will do about 300 standard bottles of water a month, 16 ounce bottles. About three to five liters per day per panel of perfect drinking water.

VentureBeat: Does that become the sole source for a family, then, or a school?

Friesen: For example, at my home I have two panels for a family of four. We have dogs, and all of us are drinking and cooking from those two panels. At a school you might have anywhere from five to 20 panels to provide all the drinking water there. Obviously our focus first is drinking water, because that’s the most valuable, the most important water on the planet. But as that water gets to a lower cost, you can imagine broader uses.

VentureBeat: Does it feel good that you can counteract some of the drying of these regions around the world?

Friesen: When I was in Australia back in December — they call lakes “dams.” We’re driving along and every one of the dams is dry, cracked mud. It becomes a real issue. How do you get water for yourself, for drinking and cooking? How do you water your livestock or your fields? You start to think about not just drinking, consumption, but also advanced agriculture.

VentureBeat: And there’s still enough water in the air?

Friesen: Absolutely. There’s about two times 10 to the 17th power kilograms of water vapor in the air, in the troposphere, which is more water than all of the fresh water on the planet. You think about it, the sun is going over the oceans and evaporating all that water, and it’s raining back. It’s about a six-day average cycle. You talk about the ultimate renewable resource.

All water, before Source, whether it’s surface water or ground water, is an extracted resource. It’s also a mass customization problem. The reason why water is such a thorny problem — you and I show up in a new place and we want to found a new town somewhere that hasn’t been settled. OK, there’s no surface water. Put a hole in the ground and pull the water out. What’s in that water? Arsenic or whatever else? Then you have to build a treatment plant to address that specific water. After that you have a waste stream to deal with. It’s this mass customization problem.

For the first time in water, we can establish, effectively, an artesian well anywhere on the planet without foreknowledge of what’s there. It’s been a fascinating company to build. Back in September, I won what’s called the Lemelson-MIT prize, which was incredible. That’s a half-million-dollar prize. I called up a friend who’s president of Conservation International. I said, “Where would be good to put an array?” I donated the award to Conservation International and we put two large arrays in northern Colombia. We’ll be doing the ribbon-cutting in the next month or so.

It’s a beautiful thing, to go from the bench at the university, literally on the lab bench, developing early duct-tape-and-baling-wire prototypes, putting those out in the field, learning in dog years, as fast as possible, and now — four and a half years since we closed the series A — we’re in 36 countries. It’s the fastest-moving hard tech, physical tech, company I’ve ever seen. Part of that is just because of what we do. We solve water. 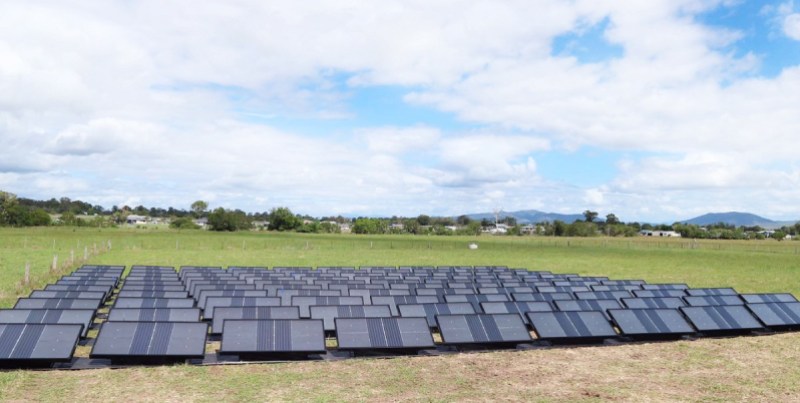 Above: Source Hydropanel Field has a bunch of water extractors.

VentureBeat: How much does one of these cost now? Is it coming down?

Friesen: Yes, it’s coming down. The price for a home is still the same in the sense that — we’re just putting up a couple of panels at a time, obviously. But when we start talking about large arrays and Source Fields, where we’re able to gain the benefits of that scale, we’re able to significantly reduce the cost. That continues to come down.

Of course it’s not just cost per panel, but cost performance. Because the performance is increasing all the time — this is half the size of that, and it makes the same amount of water. Those performance gains that come from the thermodynamic and materials and machine learning advancements we’ve made — a combination of all those things has enabled us to move productivity forward. There’s two ways to do this, right? One is to keep gaining on the performance side, and the other is to keep gaining on scale so we can reduce that cost. There’s that quotient at work.

VentureBeat: Do you have a pretty big factory now, out there in Arizona?

Friesen: Yes, we do all the final integration in Arizona. We want to make sure — because we’re talking about water, we want to control the supply chain very tightly.

VentureBeat: We’re starting to see conflict over water in places like Syria.

Friesen: Vice just had their article about that. The drought killing 85% of the livestock caused 1.5 million farmers to move into towns. That causes economic stress that leads to civil war. That’s water. And then you think about the fact that the Euphrates is basically a sewage line going from Iraq to the Gulf. The wars that have been fought over those rivers — it’s been a long time. 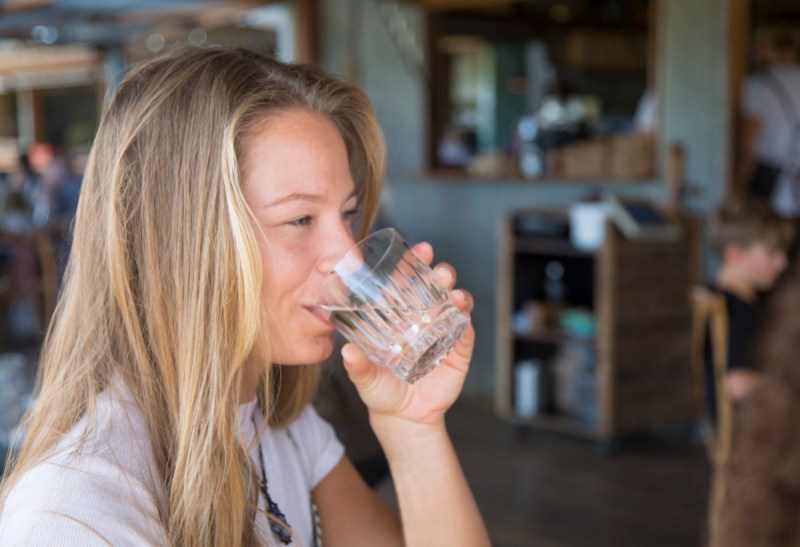 VentureBeat: And Australia is on fire now.

Friesen: They say it’s over a billion animals now. One of the things we’re keen to communicate is, what we’re talking about here is renewable water. We’re talking about applying the principles of renewable energy to a resource. When you think about climate change — or climate changed, because it’s no longer in the future — you ask the question: of the global energy mix, only 20% is electricity. Even if you cover that all with renewables, there’s still 80% left. That’s transportation, embedded energy in the food you eat, the water you drink, and the stuff you buy. There’s a ton of embedded energy in all of this.

It turns out the food piece is way bigger than the electricity piece. The question becomes, when you start to think about doing something in renewables 2.0 — OK, if we go in the resources direction, what would have the biggest impact on people who need to accommodate and adapt for the fact that climate is changing? That’s why we went into water. Now you prove this point. You can do renewable resources in a way that does for water what solar did for electricity. It’s an incredibly humbling business to build. It’s a hell of a lot of work, but at the same time, you have these pictures of kids somewhere who have water now where they didn’t have it before.