Right on schedule, Microsoft today launched its new Edge browser based on Google’s Chromium open source project. You can download Chromium Edge now for Windows 7, Windows 8, Windows 10, and macOS directly from microsoft.com/edge in more than 90 languages. This is Edge 79 stable, for those who like tracking version numbers. Edge 80 is slated to arrive in early February, and afterwards Microsoft will stick to a six-week cadence for stable releases, just like with Chrome.

Microsoft has yet to lay out which features will ship in Edge 80, Edge 81, and so on. When asked what to expect from the next few Edge releases, a spokesperson said developers and users should use the beta releases as an indication. If you want to peek at the pipeline, download one of the Edge Insider Channels: Beta (updated every six weeks), Dev (updated weekly), or Canary (updated daily). Insider builds can be installed side by side with Edge stable. Update: Microsoft has published a support article that lists features in the works and requests that are not currently on the roadmap.

It’s worth noting that the new Microsoft Edge, as Microsoft is calling it, has a fresh logo. For the first time in decades, Microsoft’s browser is not denoted with a blue “e” — the logo is a wave, presumably for “surfing” the web. 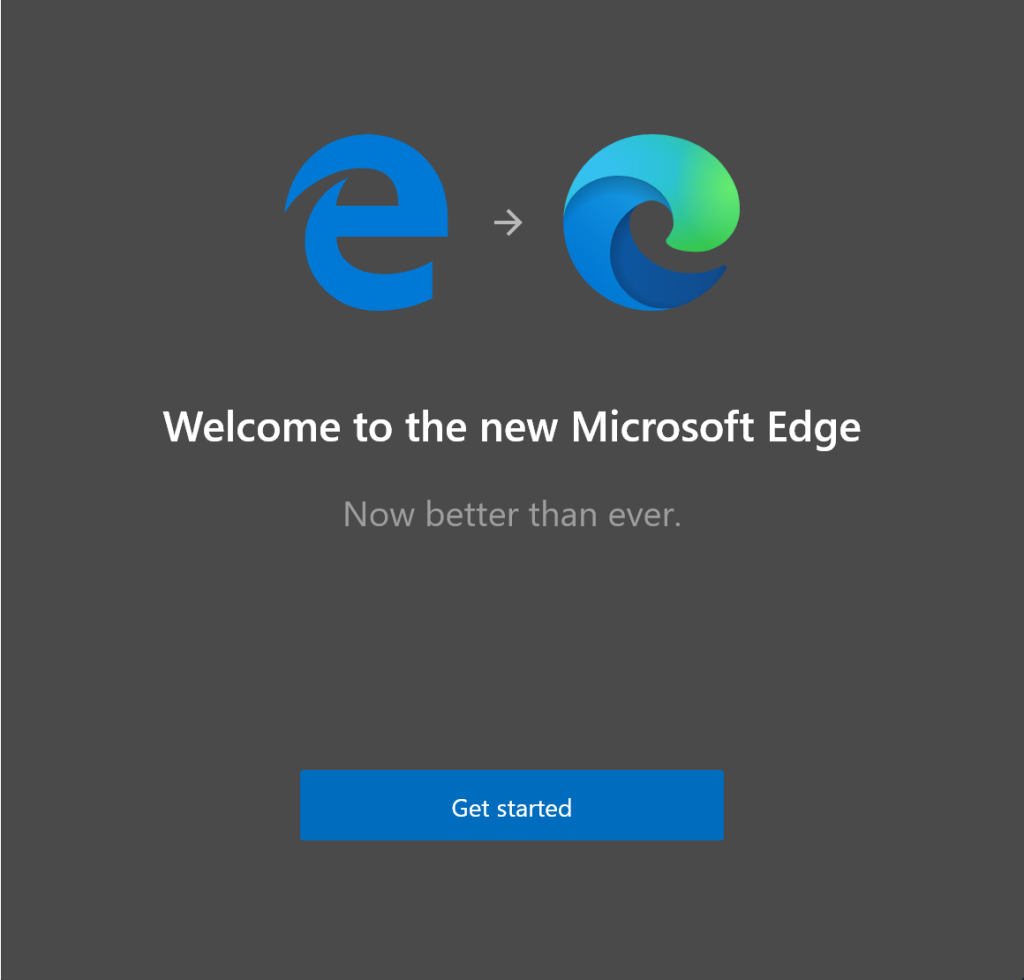 Microsoft plans to ship more consumer Edge features later this year, but this launch is largely targeted at businesses. That means AAD support, Internet Explorer mode, and Microsoft Search in Bing integration. Business and education IT administrators can download offline packages and policies for Chromium Edge. Many businesses already use Chrome and at least one Microsoft browser (Internet Explorer and/or Edge) — Microsoft is hoping these features will get them to switch to using just Chromium Edge. 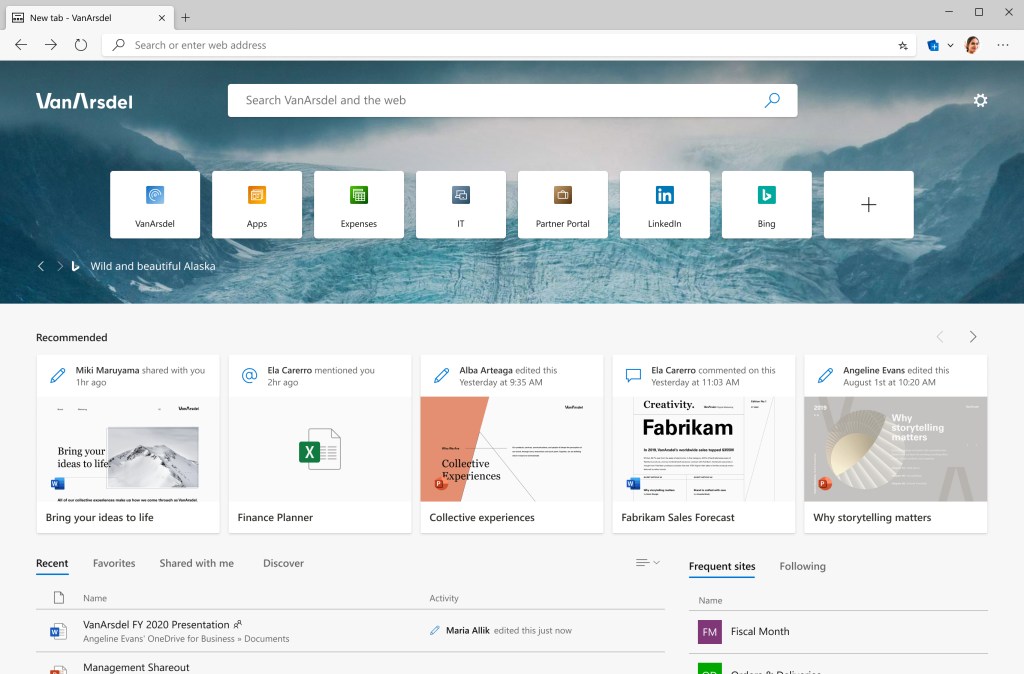 Business features aside, there’s also support for Chrome-based extensions, 4K streaming, Dolby audio, inking in PDF, and privacy tools. For the last one, it’s worth noting that tracking prevention is on by default and offers three levels of control, like Firefox’s tracking protection.

There are still a few features missing from Chromium Edge, most notably history sync and extension sync. Microsoft is working on these and some other inking functionality that it still wants to port from legacy Edge, as Microsoft is calling it.

Microsoft also claims that Chromium Edge is twice as fast as legacy Edge. Curiously, the team isn’t making any claims against other browsers — at least not yet. In fact, our own testing shows Chromium Edge has solid performance.

The bigger picture here is that by leaning on Chromium, Microsoft no longer has to worry about “fixing” its underlying browser engine EdgeHTML. The company can instead improve Chromium itself, which helps all browsers that use the codebase, not just Chromium Edge. Microsoft says over the past year it has made more than 1,900 contributions to Chromium across areas like accessibility, touch, speech, and digital inking.

On the flip side, Edge is now just another Chromium-based browser. That makes it all the harder to offer a differentiated experience. Having failed with EdgeHTML, Microsoft figures Chromium is worth a shot.

If you’re running Windows 10 and don’t install Edge manually, you’ll eventually get it in a future update. Microsoft plans to start rolling out the new Edge “in the coming weeks,” starting with a subset of Windows Insiders in the Release Preview ring. The process will ramp up to more users “over the next several months.” It will be made gradually available on Windows Update and offered to additional devices “as data and feedback indicate that users are having a good experience.” Microsoft currently has no plans to automatically upgrade Managed, Enterprise, Education, or Workstation Pro Edition devices (documentation). If you want to block automatic delivery of the new Edge to Home and Pro devices, you can do so either via policies or the Blocker Toolkit.

When you install the new Edge on Windows 10, it will replace legacy Edge. Any shortcuts you have on the desktop, taskbar, or Start Menu will be updated to new Edge. The executable for legacy Edge is technically hidden, but it will be removed eventually. Your favorites, passwords, form fill information, and basic settings will carry over from legacy Edge to new Edge automatically. If you have Chrome or Firefox installed, new Edge will ask if you want to import those settings from there. Web apps built on EdgeHTML and Edge preview channels will continue to work without interruption. Depending on how up-to-date your Windows 10 installation is, you may be asked to install additional updates. A future version of Windows 10 will skip all this and include new Edge by default.

When you install new Edge on Windows 7, Windows 8, and macOS, it will work just like installing any other browser. New Edge will not replace whatever you have as the default (whether that’s Internet Explorer, Safari, or a third-party browser). Yesterday, Microsoft ended support for Windows 7, so it’s notable the company is still releasing new Edge for the decade-old operating system. It shows just how big Windows 7 still is — about one in four computers run it.

On Android and iOS, new Edge will replace old Edge automatically. That said, not much is new on mobile — Edge already uses Blink/Chromium on Android and WebKit/WKWebView on iOS. But you can expect the new logo, similar user interface to the desktop versions, and tracking prevention on iOS (coming soon to Android). More desktop features will make their way to Android and iOS over time.

Lastly, Microsoft’s FastTrack and App Assure programs cover Chromium Edge. The former means Microsoft will help you deploy Edge to your organization at no extra charge with an eligible subscription to Microsoft 365, Azure, or Dynamics 365. The latter means if your sites work in Internet Explorer 8 and above, Chrome, or legacy Edge, then they’ll work on the new Edge. If not, Microsoft will help you fix them at no additional cost.