Industrial robots and warehouse automation are lucrative intermingling markets, as evidenced by Berkshire Grey. The Lexington, Massachusetts-based company, which combines AI and robotics to automate omnichannel fulfillment for retailers, ecommerce, and logistics enterprises, today announced that it has secured a mammoth $263 million in series B funding led by SoftBank. Khosla Ventures, New Enterprise Associates, and Canaan participated in the round. CEO Tom Wagner says the fresh capital will fuel the startup’s global expansion, acquisitions, and team growth.

“With our intelligent robotic automation, our clients see faster and more efficient supply chain operations that enable them to address the wants of today’s savvy consumer,” said Wagner, who previously served as iRobot’s chief technology officer.

Berkshire Grey — which emerged from stealth in 2018 after five years of development, and whose team is staffed with alumni from Kiva Systems, Uber, Tesla, and Carnegie Mellon University — provides AI-imbued, cloud-hosted software that leverages a custom framework to achieve continuous improvement.

It logs real-time data to inform future decisions and generate intelligent product-handling and process-operating behaviors, such that each system learns from its own activities, as well as from other systems within a facility or deployments across the client network. Berkshire Grey’s platform constantly reacts to changes in the environment (e.g., containers filling or emptying and products shifting) in order to optimize real performance, and it performs preemptive self-diagnoses for preventative maintenance purposes.

On the computer vision side of the equation, 2D and 3D perception technologies and a battery of camera technologies enable the software to manipulate visual data and act upon a large array of items and materials. Combined with motion planning techniques and simple environmental descriptions for input, Berkshire Grey’s robots are able to automatically and intelligently move through locations.

Some of the robots handle products using patented gripping technologies that enable accurate picking and placing. Their grippers are outfitted with sensors that send signals like tactile pressure, light beam, and accelerometer readings to the AI, coupling them with visual data to react in real time.

AutoPick uses industrial robotic arms to pick hundreds of thousands of different items with fluid and dynamic movements. The robots’ grip force, motion profiles, swing velocities, accelerations, and placement tolerances can be customized down to the SKU level. As for Berkshire Grey’s FlexField family — which comprises FlexTiles, FlexFeeds, and FlexBots — they serve totes of products to AutoPick units that pack and store customer orders while parallelizing delivery where needed. 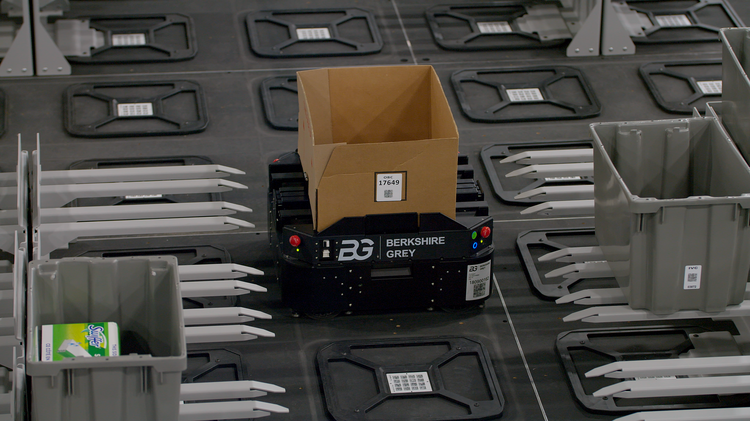 Berkshire Grey’s systems are designed to play nicely with existing IT infrastructure, including chain and maintenance management software, and to plug into commonly used APIs. They also offer a web-based management dashboard for tracking work progress and monitoring system performance on desktops and mobile devices, with common metrics and operational statistics such as picks-per-hour and order completion status, as well as push notifications related to order status and inventory availability.

Berkshire Grey says its products are used by Fortune 50 customers to reduce picking costs in break pack and ecommerce operations by 70- 80% and that typical retail and logistics customers see improvements in throughput of 25% to 35%. “Our customers from leading enterprises in retail, ecommerce, and logistics are selecting Berkshire Grey as a competitive differentiator,” added Wagner.

As alluded to, robotics is a hot segment — the warehouse robotics market alone is anticipated to be worth $4.44 billion by 2022, according to Markets and Markets — and with good reason. Roughly 60,000 employees handle orders in the U.S., and companies like Apple manufacturing partner Foxconn have deployed tens of thousands of assistive robots in assembly plants overseas. Even so, a mere 30% of warehouses in the U.S. are operating efficiently, according to a study by the Georgia Institute of Technology.

Perhaps unsurprisingly, Amazon acquired robotics company Kiva Systems for $775 million in March 2012. And last November DHL announced it would invest $300 million to modernize its warehouses in North America with internet of things sensors and robots.

Among the startups presenting solutions to the fulfillment challenge are Brain Corp, which develops a proprietary operating system — BrainOS — and off-the-shelf hardware and sensors that let companies build custom robotics, and Osaro, a San Francisco startup developing an AI-based platform for industrial robots. That’s not to mention GreyOrange, a robotics systems company that nabbed $140 million in funding in September 2018, and startups like Attabotics and CommonSense Robotics, which have raised tens of millions of dollars for compact automated fulfillment centers that can slot into tight spaces, like underground garages.