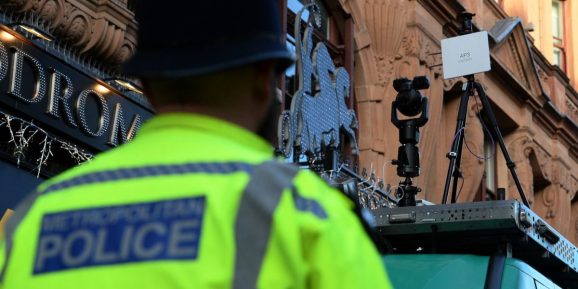 Facial recognition technology in use in Leicester Square in London.

(Reuters) — British police are going to start operational use of live facial recognition cameras in London, despite privacy warnings from rights groups and concerns expressed by the government’s own surveillance watchdog.

“The use of live facial recognition technology will be intelligence-led and deployed to specific locations in London,” the city’s Metropolitan Police said in a statement on Friday.

“This is an important development for the Met and one which is vital in assisting us in bearing down on violence.”

The cameras will be clearly signposted, and officers will hand out leaflets about what is happening.

Facial recognition cameras have been deployed in other British cities and shopping centers, but their use has prompted privacy concerns, and opponents have questioned the accuracy of the technology.

Last year, a Cardiff man took South Wales Police to the High Court, arguing that his human rights had been breached by officers using automated facial recognition without his knowledge when he was shopping.

The court ruled that using the technology was lawful, but civil rights group Liberty is appealing the decision.

Responding to the ruling last September, the government’s Surveillance Camera commissioner, Tony Porter, said police should not see it as a “green light” for generic deployment of automated facial recognition.

“It is an intrusive tool with human rights and public confidence implications which have to be considered,” Porter said.

The EU is considering banning the technology in public places for up to five years to give it time to work out how to prevent abuses.

Metropolitan Police assistant commissioner Nick Ephgrave said in a statement: “We are using a tried-and-tested technology and have taken a considered and transparent approach in order to arrive at this point.”

“This is an important development for the Met, and one which is vital in assisting us in bearing down on violence,” he added.

He said police will begin operationally deploying LFR in places where intelligence suggests they are most likely to locate serious offenders.