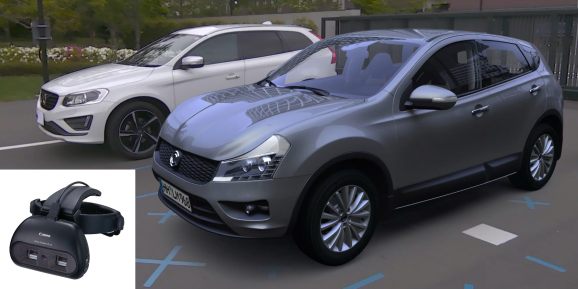 Camera giant Canon isn’t a major player in the augmented reality headset space, but it has been selling an $82,000 enterprise-class AR headset to Japanese customers since 2016. Today, the company announced a sequel that promises even higher-fidelity AR visuals — enough to “fuse the real world with 3D CG in real time” — for businesses including car makers.

Looking more like an optometrist’s tool than a pair of glasses, the new Mreal Display model MD-20 includes twin screens inside a black plastic housing, held in front of the user’s face with a large padded head ring. The odd design enables Canon to include atypically high-resolution 2,560 x 1,600-pixel displays for each eye, and achieve a large 70-degree horizontal by 40-degree vertical field of view. Canon’s latest screens operate at roughly 60 frames per second and cover 99% of sRGB colors, using graphics provided by a tethered PC.

Another element is a front-facing camera with a “uniquely developed global shutter” that uses three CMOS sensors, matching the wearer’s line of sight with high-precision compositing of real and computer-generated imagery. Canon claims that the MD-20 generates real-time spatial maps that precisely account for the user’s current location and field of view, so that digital objects — the car on the right, above — will seamlessly integrate with real ones, such as the car on the left. Optional external markers and sensors can also be used to provide 3D positioning data without on-device mapping.

Beyond just visualizing photorealistic 3D objects, MD-20 can display virtual touch menu interfaces for controls and access multiple applications — more than 10, Canon says, including third-party apps. The headset appears to be compatible with Mreal software developed for the predecessor model, MD-10, which had a narrower 60-degree horizontal field of view, 1,920 x 1,200-pixel resolution, lower color gamut, and 54Hz frame rate. Even in prototype form, the new model weighs only 60% as much as its predecessor — 620 grams versus 1,040 — though Canon hopes to reduce the weight further ahead of its general release.

There’s no specific timeline or pricing yet for MD-20’s sale to interested companies, but the prior model’s ¥9 million (~$82,260) price tag suggests that it could be sky high. That said, increased competition in the enterprise AR space could bring this model closer to earth: Companies such as Varjo are offering enterprise-class mixed reality headsets in the $10,000 range, combining AR and VR capabilities for businesses. Users interested in seeing MD-20 in person can visit the 28th 3D & Virtual Reality Exhibition, running from February 26-28 at Japan’s Makuhari Messe.