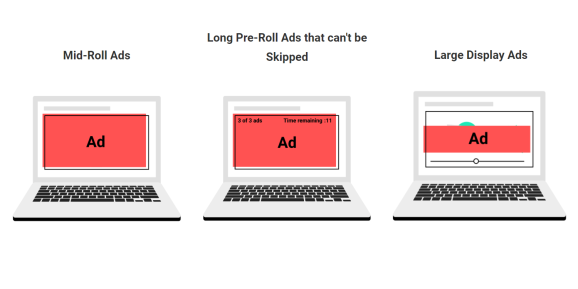 Google today announced that Chrome’s ad blocker is expanding to video on August 5, 2020. As with previous ad blocker rollouts, the date is likely not tied to a specific Chrome version — Google will be expanding the scope of its browser’s ad blocker server-side. YouTube and other websites with video content will have to review their ads to make sure they are compliant.

Not many people know that the world’s most popular browser has a built-in ad blocker. Two years ago, Google joined the Coalition for Better Ads, a group that offers specific standards for how the industry should improve ads for consumers. In February 2018, Chrome started blocking ads (including those owned or served by Google) on websites that display non-compliant ads, as defined by the coalition. When a Chrome user navigates to a page, the browser’s ad filter checks if that page belongs to a site that fails the Better Ads Standards. If so, network requests on the page are checked against a list of known ad-related URL patterns and any matches are blocked, preventing all ads from displaying on the page. In July 2019, Chrome’s ad blocker rolled out globally.

The Coalition for Better Ads today announced a new set of standards for ads that show during video content, based on research from 45,000 consumers worldwide. There are many different types of ads that can run before, during, or after a video, but the Coalition is banning just three for videos less than 8 minutes long.

Here is how the Coalition defines the three banned video ads.

The Coalition has given website owners four months to stop showing these ads to their site visitors. But the rubber will really hit the road on August 5, 2020, when Chrome will enforce the rule. Again, Chrome will stop showing all ads on sites in any country “that repeatedly show these disruptive ads.”

Notably, Google says that YouTube, which is owned by Google, “will be reviewed for compliance with the Standards.” The company will also update its product plans across all its ad platforms as a result of the latest standard update.

If you’re a site owner or administrator, use Google Search Console’s Ad Experience Report to check if your site contains abusive experiences that need to be corrected or removed. If any are found, you will have 30 days to fix them before Chrome starts blocking ads on your site. Google will update the Ad Experience Report this week with information to help publishers resolve any issues with these new video standards currently on their site. More information is available in the Help Center and on the Community Forum.