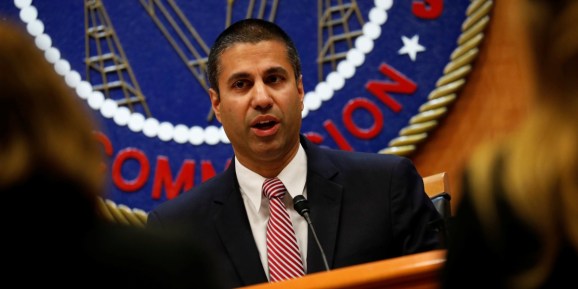 (Reuters) — Federal Communications Commission Chairman Ajit Pai on Thursday proposed $9.7 billion in incentive payments to accelerate the freeing up of spectrum in the key C-band by shifting existing satellite users.

The telecommunications regulator had told lawmakers last month it was considering proposing “single-digit billions” in payments. Major satellite firms, including Intelsat, are expected to back Pai’s proposal to shift them to different parts of the spectrum band, a person briefed on the matter said.

Pai said in a speech on Thursday he backed the accelerated relocation payments to “make available the C-band for 5G deployment as quickly as possible” and to “align the satellite companies’ private interests with the public interest.”

The C-band is a block of spectrum used by satellite company customers to deliver video and radio programming to 120 million U.S. households. Pai said an auction to use the freed spectrum will begin on Dec. 8 and is critical to the deployment of 5G wireless.

Pai said he expects the actual costs of relocating satellite companies is in the $3 billion to $5 billion range.

Pai said he wants to fund transition and incentive payments with a surcharge paid by winners of an auction of 280 megahertz of the C-band.

Major satellite service providers including Intelsat, Telesat, and SES, which form the C-Band Alliance, said last month they were seeking “fair compensation” to quickly clear the spectrum. They argue that without their cooperation, “this critical 5G spectrum will not be made available for at least 10 years.”

U.S. Senator John Kennedy, a Republican, said the $9.7 billion figure “is much too high, and it’s highly unfair to those taxpayers.” He added, “We shouldn’t be in the business of spearheading Luxembourg bailouts when there are towns in Louisiana and across the country without access to broadband service.”

Kennedy has proposed a bill with some Democrats to sharply limit how much in compensation satellite firms could receive.