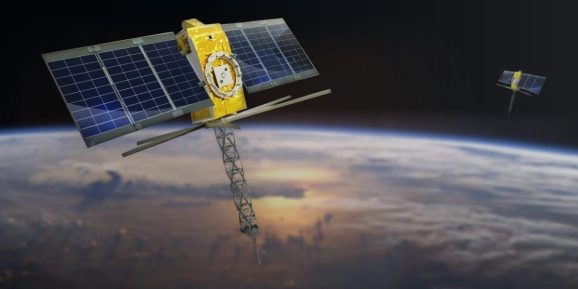 Kinéis has raised $110 million in venture capital to create a constellation of nanosatellites that target internet of things objects.

Based in Toulouse, France, the space startup is a spinout from aeronautics giant CLS, which develops a range of space technologies, including satellites. The company remains the biggest shareholder, with 32% ownership, but it spun Kinéis out last year to allow it to concentrate more narrowly on its IoT mission.

Kinéis is building satellites that weight abound 65 pounds. The company has already launched eight satellites, with plans to launch a total of 25 by 2022.

As part of this system, Kinéis has developed a radio chipset that is 7mm x 7mm, has low power consumption, and can be placed inside a wide range of objects, allowing them to communicate with the satellite network.

That network is an extension of the Argos satellite network, which has been around since the 1970s and been used by the scientific community for research purposes.

The French startup joins a growing race to fill the skies above with satellites that drive new forms of connectivity. OneWeb, which is building a network of 600 satellites to deliver internet service, will begin its regular launch activity on February 6. Meanwhile, Elon Musk’s SpaceX recently launched its fourth series of rockets into orbit.

But with its focus on IoT, Kinéis will likely find its main competition much closer to home, in the form of Toulouse-based Sigfox. Rival Sigfox has built a terrestrial communications network for IoT objects in partnership with telecommunications providers.

CLS is a subsidiary of the French Space Agency CNES and CNP Technologies. The round of funding was led by CLS, but it includes money from CNES, France’s state bank Bpifrance, Ifremer, Thales, CELAD, BNP Paribas, and handful of industrial partners.