To navigate this challenge, the Finnish city of Espoo is conducting experiments that mix consultations, transparency, and limited use cases to demonstrate the potential of civic AI. Espoo has already conducted AI trials that initially required overcoming technical hurdles but ultimately improved city services. Over the long-term, the city is crafting a model that places ethics at the center of its AI plans by ensuring citizens can understand how these systems work and participate in debates about their implementation.

Though the plan is still very much in its early stages, the city hopes to blaze a trail that other governments can follow.

“I think Finns trust the government and the public sector more than [citizens] in any country in Europe,” said Tomas Lehtinen, data analyst consultant for Espoo. “We wanted to keep that trust in the future. And so we wanted to be transparent about this project for citizens, but also because many of our employees also don’t understand AI.”

Espoo is Finland’s second-largest city, with a population of around 284,000, and is located just 13 miles west of Helsinki, along the country’s southern tip.

Outside of Finland, the city is perhaps best known as the longtime home to Nokia’s headquarters. But it also boasts a strong cluster of other tech companies, with offices from giants like Microsoft and startups such as IQM Quantum Computers. These companies are drawn in part by the chance to work with the wealth of tech research talent at Espoo’s major engineering universities: VTT and Aalto.

That highly technical professional population is just one of Espoo’s built-in advantages when it comes to civic AI. Another is ownership of its data, thanks to the way many government services are structured in Finland, with the cities providing benefits such as housing, education, and social services. Rather than having to negotiate with national agencies, Espoo has maintained local control of data going back to 2002, when all government operations were digitized.

Still, Lehtinen said exploring the use of AI posed enormous challenges from both technical and social standpoints. To address some of these issues, the city partnered with IT services company Tieto, which developed a platform called Intelligent Wellbeing that uses AI to analyze health care data.

Tieto helped Espoo combine the social and health data of all Espoo residents, as well as data for early childhood education programs. That may sound like a simple task, but governments everywhere typically keep such information in separate silos, often in different formats, using various fields and methods of identifying people receiving the services. Tieto’s wellness platform runs on Microsoft Azure, so the company used Azure Data Lake, which restructured the data from different sources to create a single view of each resident.

This effort included data from 520,000 people who had made 37 million contacts with Espoo government services. During the process, the information was anonymized and encrypted. So while the system could match all the data from a resident, no one looking at the data would be able to discover the identity of the person. Assuring residents that the system would render such information anonymous while also preventing any potential mischief, was a key step toward building trust, Lehtinen said.

Once the data sets were merged, Tieto’s algorithms analyzed the information and defined 280 risk factors that could potentially play a role in determining whether a family is likely to need some kind of child welfare services. The algorithms then looked for patterns across the data and grouped all individuals into 20 segments informed by a combination of risk factors that seemed to contribute to their use of services.

For instance, in the chart below, Segment 3 included risk factors related to alcoholism, while Segment 0 tended to be people with colds or flu.

The analysis showed that about 80% of users of all city services fall into Segment 0, and they use about 20% of all city resources. In comparison, Segment 3 is a small percentage of residents, but they use 70% of city services. These might be people who get drunk as part of an ongoing problem with alcoholism and as a result suffer an injury that requires hospitalization. Because social services and health care had two different data sets, the link between addictions and accidents might not have been obvious otherwise.

In theory, the city might be able to save costs on hospital treatments by increasing alcohol treatment services, Lehtinen said. And going forward, the segments could be used in game theory models to predict how various increases or decreases in resources for different programs could impact residents — as well as costs — for different city agencies.

“Now we understand in a more complex way what kind of different groups are using our services,” he said. “With this segmentation analysis, we can see individuals as a whole person as they use our services.”

To further test the AI’s data analysis capabilities, the city ran a limited experiment involving immigrants. Like much of Europe, Espoo and Finland are experiencing huge waves of immigration, often including refugees fleeing their homelands in the face of humanitarian crises. Espoo projects its immigrant population will increase 30% by 2030.

A large number of immigrant kids were ending up in foster homes, and city leaders wanted to know why. As in the previous example, they created a singular view of data related to immigrants who were using city services, and in this case they created three segments: heavy services (such as foster care), medium services, and light services (such as language training and job hunting assistance).

The AI analysis clearly showed that immigrants who accessed such light services tended not to move up the ladder to more intensive and expensive services. But those who did not use the lighter services often escalated quickly into the middle and then highest groups. So the city made a big push over the course of the year to expand its outreach for programs such as language training and job searching, leading to a swift rise in the number of immigrants using those lighter services.

During that year, the percentage of immigrant kids in foster care programs dropped from 45% to 24%.

“The results have not been achieved through massive resource increases, but a better understanding of the customer service processes,” Lehtinen said. “This is something we could not have done without this AI.”

As Espoo considers its next steps, it must first negotiate with Finnish and European officials to determine how to navigate the General Data Protection Regulation (GDPR) that went info effect after the city’s initial experiments. While city leaders are confident they can find a way to continue their  AI efforts under GDPR, Lehtinen said they want to move cautiously to ensure the program doesn’t run afoul of EU rules.

In the meantime, the city has been building a broader foundation to pursue future AI projects. These include organizing more than 50 local screenings of a documentary called Who Made You, by Finnish director Iiris Härma. The film explores AI, robotics, and automation, and the director attended several screenings to answer questions from attendees.

Lehtinen said the city wants to inspire residents to become more educated about AI so they will be better prepared to participate in future discussions about algorithm policies. To that end, Espoo has been encouraging locals to sign up for a free online class about AI and robotics called “Elements of AI” that was developed by the University of Helsinki.

But even more ambitious is a partnership called “Citizen Trust Through AI Transparency.” This project brings Espoo together with the city of Helsinki, Kela (the Social Insurance Institution of Finland), Finland’s Ministry of Justice, Finnish Innovation Fund Sitra, and an Espoon startup called Saidot.

The project is designed to identify elements of any public sector AI system citizens should have a right to know about and then establish guidelines and templates that will allow governments to disclose such information in a format that is easy to access and understand. The project is being led to a large degree by Saidot, which was founded in 2018 to develop tools that would help public agencies make their AI efforts explainable.

“Transparency and accountability are really the fundamental questions in this whole discussion,” said Meeri Haataja, CEO and cofounder of Saidot. “Without transparency and explainability, we don’t have any way to understand if there are any ethics or principles in place.”

The first step was to create a list of technical identifiers for an AI algorithm. The idea here is to break the components of the algorithm into parts that can be explained to the average person. These include nine large categories that cover such classifications as the sources and types of data, how and why that data is used, which agencies are using it, and a contact for someone who is responsible for managing the algorithm. 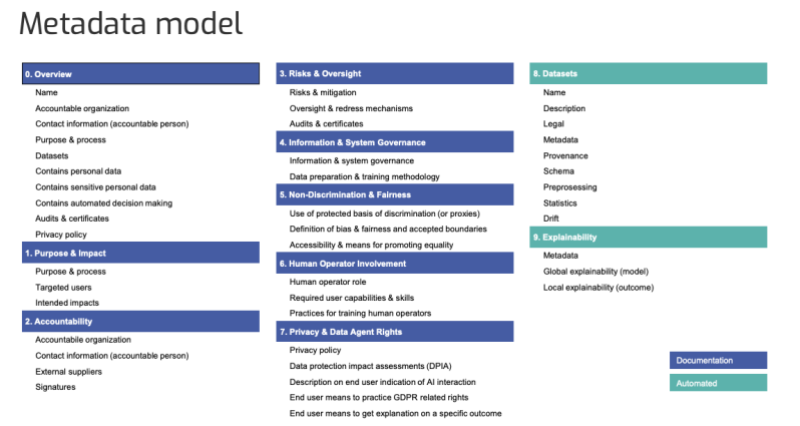 Behind the scenes, Saidot’s platform helps governments manage and track the different technical elements. These will eventually include information on any third parties that play some role in terms of offering services, software, or hardware, Haataja said.

“Our customers can basically register on our platform and then create this inventory of the algorithms that they have within the city,” she said.

As part of this project, the group also developed templates for the city’s websites that are now available under a Creative Commons license. By standardizing not just the type of algorithm information cities share but the way they make it available, the group hopes citizens will more easily learn how to navigate such information services, rather than having to adapt to the quirks of each government’s design or vocabulary.

To create another layer of trust in civic AI, Haataja is leading a commission called the Ethics Certification Program for Autonomous and Intelligent Systems (ECPAIS), created by the IEEE global technical organization. Espoo is a partner in this program, which is developing the criteria to enable third parties to develop AI audit and certification processes.

The idea is that cities will undergo regular audits by approved organizations and then include those reviews in their AI portals. Having common web templates that use a consistent UI and terminology should help facilitate those audits, Haataja said.

Espoo is hoping to have its AI portal online later this year as part of a broader website redesign. Meanwhile, Saidot has also been working with the cities of Helsinki and Amsterdam, which are expected to go live with their AI websites later this spring. Going forward, Saidot is working to promote the project so that additional governments sign on.

The more governments adopt this standard approach to transparency and explainability, Haataja said, the more citizens will understand and trust AI. Given the growing role of digitalization in public life, such visibility plays a critical role in allowing citizens to remain active participants in civic development.

“Every one of us as individuals and citizens of our own countries and cities must start to ask the same questions about AI and demand the same information,” she said. “It’s our right as citizens. This [guarantees] that we as citizens are doing our part in oversight over how our local government is working. It’s an essential part of democracy.”