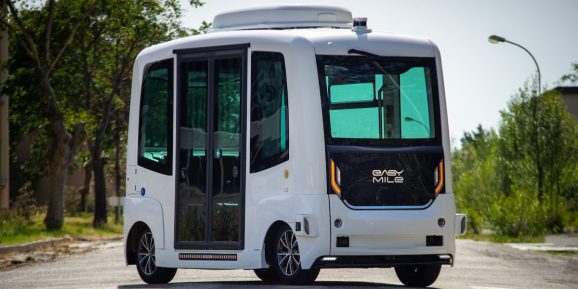 When it comes to accidents involving self-driving vehicles, the rules seem to be fuzzy, and recent actions by U.S. regulators aren’t likely to clarify things.

Case in point: On Tuesday, an autonomous shuttle that was built by France’s EasyMile and is being tested in Columbus, Ohio activated its emergency breaking system, causing a passenger to slide off the seat. The passenger was taken to the hospital to be evaluated but didn’t appear to be seriously injured.

Still, the National Highway Traffic Safety Administration (NHTSA) halted passenger trials of EasyMile shuttles across the U.S. until the agency had the results of various tests. The shuttles run on limited, defined paths and can continue to do so without passengers onboard.

“Our vehicles are being allowed on the road for testing in each of the 10 states where NHTSA is performing its review,” said EasyMile’s U.S. senior VP Sharad Agarwal in a statement. “This is a clear indication it too considers them safe for other road users, cars, pedestrians, etc.”

The move to suspend passenger trials came the same day the National Transportation Safety Board offered a blistering critique of the NHTSA’s handling of a fatal 2018 Autopilot crash involving a Tesla car. The oversight agency took the NHTSA to task for its “hands-off approach,” according to its report. The safety board also noted that while NHTSA has investigated 14 Tesla crashes that may have involved Autopilot, the agency has yet to take any action against Tesla.

Interesting that @NHTSAgov has suspended passenger operations for EasyMile self-driving shuttles because a lady fell off a seat. But act on Tesla Autopilot, per @NTSB recommendations from actual deaths? Nahhhhhh.

I mean look…EasyMile shuttles are glorified golf carts running on poor technology, but shutting its operations down while leaving Tesla untouched is totally bogus https://t.co/VNLWYu6hcm

EasyMile’s suspension is likely to be a short one. The trial in Columbus began in early February and involved two shuttles driving a 2.9-mile circuit at speeds under 25 miles per hour with a human operator onboard at all times.

EasyMile claimed this was the first such test of a self-driving shuttle in a residential area in the U.S. Typically, such autonomous shuttles have been conducting trials in limited, non-public spaces, such as waterfronts, roads around warehouses, or gated communities.