Facebook is rolling out a new version of Messenger for iOS from today, built with speed and responsiveness firmly in mind. The upgraded app, built on a new code base, also lays the foundation for Facebook’s previously stated goal to unite all its apps and make it possible for people to message between Facebook, Messenger, Instagram, and WhatsApp.

The new version of Messenger was built under an internal program called Project Lightspeed, which Facebook announced at its annual F8 conference last April.

Facebook first siphoned off Messenger into its own standalone app way back in 2011, and arrived on its own dedicated web domain four years later. For context, the existing Messenger app for iOS had a binary size of 130MB at its peak, according to Facebook, whereas the new incarnation is a mere 30MB — roughly 75% smaller.

To enable this, Facebook said that it reduced the app’s code by 84%, shifting from more than 1.7 million lines to around 360,000. The company also used this opportunity to trim and simplify the app, including removing the number of versions of the contact list in the app from 40 to just one — before now, the contact list was displayed in various ways across the app depending on factors such as whether the user was searching for a contact or adding someone to a conversation; Project Lightspeed served as the bedrock to create a simpler contact list template.

It’s worth noting here that this update constitutes part of a broader Messenger overhaul that has been ongoing for a number of years now. This includes a simpler interface with just two main tabs — People and Chats — at the bottom, and no Discover tab. 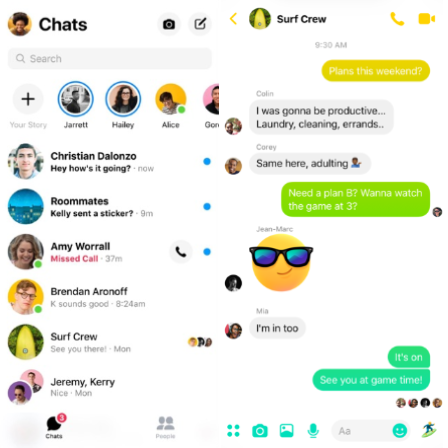 For background, Facebook launched the Discover tab nearly three years ago, and it was designed to help users find new chatbots and businesses. However, last year Facebook revealed plans to ditch the Discover tab altogether. The redesign has been rolling out incrementally for a few months already, and the company confirmed to VentureBeat that it will be launching for even more people starting this week.

However, it’s what is happening under the hood that is arguably the most important factor at play here. A smaller app should translate into a faster experience for the user, including load times and downloads. This is particularly important for those on older iPhones or in regions where fast connectivity is less abundant — fewer megabytes means quicker app updates.

“We rebuilt our features to fit a new simplified infrastructure,” noted Raymond Endres, VP of engineering at Messenger, in a blog post. “While we kept most of the features, we will continue to introduce more features over time. Fewer lines of code makes the app lighter and more responsive, and a streamlined code base means engineers can innovate more quickly.”

Rewriting an entire codebase was a major endeavor, eventually consuming the time and effort of more than 100 engineers. But the decision to proceed with Project Lightspeed was ultimately prodded by early testing that highlighted how big an impact the rewrite would have on the end user.

“In most cases, the enormous effort required to rewrite an app would result in only minimal, if any, real gains in efficiency,” added Facebook engineer Mohsen Agsen. “But in this case, early prototyping showed that we could realize significant gains, which motivated us to attempt something that’s been done only a few times before with an app of this size. It was no small undertaking.”

A company spokesperson also confirmed to VentureBeat that while it is building the Messenger app with each mobile platform’s “unique strengths” in mind, it is also planning to add some of Project Lightspeed’s elements to Android in the future — this will likely include creating a new server framework and building the app in a “reusable” way.

Last March Facebook cofounder and CEO Mark Zuckerberg penned a public post outlining his vision for a more privacy-focused social network, much to the internet’s amusement. Part of this entails building end-to-end encryption into all of its products and making them interoperable — that is, people on any of Facebook’s properties will eventually be able to communicate with each other regardless of which Facebook-owned app they’re using. And this is partly what Project Lightspeed is about.

“LightSpeed not only makes the app smaller, faster and simpler for our users, it also lays the foundation to fulfill our vision for private messaging and interoperability across apps, allowing us to scale our messaging experience in the future,” Endres said.

The new lightweight Messenger app will be rolling out starting today, and will continue over the next few weeks.