TCL isn’t a particularly well-known smartphone brand outside of China, but the Huizhou-based company acquired the rights to design and sell BlackBerry-branded phones back in 2016, though that licensing partnership ends later this year. It’s worth noting that TCL has emerged as one of the top TV manufacturing brands in North America, with Roku serving as a major technology partner. But TCL is eager to push deeper into the smartphone realm and move beyond the “whitelabel” approach it used to release phones under the Alcatel and Palm brands.

Glimpse of the future

At CES 2020 in Las Vegas in January, TCL debuted a trio of new devices, including a 5G smartphone and a foldable phone. These are pretty much good to go, though they are not yet available to buy. In the meantime, the company is letting the public peer just a little bit further into the future with a prototype smartphone that features a “rollable” display.

The device, which doesn’t yet have a name, price, or availability date, appears to be more a show of technology than anything else. But TCL has provided visuals that give a pretty good idea of how it works. Unlike many of the foldables that have gone to market, TCL’s incarnation leverages flexible AMOLED technology for a display that slides out, turning the device’s slimmer smartphone dimensions into more of a phablet-esque form factor.

The smartphone, which is 9mm thick, uses internal motors to expand the default 6.75-inch screen by a little more than an inch with the press of a button.

According to TCL, this opens the door for “an entirely new user experience,” which includes split screen and multi-tasking “UI enhancements.”

The company said the larger axis and rolled display eliminate discernible creases — something that has plagued devices with foldable AMOLED screens.

Above: TCL: Is it a phone, is it a tablet… no it’s a rollable phablet

TCL also teased a device that adopts an accordion-like concertina form factor. The company has offered a glimpse of this device previously but now appears to have a fully working prototype of the trifold table concept, which it said will “spearhead a new product category.” 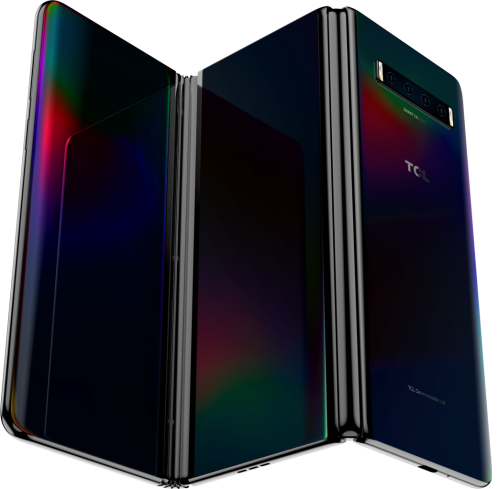 Using TCL’s previously unveiled “DragonHinge” and “ButterflyHinge” technologies, this particular contraption starts as a 10-inch tablet and finishes as a 6.65-inch device, sporting a 20.8:9 aspect ratio and 3K resolution. Above: TCL’s tri-fold device concept begins as a tablet

When folded, the device looks a lot like a really thick smartphone, though it’s not entirely clear TCL will be pitching it that way — given its current shape and size, it’s difficult to see it replacing anyone’s main mobile phone.

Above: TCL’s trifold tablet concept ends up looking like a very think smartphone

Companies are playing around with new form factors to see what works and what appeals to consumers, which is why sliders have reared their heads. But fully flexible displays promise to transform the technological landscape.

China’s Royole has raised north of $1 billion in the past seven years to develop and market flexible screens and sensors. The company has showcased countless use cases for paper-thin AMOLED displays, far beyond smartphones and tablets. Spherical smart speakers enveloped by a wraparound screen? Curved displays plastered to your car’s steering wheel? Visually enticing top hats? Yes, this is a future we could be heading toward.

Above: Royole: A car dashboard with curved flexible displays

Above: Royole: A screen on your hat

As with its rollable slide-out phone, TCL isn’t divulging pricing or availability for its trifold tablet. But the company wants the world to know it’s entering the mobile realm in a big way.

“With these latest concept devices, TCL has clearly shown that there is still plenty of room for new ideas when it comes to flexible and foldable display technologies, and it’s critical for us to think outside the box and lead with innovation,” Lee said.