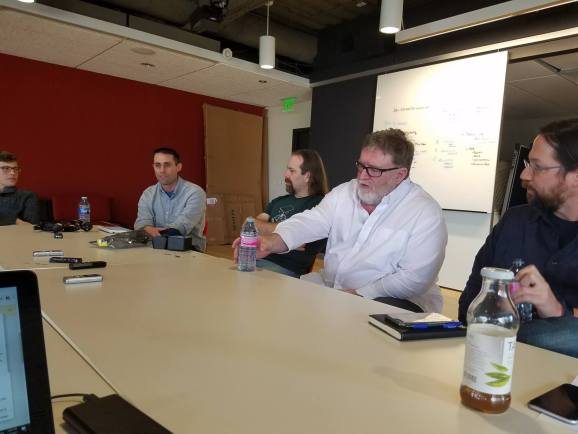 Think we’re far off from The Matrix? Gabe Newell says you should think again.

In a rare interview with IGN ahead of next week’s release of Half-Life: Alyx, Newell reasoned that more advanced forms of VR might not be too far out. “We’re way closer to The Matrix than people realize,” he stated. “It’s not going to be ‘The Matrix’, The Matrix is a movie and it misses all the interesting technical subtleties and just how weird the post-brain-computer interface world is going to be. But it’s going to have a huge impact on the kinds of experiences that we can create for people.”

Newell then got specific with that he means. “I think connecting to people’s motor cortex and visual cortex is going to be way easier than people expected,” he stated. He continued by explaining that some sensations the body controls, like the ability to perceive temperature, are much more complex than “reading and writing somebody’s motor cortex.”

“Whereas things like your motor cortex, your visual cortex are much more tractable problems,” he said. “And what’s what I mean, we’re going to learn a lot as we proceed as to what things work and what things don’t, what things are valuable to people and what things are just party tricks that don’t really matter in the long run.”

Do you think Newell is right? Is Valve working on a secret brain override headset with the best VR ever? We probably won’t find out anytime soon, but what we will see soon is Half-Life: Alyx. Valve’s big return arrives on March 23.