In an effort to keep folks abreast of the spread of the novel coronavirus that causes COVID-19, which has sickened more than 400,000 people, IBM today announced the launch of an incident map on The Weather Channel. It will join the news and information feeds already available on Weather.com and The Weather Channel mobile app, which IBM says has more than 300 million active monthly users.

The incident map of COVID-19 data, which will leverage data from state and local governments as well as the World Health Organization, will join a dashboard built on IBM’s Cognos Analytics suite that is designed to aid researchers, data scientists, and media in the analysis and filtering of regional information down to the county level.

Earlier this month, Microsoft launched a similar map that lets users track the number of COVID-19 cases in countries around the world and in every U.S. state, drawing from databases maintained by the World Health Organization, the European Center for Disease Prevention and Control, and the U.S. Centers for Disease Control and Prevention (CDC). Google is also developing informational tools to provide localized information about the ongoing outbreak. 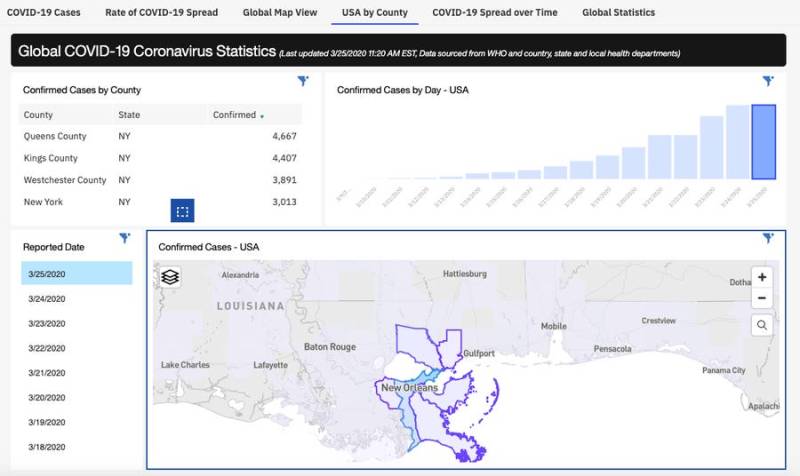 It was recently revealed that Facebook, Google, health experts, and others are in discussions with the U.S. government about how smartphone location data might be used to combat COVID-19, including tracking whether people are keeping one another at safe distances. Public health experts are reportedly interested in the possibility that companies could compile the data in anonymous, aggregated form, which they could use to map the spread of the infection.

“We’re exploring ways that aggregated anonymized location information could help in the fight against COVID-19. One example could be helping health authorities determine the impact of social distancing, similar to the way we show popular restaurant times and traffic patterns in Google Maps,” a Google spokesman told The Washington Post. “[This] would not involve sharing data about any individual’s location, movement, or contacts.”

IBM last week announced it would coordinate an effort to make supercomputing capacity available to researchers in order to help identify treatments, viable mitigation strategies, and vaccines for COVID-19. It also launched a new Call for Code Global Challenge that will encourage developers to build open source technologies that address several areas, including crisis communication during an emergency, ways to improve remote learning, and how to inspire cooperative local communities.

“Together, we have the power to use the latest technology in ways that make an immediate and lasting humanitarian impact in local communities and across the globe,” said IBM. “Thank you for answering the call in this unprecedented time in our history.”