Strivr, the company behind a virtual reality (VR) platform that companies use to train employees, has raised $30 million in a series B round of funding led by Georgian Partners, with participation from Franklin Templeton, Prologis Ventures, GreatPoint Ventures, and Alumni Ventures Group.

Founded in 2015, Palo Alto, California-based Strivr has developed software that enables immersive training in the workforce, meshing VR with learning theory, data science, and spatial design. The core software platform itself constitutes creator tools for making immersive training programs; content and device management tools for managing the deployment across devices in multiple locations; and advanced analytics to provide insights around usage and engagement.

Additionally, Strivr also offers professional services to get companies up and running with its software, including strategy and planning, content production, and on-site hardware configuration and management. Strivr has nabbed some big-name clients over the past few years, including Verizon, BMW, JetBlue, Fidelity, and GE’s FieldCore.

Back in 2017, news emerged that Walmart was teaming up with Strivr to coach managers and executives at its many Academy Training Centers across the U.S. Then a year later, Walmart confirmed it was buying 17,000 Oculus Go VR headsets to train a million employees at its retail outlets, which would enable them to practice loading the Pickup Tower — a new online order pickup option — before it was installed in stores. 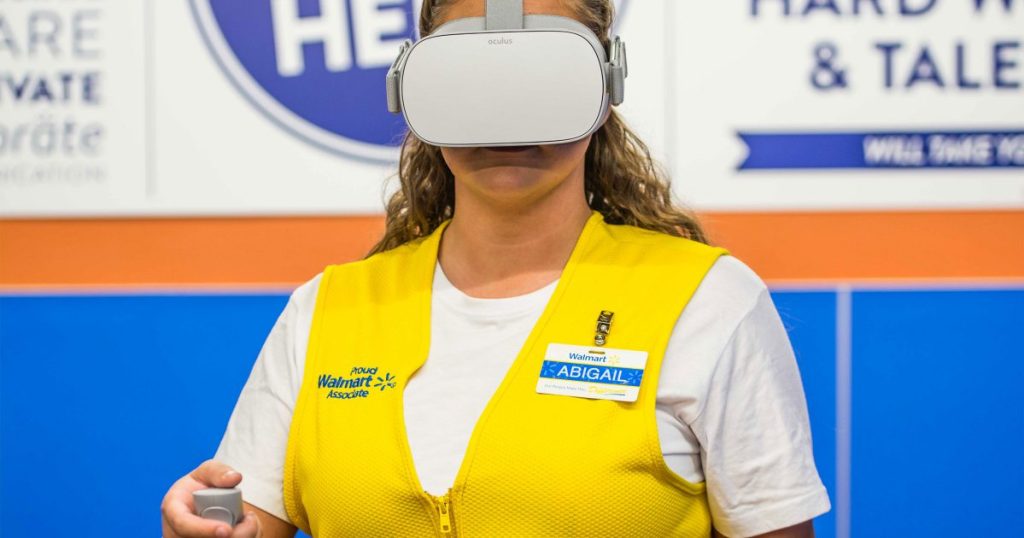 Above: Walmart worker training in VR

Strivr began life as a project inside Stanford University’s Virtual Human Interaction Lab (VHIL), where CEO Derek Belch morphed his master’s thesis into a VR training company focused on sports coaching. Initial clients included major NFL teams such as the New England Patriots, the Dallas Cowboys, the Minnesota Vikings, and the Arizona Cardinals, who leveraged 360-degree video to put players through their paces with less of the physical risks associated with real on-field practice.

Strivr also expanded to other sports, including baseball and ice hockey.

Be the #LAKings goalie with our VR Experience at tonight's game outside of Section 105! pic.twitter.com/DUlNFj4U1a

Fast-forward to 2020, and Strivr is now firmly embedded in the enterprise realm (though it still works with the sports fraternity) and is well positioned to capitalize on what could prove to be a lucrative period for VR and AR startups.

A recent IDC report noted that while AR and VR headset shipments would likely fall in the immediate wake of the COVID-19 outbreak, this is mainly due to supply chain disruptions, and the longer term impact could be more positive. Jitesh Ubrani, research manager for IDC’s mobile device trackers, noted:

Much of the supply chain for AR and VR headsets is shared with smartphones and PCs, and many of these products are facing supply constraints as factories are operating at much lower capacity resulting in component shortages. However, the spread of the virus is having the opposite effect on demand as an increasing number of consumers and employees stay indoors and look to AR and VR solutions for ways to collaborate with colleagues and entertain themselves and their families.

Tom Mainelli, group vice president of consumer and devices research at IDC, added that interest in VR from the enterprise “continues to ramp up as more companies use the technology to drive a wide range of training scenarios.”

Prior to now, Strivr had raised $21 million, and with another $30 million in the bank the company said that it is looking to increase adoption of immersive learning in the workplace. The company also announced that it has been awarded a patent by the U.S. Patent and Trademark Office (USPTO), covering an algorithm that predicts how an employee’s performance in a VR world will translate into the real world. For this, Strivr tracks things like head, hand, and eye movements, in addition to physiological data.