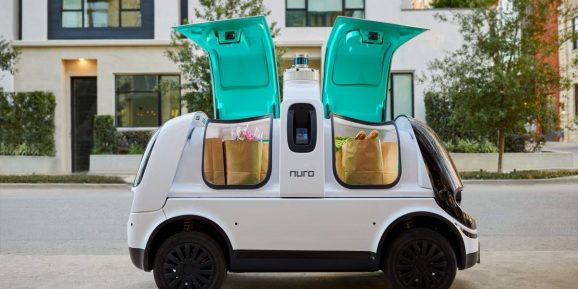 The California Department of Motor Vehicles (DMV) today issued a permit authorizing Nuro to test driverless delivery vehicles on public roads within a portion of the San Francisco Bay Area. This follows the U.S. National Highway Traffic Safety Administration’s (NHTSA) decision in February to grant the company an autonomous vehicle exemption that allowed Nuro to pilot its R2 vehicles on roads without certain equipment required for passenger vehicles. Perhaps more importantly, it comes while driverless vehicles are being considered as a way to ease supply chain strains caused by COVID-19.

While Nuro previously had California state authority to test autonomous vehicles on the road with safety drivers, this new permit from the DMV allows the startup to test two light-duty delivery vehicles without drivers behind the wheel in nine cities in Santa Clara and San Mateo counties:

The vehicles can only travel up to 25 miles per hour and must operate in fair weather conditions on streets with a speed limit of no more than 35 miles per hour, according to the DMV.

“Given current shelter-in-place orders, and our top priority of keeping our own workforce safe, we will be actively engaging in logistical planning for the day public [road] testing can begin,” wrote Nuro chief legal and policy officer David Estrada in a blog post. “Our first plan is to make free deliveries to select customers in Mountain View and the surrounding area. This will allow us to launch a formal delivery service in partnership with local brands and retailers. The next step in the California regulatory process will be to apply for a full statewide commercial deployment permit to bring our services to California residents throughout the state.”

Nuro is the second company to receive a driverless permit in the state after Alphabet’s Waymo. The DMV approved regulations allowing for light-duty autonomous delivery vehicles weighing less than 10,001 pounds on December 16, 2019.

Nuro’s R2, which was designed and assembled in the U.S. in partnership with Michigan-based Roush Enterprises, features a smooth and rounded cabin with contours where side mirrors would otherwise be placed. This is designed to create room for bicyclists and other “vulnerable” road users. The vehicle’s pedestrian-protecting front end absorbs energy and can collapse inward, thanks in part to redesigned doors that provide more headroom and clearer access to the compartments within. And its sensor array enables it to maintain a 360-degree view of the road at all times, using a combination of thermal imaging cameras, RGB cameras, radars, long- and short-range lidar sensors, and ultrasonics.

A large exterior screen lets customers unlock and interact with the vehicle’s various storage compartments, which measure 22.38 cubic feet and have temperature control to keep perishable goods fresh. Under the hood, the R2 has a 31kWh battery, redundant braking and control systems, automotive lighting and signals, and a sound generator for pedestrian safety. This all contributes to its 1150kg (2.5 tons) weight, as do payloads, which can range up to 190kg (418 pounds).

Nuro was cofounded in 2016 by Dave Ferguson and Jiajun Zhu, both veterans of the secretive Google self-driving car project that eventually spun out as Waymo. The Mountain View, California-based company has about 400 employees and 100 contract workers and has so far deployed over 75 delivery vehicles — a mix of self-driving Priuses and R2s.

For the better part of a year, Nuro’s fleet of Prius vehicles in Houston, Texas has been making deliveries to consumers from various partners, including Kroger.

But Nuro has the distinct advantage of significant venture capital backing from Softbank. The Japanese holding conglomerate earlier this year announced it has invested almost $1 billion — $940 million — in Nuro through its Vision Fund, valuing the company at around $2.7 billion.

“Nuro’s founding mission, to accelerate the benefits of robotics for everyday life, has never felt more real to us than it does today,” continued Estrada. “[T]he COVID-19 pandemic has expedited the public need for contactless delivery services. Our R2 fleet is custom-designed to change the very nature of driving, and the movement of goods, by allowing people to remain safely at home while their groceries, medicines, and packages are brought to them.”