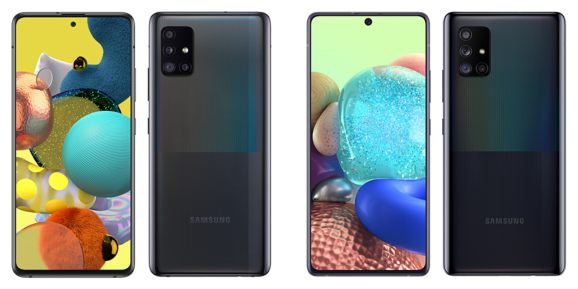 The key selling point of each model is value pricing, rather than raw specs. At a time when Samsung’s S20 series starts at roughly $1,000, the new A51 will sell for half that. This fairly aggressive price point will likely help the South Korean company win over budget-conscious 4G-to-5G upgraders around the world, especially as premium rival Apple continues to sell only 4G models in those price ranges. Offering 5G has already become a major differentiator for devices sold in China and South Korea, with expectations that brands will soon see similar benefits in the U.S. and Europe.

For $600, the Galaxy A71 5G bumps the screen to Super AMOLED Plus and 6.7 inches but preserves the 2400 x 1080 resolution. The main rear camera jumps to 64MP in resolution and f/1.8 aperture, while the same specs from the A51 apply for all the other cameras.

An unspecified octa-core processor with twin 2.2GHz cores and six 1.8GHz cores will power each model. Both devices will pack 4,500mAh batteries with fast charging, though the A51 5G will refuel at up to 15-watt speeds, while the A71 5G will support 25-watt Super Fast Charging. In each case, up to 1TB of microSD expansion will be supported, if you supply the card.

Last year, Samsung launched the Galaxy A90 5G as its most affordable 5G device, starting at under $800 in South Korea but ultimately settling in the $600 range in the United States. Chinese OEMs have been aggressively pushing to drop 5G phone prices in recent months, with companies such as Coolpad promising $400 5G models and Xiaomi cutting the price of its discontinued Mi Mix 3 5G to under $300. That said, these phones typically support only mid band 5G, which is widely available in China and some European countries but not as common in the United States.

Samsung says the A51 5G and A71 5G are coming in summer 2020 but hasn’t provided specifics on which 5G bands they’ll support — at this point, there’s every reason to suspect they’ll work on low and mid bands but not high (millimeter wave) frequencies. These phones and several other non-5G models are promised for global release, but as of press time they haven’t appeared on U.S. carriers’ sites.