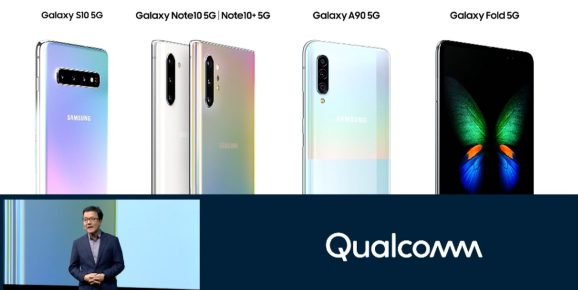 Over the past few months, major 5G milestones have started to get measured in the millions: the first million South Korean 5G customers, and then the first million 5G customers on a single carrier. At IFA today, Samsung added some impressive new numbers to the pile, suggesting that it has already sold 2 million Samsung 5G smartphones and saying it expects the number to exceed 4 million by the end of 2019.

The statistics were announced during Qualcomm president Cristiano Amon’s IFA keynote speech by Dr. JuneHee Lee, Samsung’s head of technology strategy. “Today, more than two million consumers around the world can connect to 5G networks using 5G Samsung smartphones,” Lee said, “and we expect that number to more than double by the end of the year.”

Samsung’s lineup of 5G phones is certainly the most diverse of any major manufacturer, now spanning Galaxy S10 5G, Galaxy Fold 5G, Galaxy Note10 5G, and Galaxy A90 5G models at price points ranging from under $850 to over $2,000. Until this week’s announcement of the A90, all of the phones carried price tags north of $1,000, restricting their availability to only the highest-end smartphone customers. Though the A90’s U.S. pricing hasn’t been announced, it’s expected to be in the range of its €749 (~$826) European price tag, which could dramatically expand Samsung’s market share.

Since Samsung is the world’s largest smartphone vendor, selling somewhere between one-fourth and one-fifth of all smartphones shipped annually, its 2 million and 4 million phone numbers provide some guidance for what industrywide 5G smartphone sales will look like by year’s end — somewhere in the range of 1-3% of total shipments. Leading global rival Apple will not be selling 5G phones this year, while China-based competitor Huawei is expected to have two or more 5G devices on shelves by year’s end, with numerous Chinese, Japanese, and Korean OEMs accounting for the remainder of 5G device sales.