To commemorate Earth Day, Intel — in partnership with Accenture and Sulubaaï Environmental Foundation, a Philippine-based nonprofit dedicated to protecting Palawan’s natural resources — detailed Project Corail, an AI-powered platform that monitors and analyzes the resiliency of coral reefs. Since its launch in May 2019, it’s collected 40,000 images of the reef surrounding Pangatalan Island, which researchers have leveraged to gauge reef health in real time.

If the pilot program in Palawan is successful, Project Corail could be used to monitor more of the world’s at-risk reef population. (Stresses such as pollution, overfishing, and global climate change will kill an estimated 90% of reefs in the next century.) It’s a worthwhile mission considering that reefs not only protect coastlines from tropical storms, but that they provide food and income for 1 billion people, generating $9.6 billion from tourism and recreation alone each year.

Project Corail consists of a buoy equipped with marine-grade solar panels, batteries, and a transmitting device (either Wi-Fi or 4G), as well as a camera attached to the mooring line. An Intel Neural Compute Stick 2 plugged into a Raspberry Pi handles on-buoy computing, while an onshore PC processes images with an Intel Arria 10 FPGA.

Above: A schematic layout out Project Corail.

Deploying the buoy required building a concrete underwater platform — Sulubaaï’s Sulu-Reef Prosthesis — that provides strong support for unstable coral fragments. According to Intel, the Sulu-Reef Prosthesis incorporates fragments of living coral that will grow and expand, providing a habitat for fish and marine life.

Images captured by Project Corail are transmitted from the camera to the PC at regular intervals via an Azure app running on the Pi. A custom-trained machine learning model — a part of Accenture’s Applied Intelligence Video Analytics Services Platform (VASP) — counts and classifies the marine population, and the data funnels from the PC to Microsoft Azure for collation in reporting dashboards. 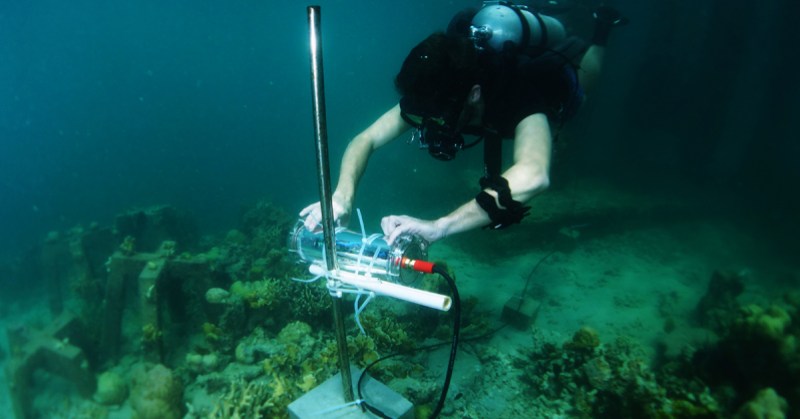 Above: A Project Corail camera module attached to a mooring line.

In the future, the Project Corail team plans to deploy a better-optimized AI classifier model and a backup power supply. They’re also considering infrared cameras, which would allow for night shots, and adapting the platform to study tropical fish migration rate and human intrusions into restricted underwater areas.