In partnership with organizations including the World Resources Institute and the Yale Program on Climate Change, Facebook today released the Climate Conversation Map, a set of maps that tap aggregated, anonymized data to highlight where, when, and how often users share or react to climate change-related links. It’s available by request to research partners and nonprofits following a preview last year, and it now provides new information including data and insights into how conversations ebb and flow over time.

The maps could be used by organizations to visualize the rate of engagement with climate-related news, and by extension to study the impact it might have on global sentiment. Unsurprisingly, studies show that climate change opinion differs throughout the world — according to a report from the European Investment Bank, 80% of Chinese people believe that climate change is irreversible compared with 25% of Italy and Spain.

As with Facebook’s other data-driven maps, the Climate Conversation Map is created with an automated system that pulls the daily volume of total external link shares on Facebook as well as the number of reshares and comments/reactions to the links. The system then flags the subset of links containing the keywords “climate change” or “global warming” across 21 major languages, determined by both population size and the number of active Facebook users. 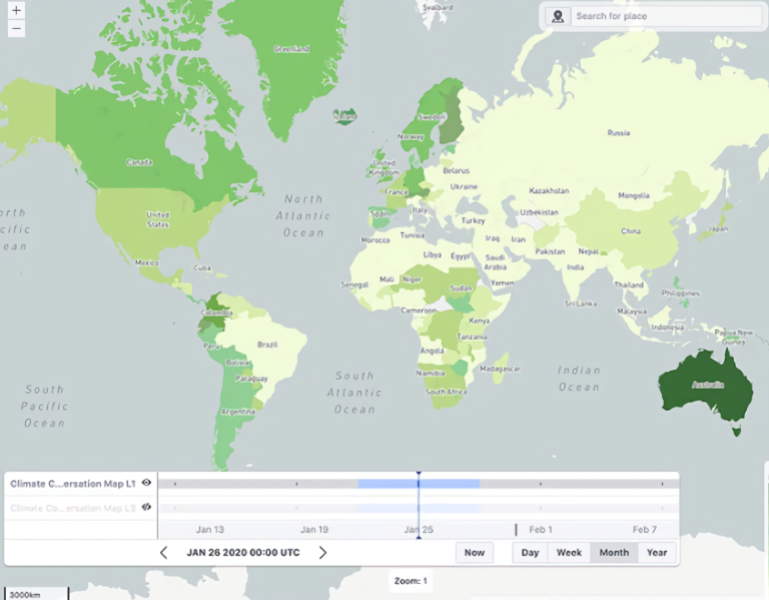 The information is anonymized and collated each week, and in areas where the number of people sharing the links is greater than 10, the system computes the absolute number of links related to climate change and the relative percentage of total links shared. The result is a series of color-coded world maps that update regularly, where green areas indicate climate change conversation hotspots and lighter green indicates less active areas.

“We are excited to share these tools with leading researchers and nonprofits in the climate space,” wrote Facebook in a blog post. “We look forward to seeing how different organizations use these maps to inform the climate debate and deliver new resources.”

Facebook’s work in AI and mapping comes after the social network shared to the OpenStreetMap community the Map With AI tool, which automates several of the most time-consuming steps involving in annotating roads, buildings, and bridges. Additionally, the Menlo Park company recently made available TapiD, RapiD, and an AI-powered version of OpenStreetMap’s editing tool iD, in addition to AI-generated road mappings in Afghanistan, Bangladesh, Indonesia, Mexico, Nigeria, Tanzania, and Uganda.