QuillBot, a startup developing AI tools that intelligently rewrite text, today announced that it raised $4 million in financing. Fresh capital in hand, the cofounders hope to make QuillBot’s platform a one-stop editing shop, with modules that will summarize information from articles and complete paragraphs by synthesizing sentences informed by intent. QuillBot also plans to establish an R&D lab to conduct and publish AI and machine learning work, with an emphasis on natural language processing (NLP).

QuillBot is the brainchild of the University of Illinois (UIUC) dropout Anil Jason and 2017 alums Rohan Gupta and David Silin. Jason and Silin collaborated on a senior thesis project involving a system that, given an article, generated multiple-choice questions about the content of that article. The pair applied to the college’s iVenture accelerator along with Gupta, where they made a breakthrough in paraphrase generation.

QuillBot’s eponymous product rephrases up to whole paragraphs of text, which isn’t on its face novel — services like WordAi, Chimp Rewriter, Grammarly, and indeed Microsoft Word purport to do the same. But the company claims it leverages state-of-the-art techniques that give its platform an advantage where grammatical and syntactical correctness are concerned. For instance, it co-learns with users so that the more people use QuillBot, the better its suggestions and understanding of English becomes. 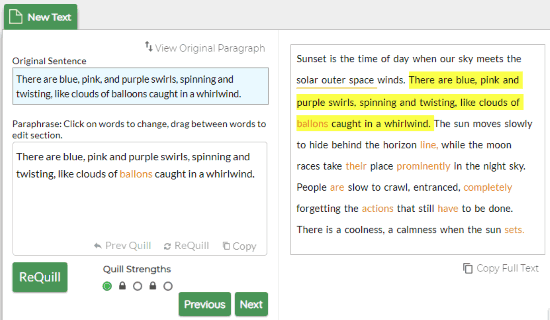 QuillBot is chiefly targeting college students who write extensively in a language that’s not their first, as well as non-native professionals who communicate about complex topics. (The company says that of the roughly a million people who use its tool, 60% are non-native English speakers.) It’s a large market — according to the Ethnologue project, over 740 million people use English as their second language.

The vast majority of people use QuillBot as a grammar checker, fluency enhancer, and muse, according to Jason, as well as a sort of “smart thesaurus.” He acknowledged that it could be used for plagiarism, in theory — which neither he nor the company condones — but said that QuillBot’s engagement data shows it’s not a typical use case.

“We analyze users’ behaviors and patterns to determine this. If users are changing every other word in a sentence, it indicates they are likely plagiarizing,” said Jason. “However, most of our users only lightly edit the output, indicating that they are using this as a legitimate writing aid.” 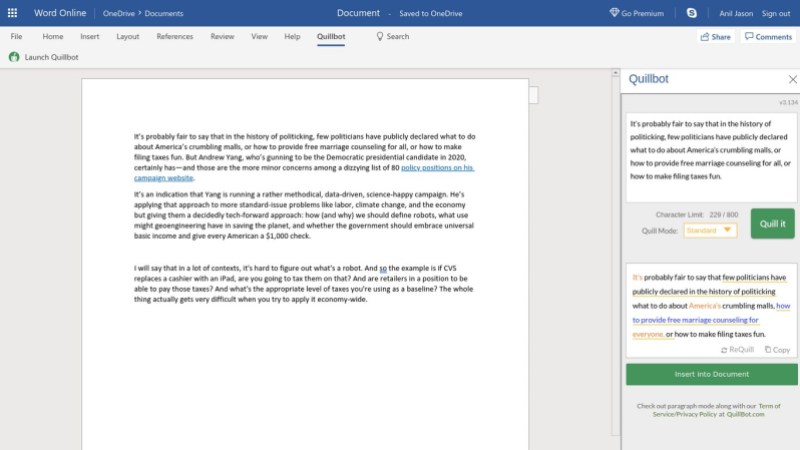 Chicago-based QuillBot — which was bootstrapped until now and which is profitable — makes money by charging for a premium service ($14.95 per month) that unlocks access to Microsoft Word and Google Docs plugins, a Chrome extension, and support for simultaneous processing of up to 10,000 characters and 15 sentences. Additionally, it offers an API that enterprises can use to integrate QuillBot with chatbots, word processors, and other existing platforms.

GSV Ventures and Sierra Ventures led the seed funding round.