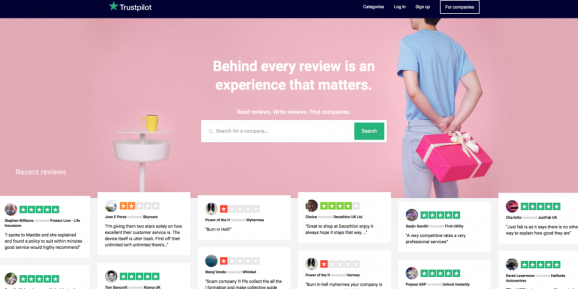 The past decade has seen a sharp drop in trust of institutions such as the government and media. But while people are turning to other people for information, one of the most critical online tools they use for sharing information, online reviews, is also seen as increasingly suspect.

A report by online review site Trustpilot and behavioral analytics firm Canvas8 found that while 90% of U.S. consumers now read some kind of online reviews before purchasing a product, about half of those people believe the reviews were likely being manipulated in some fashion.

The findings come as brands and news organizations are struggling to battle a growing cynicism that has been fed by claims of fake news and misinformation campaigns. The battered reputation of online reviews reflects the growing lack of trust in information found online and could present a critical hurdle to companies seeking to ramp up their ecommerce operations.

“I think one of the things that defines the trust crisis that we live in is the state of online reviews,” said Peter Mühlmann, founder and CEO of Trustpilot. “If I compare today to 10 years ago, people are increasingly realizing the need to trust online institutions. But I think the consumer awareness around the problem with fake reviews is hurting many brands.”

Online reviews have always had a somewhat mixed reputation. Yelp, for instance, helped popularize user reviews of local businesses but at the same time has faced criticism from merchants who sometimes said they felt pressured to pay for services to ensure good ratings. Amazon has also attempted to weed out fake reviews by tracking people’s connections via their social media accounts.

Even as these companies took steps to improve comment quality and reliability, embedding online reviews across just about any ecommerce site became standard. Trustpilot, founded in 2007 and based in Denmark, has raised $198 million in venture capital, including a $55 million round last year. The company has developed a platform that employs a clear set of rules with artificial intelligence to ensure that reviews are transparent and reliable.

Still, the broader world of reviews remains a murky place, which casts a negative light on the whole practice. Part of the problem, according to Mühlmann, is that efforts by companies to manage their online reputations can include strategies that feel devious to customers, and so end up backfiring.

As an example, Mühlmann cited what he refers to as “fake reviews 2.0.” These involve real customers and their real opinions but organized in a way to mislead. For instance, maybe a business invites a customer to share their opinion after immediately purchasing an item but doesn’t give them a way to update that rating a year later if things have gone sour.

Another common tactic is to only invite customers the company believes had a positive experience to leave a comment. Creating expiration dates for bad comments is another tool. And despite efforts by companies such as Amazon to crack down on paid reviews, companies continue to find a way around this through schemes such as hunting down positive reviews on their Facebook pages and then either encouraging or paying those people to review them on other sites to improve their rankings.

In all of these cases, the company risks breaking faith with the customers who left comments, even positive ones, if they feel later they were used to paint an overly rosy pictures. They could also feel their time was wasted.

By the same measure, online reviews have become an essential part of the shopping experience. Simply eliminating them could also raise questions in the minds of potential customers.

“Opinion sharing became something that we really take for granted,” Mühlmann said. “I like to say that today it’s impossible to buy a pizza without having to review the company, the delivery person, and the app. Not being asked about your opinion is considered weird. And not being able to find the customers’ reviews is really frustrating.”

They key in this case is transparency. Mühlmann said being open about rules for who leaves comments and how they are treated is crucial. Of course, that requires companies to accept public criticism, something many are still not accustomed to or comfortable with.

But Mühlmann said such attitudes are not giving customers enough credit. When a company can show it has responded to a sharp critique or a complaint, he says, that often leaves a positive impression with potential customers.

“It’s important that businesses realize in the future that it matters how you are collecting opinions,” he said. “Consumers understand that things go wrong. So the absence of negatives in your comments can seem like a bigger problem. But businesses that turn problems into opportunities will be rewarded. It doesn’t matter what you are buying. You want to see what other people are dissatisfied with, and then decide if you can live with that and how the company reacts.”

With ecommerce purchases getting a boost during coronavirus lockdowns, many consumers are now trying out services such as grocery or meal deliveries for the first time. Many of them will first turn to online reviews, and that is the first place where companies can start to build a sense of confidence among those potential buyers, he said.

“The trust contract in the online society has gotten a whole lot more important,” Mühlmann said. “If there’s not trust, then the transaction can’t take place.”