Arm has announced it will give silicon startups zero-cost access to its most widely used chip designs. The move will spur innovation among chip startups, which face high costs getting chips to market. But it will also help Arm deal with competition from RISC-V, a rival architecture started to counter Arm’s growing power in the chip design business.

Arm Flexible Access for Startups offers no-cost access to the company’s intellectual property portfolio, tools, and training, along with full support for early experimentation, design, and prototype silicon. Arm’s customers typically have to pay license fees or royalties on designs that they use as components in larger chips.

The new program for startups is an extension of Arm’s already-popular Flexible Access program and offers early-stage silicon startups zero-cost access to a huge range of Arm’s leading IP, along with global support and training resources.

Dipti Vachani, senior vice president and general manager of Arm’s automotive and IoT business, said in a statement that enabling innovation is critical in today’s challenging business landscape and that startups with brilliant ideas need the fastest, most trusted route to scale. She added that Arm Flexible Access for Startups offers new silicon entrants a faster, more cost-efficient path to working prototypes, resulting in strengthened investor confidence for future funding. 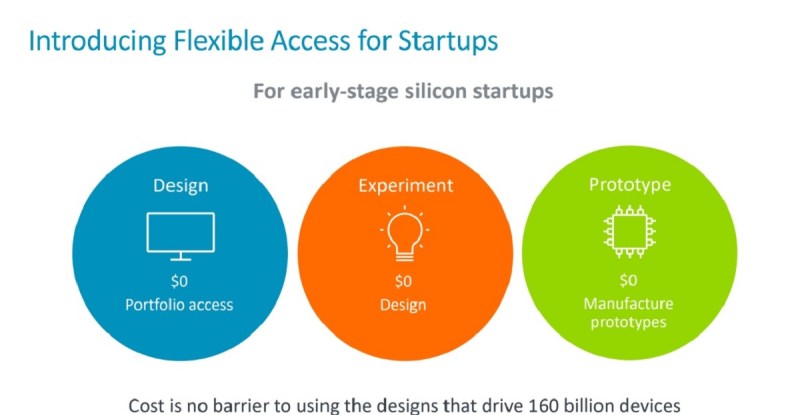 Above: Arm is making its designs more accessible for startups.

Early-stage silicon startups can now access a wide range of Arm IP at no cost, allowing them to experiment, design, and prototype with various Arm solutions throughout the product development cycle. Arm defines “early-stage” startups as those with up to $5 million in funding. Startups meeting these criteria will have access to a broad portfolio of Arm-based processors, including IP from the Arm Cortex-A, -R and -M processor families, select Arm Mali graphics processing units (GPUs), and other chip components. Startups will also be able to supplement their in-house skills and experience with access to Arm’s leading ecosystem of silicon designers, software developers, support, training, and tools.

Emerging use cases in areas such as AI at the edge, autonomous vehicles, and IoT have spurred a new wave of silicon startups, as illustrated by new insights from Semico Research. Report findings show there has been a tenfold increase in funding from 2016 to 2019. In the last five years, silicon startups have received more than $1.3 billion in funding. Semico Research said over a third of startups that have emerged in the past five years are targeting the automotive sector, with another third targeting IoT applications.

Meanwhile, Arm Flexible Access is exceeding expectations, the company said in an email. More than 40 companies are already registered for it, representing sectors ranging from AI-at-the-edge to medical wearables. Chip startups such as Hailo and Atmosic are using the program, which Arm said was created based on customer feedback from those who wanted to get started on their chips as early as possible.