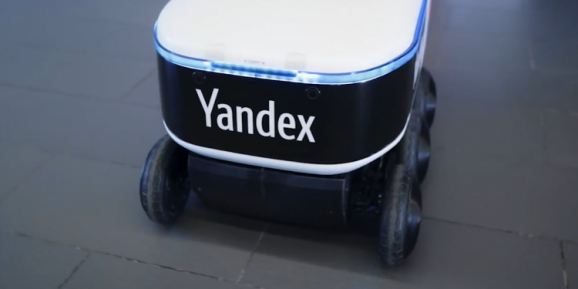 Yandex today announced the first commercial launch of Yandex.Rover, the autonomous delivery robot it revealed late last year, in the city of Skolkovo, Russia. Starting this week, city employees at administrative offices can use the robot for deliveries of documents and small packages.

Skolkovo-based staff will be able to use an app to arrange deliveries by setting a dropoff destination, after which Yandex.Rover will maneuver around obstacles on sidewalks and cross intersections within a radius of “several kilometers.” From this same app, customers can remotely open the robot’s storage compartment and monitor its movement on a map, or connect with a Yandex engineer for assistance.

Yandex says its contract with the city of Skolkovo covers one year of deployment with the opportunity for expansion. It’s starting the program with one robot during normal business hours and intends to grow the fleet from there.

Yandex.Rover’s expansion beyond Yandex’s headquarters in Moscow, where testing began in November, comes as autonomous vehicles are increasingly being tapped for deliveries in regions affected by the coronavirus. Because they’re inherently contactless — customers and delivery workers are exposed to disinfected robots rather than each other — they promise to limit the spread of infection while addressing gaps in on-demand delivery capacity.

The six-wheeled rover, which is roughly the size of a small suitcase, taps some of the tech at the core of Yandex’s self-driving cars to travel safely “at the speed of a pedestrian.” It’s capable of navigating around obstacles in all weather conditions during daylight or darkness, but in the areas where it’s currently deployed — Skolkovo and the Yandex campus in Moscow — Yandex says its activities can be monitored by a remote operator.

The company expects that Yandex.Rover will eventually deliver food as a part of its Yandex.Eats platform, as well as groceries and other essentials from Yandex.Lavka. It might also make its way into the ecommerce platform Beru for order fulfillment and delivery, Yandex says, or into its ecommerce warehouses and datacenters for cargo transport.

“We designed Yandex.Rover to help people automate routine delivery of small packages,” head of Yandex self-driving Dmitry Polishchuk said in a statement. “This is our first experience using the robot outside of the Yandex ecosystem, and we are glad that Rover fits seamlessly into Skolkovo’s workflow. In the future, together with the Skolkovo team, we will consider how else our robot can help optimize tasks in the city.”

Yandex’s likely won’t be the last autonomous vehicles deployment accelerated by the pandemic. The Mayo Clinic branch in Florida recently began using Navya shuttles to transport COVID-19 tests from a testing site to a processing laboratory on the hospital’s campus. In China, startup Neolix says its vans have delivered medical supplies and supplemented labor shortages in areas hit hardest by COVID-19, as well as delivering food to health workers in Beijing who are caring for patients. And earlier this month, Pony.ai partnered with ecommerce platform Yamibuy to launch an autonomous delivery service for customers in Irvine, California.