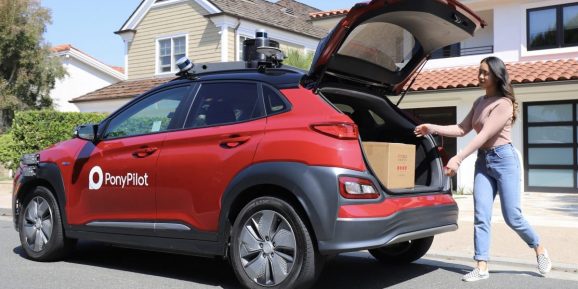 Driverless startup Pony.ai this afternoon announced that it’s collaborating with Yamibuy, an ecommerce platform based in Los Angeles, to launch an autonomous delivery service for customers in Irvine, California. Beginning today and extending through mid-summer, Pony.ai will use its autonomous fleet of retrofitted Hyundai Konas to deliver packages and groceries from Yamibuy to its customers’ doorsteps.

Pony.ai says it will load orders 10 to 20 at a time into its robo-taxis, using the car’s safety driver as a delivery person. Each vehicle is expected to carry about 100 orders a day.

Commercially, the partnership marks a milestone for Pony.ai: It’s the first time the Fremont-based firm has deployed its vehicles for goods delivery. It follows in the footsteps of rival Nuro, which recently obtained a DMV permit to test driverless delivery vehicles in the San Francisco Bay Area. Pony.ai could provide additional capacity to address the surge in online orders resulting from the COVID-19 pandemic, as well as reducing the risk of infection in the course of deliveries.

Autonomous vehicles are increasingly being tapped to deliver supplies in regions affected by COVID-19. Earlier this month, the Mayo Clinic branch in Florida began using Navya shuttles to transport COVID-19 tests from a testing site to a processing laboratory on the hospital’s campus. In China, startup Neolix says its vans have delivered medical supplies and supplemented labor shortages in areas hit hardest by COVID-19, as well as delivering food to health workers in Beijing who are caring for patients. Elsewhere, KiwiBot’s autonomous delivery robots are delivering sanitary supplies, masks, antibacterial gels, and hygiene products in the communities of Berkeley, California and Denver, Colorado.

Former Baidu chief architect James Peng cofounded Pony.ai in 2016 with Tiancheng Lou, who worked at Google X’s autonomous car project before it was spun off into Waymo. The pair aims to build level 4 autonomous cars — able to operate without human oversight under select conditions, as defined by the Society of Automotive Engineers — for “predictable” environments, such as industrial parks, college campuses, and small towns, with a tentative deployment window of several years from now.

Pony’s full-stack hardware platform, PonyAlpha, leverages lidars, radars, and cameras to keep tabs on obstacles within up to 200 meters of its self-driving cars. It serves as the foundation for the company’s fully autonomous trucks and freight delivery solution, which commenced testing in April 2019 and is deployed in test cars within the city limits of Fremont, California and Beijing, China (in addition to Guangzhou).

Pony.ai is one of the few companies to have secured an autonomous vehicle testing license in Beijing. In California, it has obtained a robo-taxi operations permit from the California Public Utilities Commission. Only three other companies have such a license in California: AutoX, Waymo, and Zoox.

Last October, Pony.ai partnered with Via and Hyundai to launch BotRide, Pony.ai’s second public robo-taxi service — after a pilot program (PonyPilot) in Nansha, China. BotRide allowed riders and carpoolers to hail autonomous Hyundai Kona electric SUVs through apps developed with Via, sourcing from a fleet of 10 cars with human safety drivers behind the wheel.

Pony.ai decided to suspend its public PonyPilot service for three weeks starting March 16 due to the pandemic, along with its autonomous vehicle commuter pilot for the Fremont, California local government.