LinkedIn today announced a new AI-powered feedback tool for people practicing answers to job interview questions. The Microsoft-owned company claims that in early tests, it resulted in a “significant increase” in LinkedIn members rehearsing their answers.

The tool taps into technology Microsoft developed for Presenter Coach, a PowerPoint feature designed to provide guidance with respect to pacing, tone, and attention, and it could be of use to the more than 50% of people who say they lack confidence during interviews. Candidates have reason to be nervous — content agency Come Recommended reports that 33% of interviewers claim they know if they’ll hire someone within the first 90 seconds.

With the new AI practice feature, once LinkedIn members record and upload their answers, they get a detailed assessment of their answer delivery within seconds. This includes a report with metrics like filler words used and their frequency, words per minute, and speed over time, as well as feedback on cadence, profanity, and phrases that might be considered culturally insensitive. 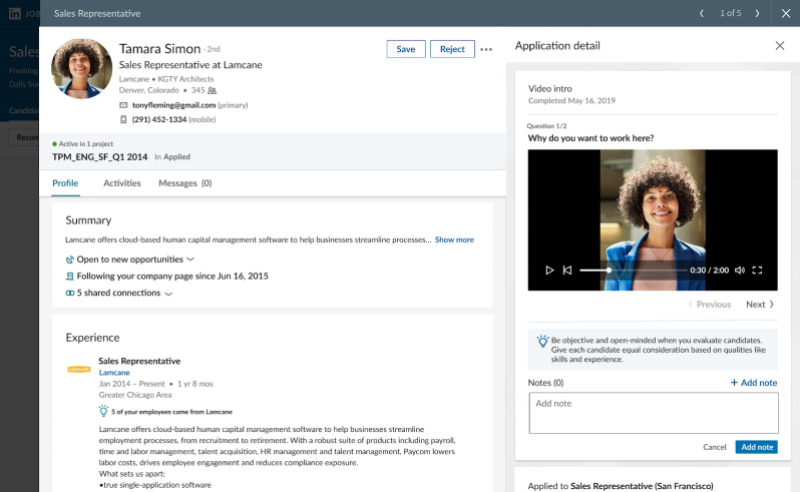 For instance, the LinkedIn tool detects the pace of speech and recommends changes that might help interviewees better understand facts and figures. If a user inserts a disfluency like “um,” “ah,” “like,” “actually,” or “basically” or makes a potentially gender-charged reference like “you guys” or “the best man for the job,” it will recommend alternatives.

“This [new tool] provides an interactive way to practice answers to the most common interview questions in private,” wrote LinkedIn senior director of product Blake Barnes in a blog post. “Interview prep also gives you the ability to request personal feedback on your practice responses from your connections.”

LinkedIn today also launched a feature in preview called video introductions, which allows employers to request that candidates submit recordings or written snippets as a part of the hiring process. The aim is to enable hiring managers to assess a would-be employee’s communication skills prior to the first live interview; LinkedIn says that 92% of talent professionals consider soft skills (e.g., people and social skills) equally or more important for hire than hard skills (teachable and measurable abilities).

With video introductions, recruiters can invite the most qualified candidates to answer up to two questions from a list of options including “Tell me about yourself,” “What is your greatest strength?,” and “Describe your most challenging project.” Candidates can choose to submit their answers via a short video recording or a written response. 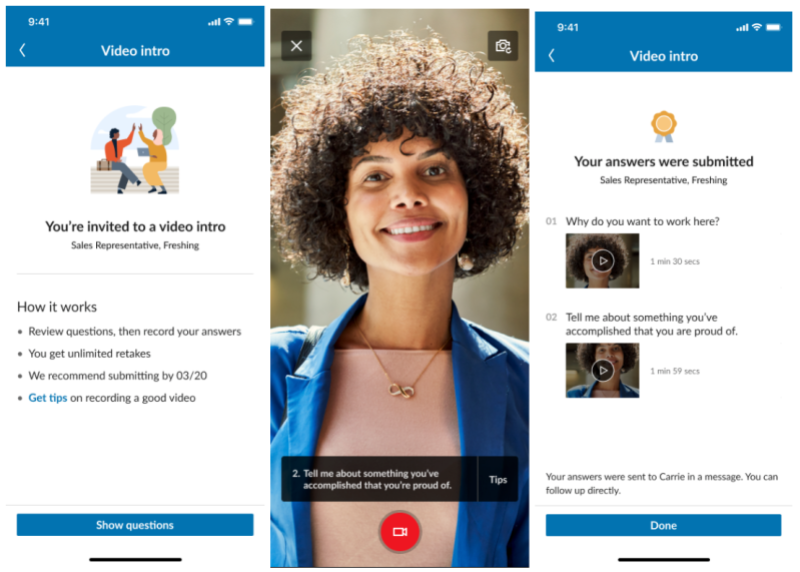 “It can be hard to know if a candidate is the right fit for a role simply by reviewing a resume, and it can be even harder to get a feel for who might be right for a position when you are sorting through hundreds of candidate profiles, And, in today’s virtual environment where the majority of the interview process has moved online, streamlining the hiring process to help fill critical roles quickly is essential,” wrote LinkedIn in a press release. “In early testing, we found this feature to be helpful in hiring for roles in which soft skills are of great importance, like sales and business development.”

LinkedIn says it’ll test video introductions in a “rolling process” with global customers using LinkedIn’s New Recruiter and Jobs products. Those participating will be able to add video intro requirements to new and existing job listings either from the last page of the posting process or from the Project Settings page in the New Recruiting & Jobs dashboard. When looking through their applicant list, they’ll see an Invite to Video Intro option under the overflow action menu, which will prompt them to set up a video intro.