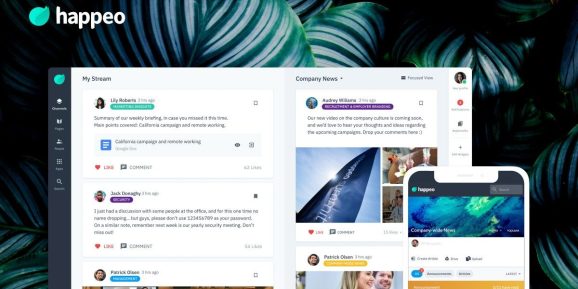 Happeo has raised $12 million in venture capital as the Amsterdam-based company prepares to accelerate development and marketing of its employee communications platform. Inkef Capital led the round of funding, which also included participation from previous investors, including DN Capital, Maki.vc, and Vendep Capital. The funding comes just a week after competitor Workvivo raised $16 million.

These investments are the latest sign that reinventing employee communication and engagement are increasingly critical topics for companies, particularly those with large and distributed workforces. Companies like Happeo believe the traditional intranet can be transformed into the centerpiece of a company’s culture-building efforts with the right design and tools.

“We felt that intranets were typically made only from the point of view of the administrators,” Happeo CEO and cofounder Perttu Ojansuu said. “That means they weren’t as easy to use as they should be.”

Happeo faces a fiercely competitive space. Giants like Google, Microsoft, and Facebook have all developed suites of enterprise tools designed to encourage collaboration and communication. Then there are startups such as Front, which makes an email collaboration platform; Slite, which has created a document collaboration service; and LumApps, which has its own social intranet platform. Staffbase is also taking on the evolving intranet space.

Despite this frenzy, Ojansuu said Happeo still sees an opening because the fundamental problem remains the same. While companies have been using intranets for years to distribute internal communications and offer a hub of resources, they are often little used by employees.

Happeo offers an interface that resembles a social network that also pulls in documents from Google Drive accounts. In addition to integrating with G Suite, Happeo connects to Slack.

Ojansuu said the friendly interface and the selection of tools makes the experience more engaging for employees. The company notes that average daily messages sent on its platform has increased from 500,000 to 2.5 million during the first quarter of 2020.

Happeo originally sprang from another company, Gapps, that is based in Finland and focuses on helping companies manage their G Suite tools. While building Gapps over the past decade, Ojansuu said his team continually heard complaints about internal communications and intranets. That eventually led them to create a tool to address the issues, and then spin it out into a separate company after the product gained traction.

With the latest round, Ojansuu said Happeo will continue to expand product features while also growing its team, particularly for sales and marketing.