Register Now
This article is part of a VB special issue. Read the full series: Automation and jobs in the new normal.

In the two-plus months of global lockdown, much of the digital debate has focused on the pandemic’s long-term impact on the global workforce. Remote working has suddenly become the norm for millions of people, and companies like Twitter have already confirmed that employees will be able to continue working remotely indefinitely.

Whether this trend proliferates remains to be seen, but not all industries lend themselves to working from home. Among many other hands-on sectors, builders, electricians, and plumbers can’t very well ply their trades over Zoom. But digital technology could still play a pivotal part in getting the $11 trillion construction industry back on its feet.

The construction industry has never been renowned for efficiency — various reports indicate it is among the lowest-performing sectors in terms of productivity, due in part to the lack of digitization. This has led to a boom in investments aimed at bringing building sites into the digital era through robotics, AI, and other automated tools. Now the COVID-19 crisis could accelerate that shift.

OpenSpace uses artificial intelligence (AI) to automatically create navigable 360-degree photos of construction sites. The San Francisco-based company’s software works in tandem with a 360-degree camera, which builders and site managers can strap to their hard hats to document the evolution of a site. OpenSpace captures all the imagery and uploads it to the cloud before tapping computer vision and machine intelligence to organize the photos, stitch them together, and map them to project plans.

These visuals allow all stakeholders to monitor progress remotely through virtual site tours, and the digital record can also be used to resolve conflicts at a later date or help managers track multiple projects without being physically present. Ultimately, such technology can reduce the number of people who need to be on-site at a given time.

Above: OpenSpace: Comparing how a construction job has progressed

In the immediate aftermath of the global lockdown, OpenSpace reported a sharp spike in usage, including a 400% rise in “field notes,” which are basically remote comments on a project image. The company also said it saw a 65% increase in the number of web-based viewing sessions and a 37% uptick in the number of on-site photo captures.

OpenSpace also fast-tracked the launch of a new free version of its service called OpenSpace Photo — a basic “manual” offering aimed at smaller projects or subcontractors who only want to focus on a specific area of a build, such as a window installation.

While the two versions of the OpenSpace platform target slightly different use cases, they are both designed to help construction sites operate with fewer people present.

“With either version, you’re getting a purpose-built tool that makes it easier to collaborate with people virtually to monitor site status, make decisions about changes, and communicate any issues,” OpenSpace CEO and cofounder Jeevan Kalanithi told VentureBeat. “We’ve been planning the launch of OpenSpace Photo as a free service for some time now because we believe that photo-documentation is the future of the construction industry. We believe that any tool that can help builders continue their essential work while respecting distancing guidelines is useful, and we wanted to do our part for the industry.”

The builders themselves still have to be physically present, but tools like OpenSpace make it easier for construction sites to respect social distancing measures by streamlining on-site teams. As a byproduct of this shift, construction companies are being forced to try new tools, which could lead to permanent changes in the way they operate.

“We are definitely seeing that the current situation is accelerating the transition to remote working, as more companies find themselves suddenly reliant on remote workers to keep progress moving forward,” Kalanithi added. “Construction is not by any means a tech-averse industry, but because margins can be slim, many businesses like to see real ROI (return on investment) before investing in a new product. We think that the pandemic situation has made remote work a necessity and will accelerate the adoption of enabling technologies because the ROI is no longer a few extra percentage points of profit, but rather potentially the viability of the entire project.” Disperse is also creating new tools and services to help the construction industry get back to work safely, including building integrations with Microsoft Teams and Slack. Perhaps more interestingly, the company is reappropriating some of its existing AI technology to help site managers figure out what tasks can be safely carried out while adhering to social distancing guidelines.

Disperse previously used computer vision to blur workers’ faces when capturing imagery — to protect their privacy — but the company realized that historical face-blurring data could be used to measure physical distancing on building sites and map the data to specific tasks. This means construction companies can gauge how many people are typically required to do a particular job and how close those workers usually are to each other.

“We’re now offering this functionality to our customers to help them understand things like which critical tasks are inherently safe because they can be performed by one person at a time; which tasks will always require more than one worker and should therefore require extra PPE (personal protective equipment) if [they’re] to continue; and which sort of high-risk, non-critical activities [we have] observed that can be eliminated or delayed altogether,” Disperse CEO Felix Neufeld said. “It’s not a ‘real-time’ solution that keeps tabs on workers at all times, but rather a new way to get an understanding of which tasks are still possible to do safely, and which tasks need to be reconfigured or resequenced.”

In the wake of the COVID-19 crisis, Disperse noted a sharp rise in demand for its platform, reporting a 50% increase in “new project engagements.” Neufeld thinks — or perhaps hopes — that COVID-19 will expedite the construction industry’s embrace of digital technologies permanently.

“The signs are everywhere,” he said. “Any solution that can ease the pains of a newly distributed workforce will be positioned to help right now. At Disperse, we’re experiencing an uptick in demand from contractors and developers who want to quickly understand how this crisis is impacting production and how to safely maintain a baseline of productivity where possible.”

The status of the construction industry during the pandemic has varied wildly from country to county and state to state. In some regions, building work ground to a complete halt, while operations in other areas have been largely unaffected. It’s true the construction industry will never be able to go 100% remote, but the sector carries inherently fewer risks than many other industries that require workers to be physically present. For starters, many construction projects are located in large open spaces — whether indoors or outdoors — and safety guidelines around ventilation and PPE are often already in place. In this context, digital tools may simply serve as the “grease” to get some projects going again.

“The new imperative of social distancing is challenging, and there’s no one ‘silver bullet’ that can solve it at once, but the situation is not insurmountable,” Neufeld added. “We’re working with our customers to make sure that anyone who can work remotely will at least have virtual access to a project, and to provide objective data that informs about which tasks can be done with fewer people in a physical space. [Having] fewer people on a site makes everybody safer, and to get there we’ve got to reconfigure processes and work smarter.”

Procore, the California-based construction management software company that is reportedly shelving its IPO plans to raise more private funds, has also launched a bunch of video conferencing tool integrations over the past couple of months, including one with Zoom that was followed by tie-ups with Microsoft Teams and GoToMeeting last week. 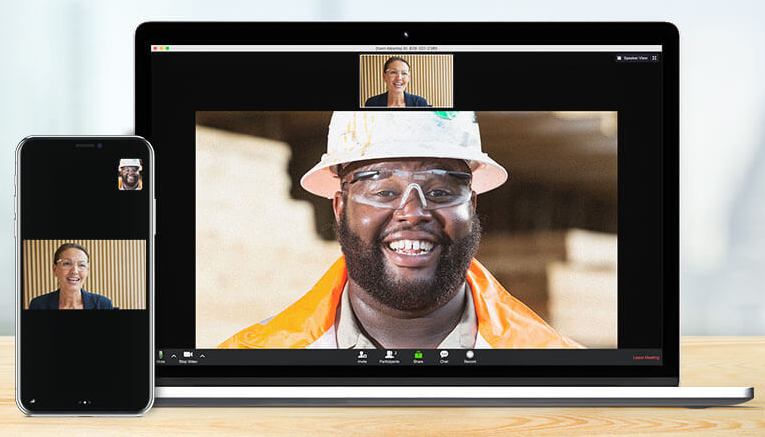 Above: Procore and Zoom

And while architects, project managers, and engineers can use this integration to communicate remotely, it’s aimed at all stakeholders in the construction process — including on-site workers.

“During the early stages of lockdown, customers wanted access to video conferencing tools to help support collaboration between home workers and on-site personnel, which we worked quickly to introduce to the platform,” said Brandon Oliveri-O’Connor, head of Procore in the U.K. and Ireland. “It’s not just about joining group calls to stay connected … construction workers on the ground have been using Zoom to show off-site personnel aspects of the construction site in real time, whether it’s to report a wall with a crack or to query something they’re not sure about.”

New features built or accelerated to accommodate COVID-19 are only part of the story here. Most of these digital platforms have been designed from the get-go to help people collaborate without being in the same space. As construction sites gradually resume operations, logging a fault by uploading a photo to the cloud and then assigning the relevant contractor to fix it at a later time makes good sense all around.

The global economy has already taken a thrashing over the past few months, and we will likely have to learn to live with COVID-19 rather than hunkering down in permanent lockdown. The world still needs new buildings, and people need to work — so construction technology may now have a real chance to shine.

“Builders need to build now more than ever — we need more hospitals, more housing, and more care facilities,” Kalanithi added. “And we need the builders to stay healthy.”

This article is part of a VB special issue. Read the full series: Automation and jobs in the new normal.