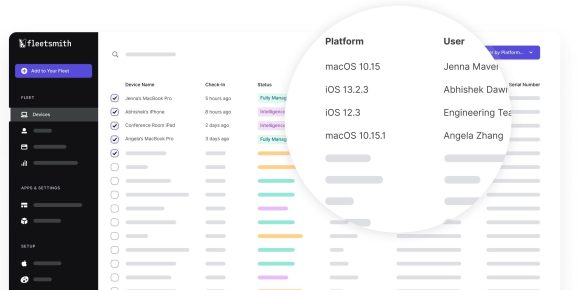 As Apple’s generic acquisition confirmation goes, the company routinely acquires smaller technology companies without necessarily disclosing the details or purpose, but there’s a pretty clear reason behind its purchase today of Fleetsmith. The latter company specializes in streamlined tools to simultaneously deploy and manage multiple Apple devices, including remote automated OS and app updating, so Apple will gain the software and team to help enterprises adopt its new hardware at scale.

Fleetsmith confirmed the acquisition today in a blog post, saying that the deal will enable it to bring its eponymous system to “businesses and institutions of all sizes, around the world.” Unlike many of Apple’s acquisitions, where the deal results in an immediate or near-immediate shutdown of an existing service, Fleetsmith says that it’s looking forward to continuing to deliver its offering to both existing and new customers.

Apple’s tech company purchases are often designed to bring an important capability to the company at an attractive price. Jamf, arguably the best known provider of mass-device deployment and management tools for Apple platforms, is reportedly in the process of going public, seeking a $3 billion valuation. While Fleetsmith originally targeted smaller customers than Jamf’s, its software has an attractively streamlined interface that likely appealed to the design-conscious Apple, and could be scaled with Apple’s help to a much larger group of businesses. Neither company has confirmed Fleetsmith’s acquisition price, but it was certainly less expensive than buying Jamf.

It remains to be seen whether the Fleetsmith acquisition will cut Jamf out of the loop in Apple device management. The options will likely continue to coexist until and unless Apple determines that it would rather control the entire enterprise-scale device management experience for users, at which point its own solution could — following historical precedent — add additional features that are either fully or temporarily Fleetsmith-exclusive, giving its platform an edge with businesses.