Cybersecurity startup Cynet today announced it has closed an $18 million funding round. It plans to use the investment to expand its presence in the U.S. and international markets, specifically on the sales side as it seeks to increase brand awareness and bolster its channel ecosystem.

With the average cost of a data breach this year expected to exceed $150 million (according to Juniper Research), it’s no wonder the cybersecurity market is anticipated to be worth $281.74 billion by 2027. New York-based Cynet is ready with a protection platform that consolidates and automates monitoring, control, attack prevention, detection, and response orchestration across environments.

The five-year-old company’s Cynet 360 platform — which auto-installs on physical and virtual endpoints within a day — collects signals from the network (e.g., logged-on users, failed logins, password changes, software downloads, and executed files) and fuses them to reveal the context of each activity and enforce admin-defined protection policies. At the same time, it enables operators to automate common tasks, like tracking file integrity; exporting management reports; and analyzing activity logs generated by users, hosts, software processes, domains, sockets, and files.

On the anti-malware side, Cynet 360 prevents the execution of malicious code by enforcing a chain of interlocking protection layers on running files and processes. Leveraging machine learning and over 30 live feeds of indicators of compromise, the platform pinpoints attributes and behaviors that indicate malicious activity might be taking place, identifying files similar to known malware. It compares anomalous or unfamiliar programs with baselines generated from logged-in hosts, login frequency, location, internal and external network communication, and other factors while searching for signs of account compromise (like first-time logins, logins outside of working hours, and logins through VPNs). 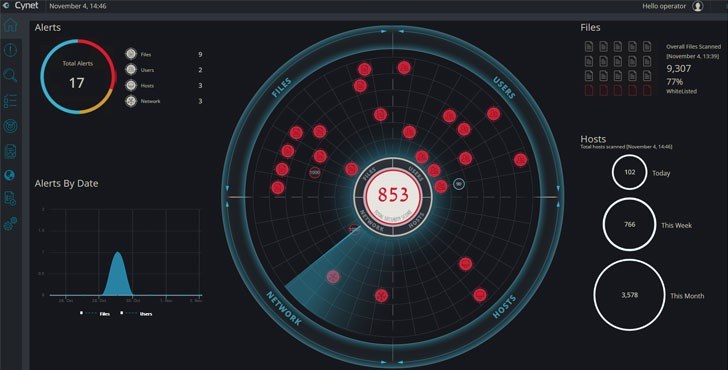 Using Cynet 360, IT teams can define access policies for each user and group. Cynet sends a verification message to those users via phone or email to cut down on false positives, but if it detects a high likelihood of account compromise, it can disable the impacted account automatically.

Cynet 360 also tries to ensure legitimate processes gain access to critical areas in memory, and it can perform remediation — either directly on an endpoint or through infrastructural components like firewalls. Meanwhile, the platform’s deception technology can plant various types of decoys and honeypots to tempt attackers. Real-time alerts are triggered by anything from login attempts with false passwords to trojan malware running on hosts, man-in-the-middle attacks, and hosts initiating suspicious traffic to external addresses.

The company also provides a number of complementary services, including managed detection and response. Customers can send suspicious files for analysis and receive guidance about which endpoints, files, users, and network traffic should be remediated. Or they can retain a Cynet 360 team member to dive into validated attack vectors to gain a better understanding of their scope and impact.

Cynet claims to have “hundreds” of customers worldwide, ranging from small businesses to large enterprises like Deutsche Telekom (who’s also a strategic backer). BlueRed Partners led the series B+ that closed this week, with participation from new investor Merlin International and existing backers Norwest Venture Partners and Ibex Investors.

Competition in the cybersecurity segment is fiercer than ever. Players include Dtex, IntSights, TrapX Security, CybelAngel, and Deep Instinct, all of which take an algorithmic approach to threat detection. That’s not to mention San Francisco-based ZecOps, which recently nabbed $10.2 million for tech that automates analysis and response to cyberattacks. Then there’s Trinity Cyber, whose threat-combating suite combines detection with “adversary inference,” and Huntress, which brought in $18 million to detect and remediate cyberthreats. Not be outdone, Lacework protects cloud environments from data breaches.