Our flagship program is RAPIDS. Here’s how it works: In Fall 2020, students will be placed in virtual cohorts of 20-25 students based on computing proficiency. These students take Nvidia’s Fundamentals of Accelerated Data Science. The course is given as a three semester-credit course. (Our first cohort went through the program last year, but they were taught by White male instructors. 2020 is our first cohort with Black women instructors.)

We are uniquely using culturally responsive instruction; that’s “a pedagogy that empowers students intellectually, socially, and emotionally.” This allows us to incorporate Breonna Taylor into a class on Logistic Regression.

The goal is not for students to just complete the class; they commit to becoming certified to teach it (and other courses in the NVIDIA Deep Learning Institute curriculum). So we can offer training to the federal government, or provide diverse on-site employee development training, or training for other potential customers. Our students can also move on to fill data-science/AI related roles, as interns or employees, giving companies access to a new talent pool.

I’ve been doing substantial outreach for the program across the tech and business community in an effort create job-pipeline partnerships for our alumni and to obtain funding for our teachers so that we can keep tuition free for students. (The plan is to become self-funding via subcontracting opportunities with these companies.) But I’m having a hard time being heard.

Google announced its “Google for Startups Accelerator: Black Founders” this month as part of its commitment to racial equity. It’s a three-month digital accelerator program for high potential Seed to Series A tech startups based in the U.S. “The accelerator program is designed to bring the best of Google’s programs, products, people, and technology to Black founder communities across the U.S. In addition to mentorship and technical project support.” I also found the company’s initiative “Google for Startups Accelerator for Women Founders.” I thought I had access to two perfect opportunities! They both are interested in startups that leverage AI/ML technology in their product. Unfortunately, they both require companies to have a minimum of 10 employees. I have a team of three. (As entrepreneur James Norman recently explained, most Black entrepreneurs don’t match the expected pattern of having several technical cofounders they’ve known for years and so frequently miss out on accelerator opportunities.)

I attended Spelman College. Spelman, Howard, and Hampton College (HBCUs) are not producing more than 10 Black CS/Math/or Stats graduates a year (according to 2015 figures) and certainly do not produce 10 Black women in computing in a given year (let’s not add in what happens to those numbers when we see the full impact of Covid on HBCUs).

The purpose of founding AI4US was so that I — and all the women who go through our training program — can name 10 Black women, descendants of the brutal institution of chattel slavery, working in AI. I am a powerful, promising Black woman entrepreneur. Yet I am locked out of the very opportunities created to advance racial equity for Black communities.

In 2018, Melinda Gates partnered with McKinsey to collect data directly from tech companies to understand their philanthropic and CSR initiatives. The 32 tech companies collectively spent more than $500 million on philanthropic giving in 2017, but only around 5% of that went toward programs aimed at correcting the gender imbalance. Less than 0.1% of philanthropic investing —  $335,000 — was directed at removing barriers hindering women of color from pursuing careers in tech.

What does that $335,000 represent? It includes both programs that are exclusive to women of color, as well as programs open to a larger group of students that makes a deliberate and successful effort to attract and serve women of color.

Struggling to be heard

Since the death of George Floyd unleashed protests across the United States, tech executives have been speaking out forcefully against racial violence in the U.S., with some promising millions of dollars in contributions to organizations pursuing justice. Facebook CEO Mark Zuckerberg announced that the company will contribute $10 million to “groups working on racial justice,” and told followers that he’s working with advisers and employees to find organizations that “could most effectively use this right now.”

I have sent hundreds of letters. 99% were ignored. All of these companies have positions for data scientists and machine learning engineers. And most have few (if any) Black women occupying these roles. I kept reading that corporate America had pledged over a billion dollars for Justice. Not only have I not been able to tap into the less than 0.1% of 2017 philanthropic spending, I can barely get a meeting.

When I contacted the Chief Diversity and Inclusion officer at Intel, who was included in the Gates/McKinsey report, I was ignored. I secured a meeting with Intel only after contacting the CEO! This was also the case with Bank of America. The CEO of Bank of America read my letter and connected me with the right people! I have not yet created a partnership with BofA, but I am hopeful. I have also been able to obtain one, hour-long meeting with a tech firm, but that was because I had already volunteered my services to the company for free.

I am discouraged. But I will persist. My resilience comes from the spirit of my ancestors.

Hagar Murrell founded Garnett Training School around the year 1900 in Pollocksville, North Carolina. At the time, there were four schools for White students, but no school for Black students. So, Hagar stepped up and stepped in! 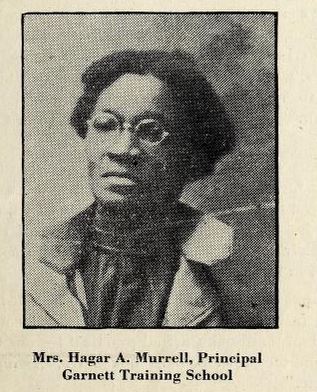 Black students were educated there until integration allowed students to attend the White school in 1968. My letters to the CEO of Intel — my letter to you — are inspired by Hagar’s letters and legacy.

She probably raised at least half a million dollars by today’s standards. You can find her funding requests in newspapers across the country. I have found articles from Texas to New York, from 1888 to 1928 in which she attempted to raise money for teachers and dorms.

Her story is one of a woman, born into slavery, but who is STILL freeing generations of students. One of them is me, Andrea Roberson, descendant of Garnett students and teachers, who became the first Black woman to receive a PhD in Applied Math from Stony Brook University. Me writing this today bears witness to the truth that her program worked. The success of AI4US is encoded in my DNA.

If tech companies give me a chance, a meeting, a portion of that less than 0.1%, imagine what we could do together. How many students can we free to realize their wildest dreams?

Will you respond? I struggle with the anxiety of being ignored, unheard and unseen. Invisible. But Grandma Hagar already broke ground for me, and I will persevere to break ground for other Black women.

Andrea Roberson is CEO of AI4US. She was previously a Machine Learning Researcher in the Economic Statistical Methods Division (ESMD) of the U.S. Census Bureau for over a decade.  Her work includes a variety of design strategies to build and operationalize predictive text analytics solutions. She has authored papers and presentations for conferences including the Association for Computational Linguistics (ACL), the Symposium on Data Science & Statistics (SDSS), New Techniques and Technologies for Statistics (NTTS), and FCSM.