Google today announced that Chrome for Android’s context menu will show “Fast page” labels for webpages deemed to have good performance. The label will be determined using Google’s Web Vitals, an initiative the company announced in May to provide web developers and website owners with a unified set of metrics for building websites with user experience and performance in mind. Core Web Vitals, Google’s attempt to spell out the metrics it considers critical for all web experiences, measure a webpage’s responsiveness and visual stability.

Also in May, Google shared plans to make a webpage’s experience a ranking factor in Google Search overall and in the Top Stories feature on mobile. Google has promised not to make the ranking change this year and to give six months’ notice before it does, but wouldn’t commit to specific timing due to general unpredictability thanks to the coronavirus. If you improve your webpage metrics though, Google is happy to label your links as “fast” in Chrome. In other words, Google doesn’t want to use sticks during the pandemic, but carrots are perfectly fine.

Born online, Google’s revenues are directly tied to the web. The company has a vested interest in improving the web’s user experience. Given Google’s reach, including over 1 billion Chrome users and over 2.5 billion monthly active Android devices, not to mention Google Search, anyone with a website needs to track what Google prioritizes for the web. If the search ranking factor wasn’t enough for web developers and website owners to pay attention, the Chrome changes should make them reconsider.

Starting with Chrome 85 for Android (currently in beta), Google will label fast links via the link context menu. The Chrome for Android changes are part of a larger plan of having Chrome “highlight high quality user experiences on the web.” Indeed, Google says it “may also experiment with labeling in other parts of Chrome’s UI.”

The labels are based on signals from Core Web Vitals metrics, which measure dimensions of web usability such as loading time, responsiveness, and the stability of content as it loads. Google says that links to pages that have historically met or exceeded all metrics thresholds for the Core Web Vitals will get the new “Fast page” label. You’ll see the label when you long-press a link prior to navigating to a page.

Here is Google’s justification for the change:

The changes that site owners make to improve on these aspects work towards making the web more delightful for users across all web browsers. Investing in these critical user-centric metrics helps to drive usability improvements for users and helps businesses see increased engagement.

Google says the “Fast page” label may appear on a link if the URL or URLs like it “have been historically fast for other users.” In other words, the link may not necessarily be fast for you. When Google has insufficient URL data to assess speed, the labeling will be based on aggregated historical data from a site’s URLs with similar structure. That can happen, for example, when the URL is new or less popular.

Google plans to update Core Web Vitals annually. The company said in May that the changes will trickle down to Google Search ranking. Today, the company said changes to Chrome labels will also be aligned as Core Web Vitals evolve. That way, Chrome should label pages against “the metrics that are most representative of a user’s overall experience.”

To optimize for Core Web Vitals, website owners will likely have to invest in improving page quality. Google has updated its Web Vitals tools to surface information and recommendations across Lighthouse, DevTools, PageSpeed Insights, and the Search Console. 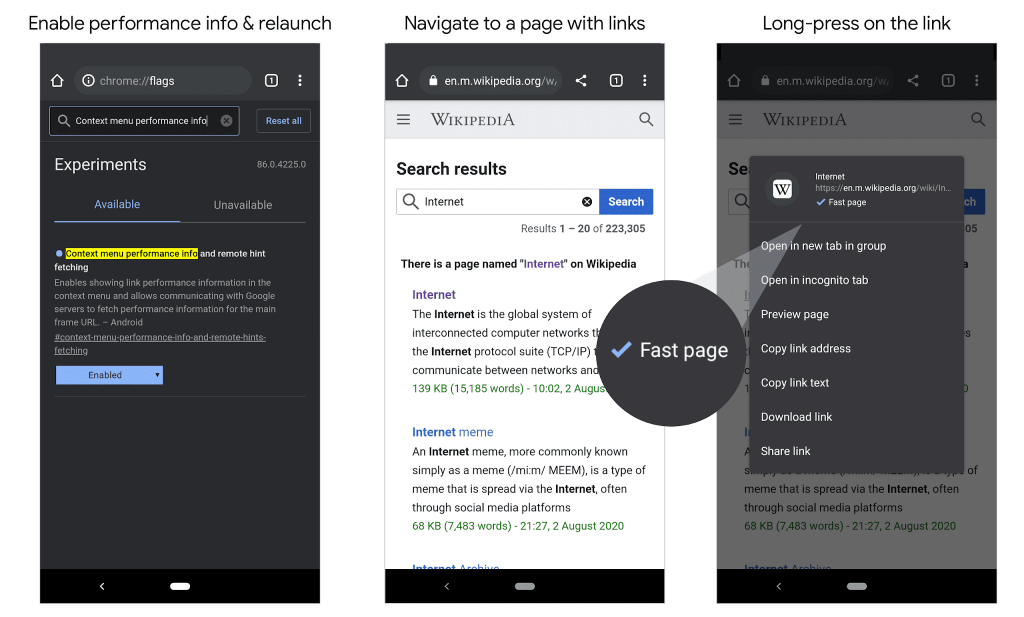 While labeling is currently being rolled out to Chrome 85 beta, you can test it out now by going to chrome://flags and enabling “Context menu performance info and remote hint fetching.” Then open a webpage and long-press on any link.

Google has a long history of using labels to encourage behaviors it wants. In November 2014, Google started labeling sites as “mobile-friendly” to denote pages optimized for phones. The company then experimented with using the label as a ranking factor, ultimately pushing those changes in April 2015 and increasing the effect in May 2016. Google removed the label in August 2016, noting that most pages had become “mobile-friendly.” In 2018, Google Search started ranking faster mobile pages higher.

It looks like Google wants to go through the same exercise using Web Vitals.