Amazon is rolling out a new contactless technology that enables consumers to make payments and carry out other in-store transactions using the palm of their hand. The internet giant has big plans for this technology, including offering it to third parties.

Amazon One, as the feature is called, fits into the company’s broader push into the brick-and-mortar realm, which kicked off in 2016 with the launch of Amazon Go retail stores. Equipped with computer vision, sensor fusion, and deep learning, Amazon’s cashierless stores are designed to be friction-free, enabling shoppers to walk in and out without waiting in line.

Starting in two Amazon Go stores in Seattle from today, shoppers will be able to register the palm of their hand as a unique identifier and then insert their credit card into the Amazon One device located at the entrance to associate their payment credentials with their hand. They will then be able to enter Amazon Go stores simply by hovering their palm over the Amazon One device. 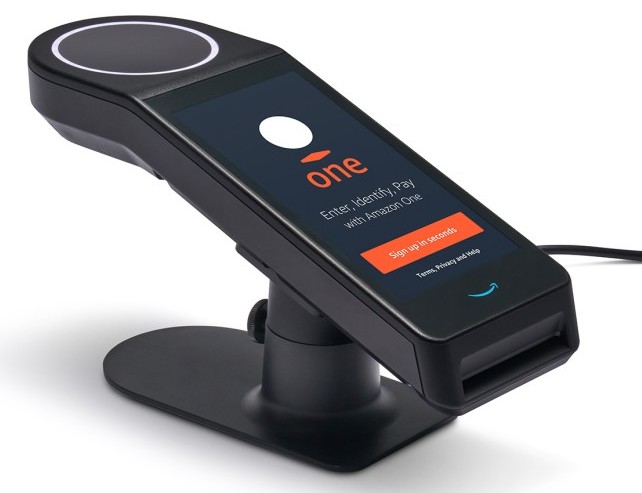 Above: Amazon One device

This is on top of existing options, including using Amazon’s mobile apps or asking in-store staff to handle cash transactions.

However, Amazon One wasn’t designed just to verify users for payments in Amazon’s stores. The company said it wants people to use their palm to facilitate “everyday activities” like presenting loyalty cards and verifying their identity before entering sports stadiums, offices, third-party grocery stores, and more.

Following its debut in the first two Amazon Go stores, Amazon One will arrive in “additional Amazon stores” in the coming months — a move that could see the technology added to hundreds of Whole Foods stores. Indeed, reports emerged last year that Amazon was quietly testing such technology in some Whole Foods stores. Looking further into the future, we can expect to see Amazon-powered palm-recognition smarts crop up in office buildings, sports arenas, and shopping malls everywhere.

While Amazon doesn’t state what characteristics it looks for when creating unique palm identifiers, in a patent it filed in 2018 the company suggested the system looks for features such as wrinkles and veins. Apple also recently filed a patent application for a similar feature that could allow Apple device users to authenticate themselves using their palm.

In a world increasingly wary of biometric data programs, with Amazon itself at the center of controversies over its facial recognition technology, this latest foray into large-scale biometric data-gathering will undoubtedly raise eyebrows. Amazon has tried to ward off these concerns in a FAQ that explains some of the advantages of palm-recognition versus alternatives such as facial recognition:

We selected palm recognition for a few important reasons. One reason was that palm recognition is considered more private than some biometric alternatives because you can’t determine a person’s identity by looking at an image of their palm. It also requires someone to make an intentional gesture by holding their palm over the device to use.

The company added that palm images are not stored locally on Amazon One devices and are instead encrypted and processed in “a highly secure area” that it “custom-built” in the cloud.

The company is also quick to stress that you don’t need an Amazon account to use Amazon One — just a mobile phone number and a credit card. However, those who link their palm ID with their Amazon account are able to manage their information online and see their usage history.