Three years ago, Procter & Gamble (P&G), a Fortune 50 company with over 70 brands and $67 billion in revenue, began looking for tools that could assist its service representatives in resolving customer queries faster but with an enhanced focus on quality. After evaluating a number of tech platforms that might suit the company’s particular needs, P&G chose Agara Labs, a New York-based, AI-driven autonomous voice agent startup specializing in enterprise applications.

According to CEO Abhimanyu, who cofounded Agara with CTO Arjun Maheswaran in 2017, P&G needed a product that could answer questions like “What should be the best-suited response for this query?” and “Should I be offering a financial reward to this customer?” Decision makers at the company also wanted to be able to identify the information most relevant to a query and determine whether it required an agent’s attention, so as to quickly ascertain the urgency of the query.

Agara says its technology is designed to handle entire customer support workflows, from registering queries and troubleshooting to carrying out fulfilment tasks like processing refunds, thanks to a conversational IVR system that redirects customers and a virtual voice agent that handles basic calls. Unlike some generic AI solutions, the company’s models are purpose-built for industries and trained with over 10 million data points, according to an Agara spokesperson. 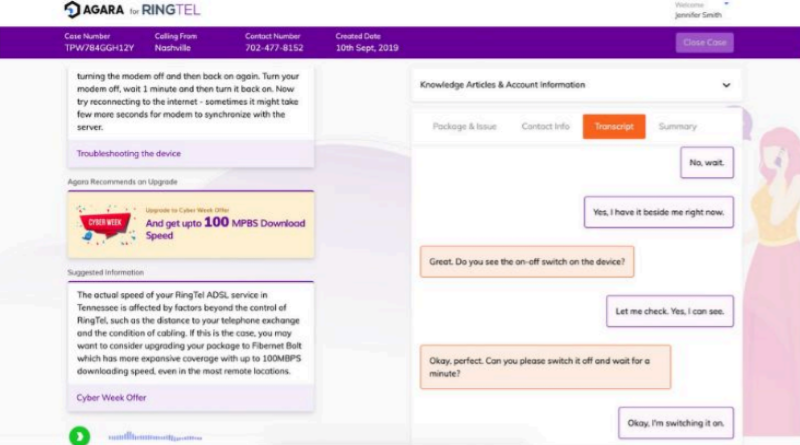 Agara claims its speech recognition models were trained on mobile phone mics capable of canceling channel noise like background conversations. A natural language processing engine identifies intent — i.e., what the user wants — as well as the tone and sentiment and “entities” such as the names of the products and dates. Agara carries context throughout the call and supplies contextually relevant responses to customer support agents. And on the text-to-speech side, the platform leverages a model that adapts its prosody based on sentiment and the nature of the query, so that the tone in which it speaks to an irate customer is different from how it speaks to a customer calling to thank someone.

After P&G deployed Agara’s platform, case handling time decreased by a minute, leading to a 25% overall cost reduction. Moreover, the platform automated over 80% of tasks agents previously performed manually, like writing call summaries and switching between systems to get particular answers. Agara says that over the course of two and a half years post-deployment with P&G, it shaved off the equivalent of 833 days from the waiting time between raising a query and getting it resolved.

In perhaps another sign of investor confidence, Agara today announced a $4.3 million pre-series A extension round led by UTEC, which included participation from existing investors Blume Ventures and RTP Global. It brings the company’s total raised to date to over $7 million.