Plus, a startup developing autonomous truck technology, today announced it has completed a $200 million series B round led by new investors Guotai Junan, Hedosophia, and Wanxiang. Plus plans to use the funds to accelerate the commercialization and deployment of its automated trucking system. As the company begins mass production in 2021, Plus says it will develop a sales, engineering, and support network to help fleets integrate its platform into their daily operations. The company will also scale deployments in the U.S. and China and expand to Europe and other parts of Asia.

Some experts predict the pandemic will hasten adoption of autonomous vehicles for delivery. Self-driving cars, vans, and trucks promise to minimize the risk of spreading disease by limiting driver contact. This is particularly true with regard to short-haul freight, which is experiencing a spike in volume during the COVID-19 outbreak. The producer price index for local truckload carriage jumped 20.4% from July to August, according to the U.S. Bureau of Labor Statistics, most likely propelled by demand for short-haul distribution from warehouses and distribution centers to ecommerce fulfillment centers and stores.

Cupertino, California-based Plus, which was cofounded in 2016 by Stanford Ph.D. students Hao Zheng, David Liu, Shawn Kerrigan, and Tim Daly, aims to develop semiautonomous trucks in partnership with automakers, chipmakers, and shipping companies. Its technology relies on a combination of radars, lidar sensors, and cameras to “see” 360 degrees around, with a fusion-based perception system that allows Plus-equipped driverless trucks to track vehicles hundreds of meters away. Plus says it trains and deploys a number of AI models to perform tasks like detecting and analyzing ground objects and road structures, and to predict the behavior of its trucks and surrounding vehicles. Complementary models and mechanisms like odometry provide functional redundancy and ostensibly ensure smooth transitions between operating modes.

“[Our] models were trained using a diverse dataset consisting of data collected from 14 states in the U.S. and seven provinces in China under varying environmental conditions, including rain, snow, dust storms, and fog. Data augmentation was done using a combination of heuristics, simulation, and generative adversarial networks (GANs) to ensure that the models generalize to novel situations to mitigate potential bias,” Liu told VentureBeat via email. “For example, we can create realistic images of new kinds of road geometries and textures using GANs, even when that is not part of the data collected. Event miners are used to automatically identify interesting data segments containing new information by temporal correlation and cross-correlation with other sensors. An example of interesting data is an object that should have been detected but was not. When new model versions are trained, we make sure that this new class of information gets incorporated appropriately and the model’s capacity continues to develop.”

Back in March 2017, Plus, which has around 200 employees in its U.S. and China offices, became one of the first driverless trucking companies to land a California Autonomous Vehicle Testing License, which allows manufacturers to test autonomous vehicles with a human in the driver seat. The company claims to have partnered with some of the world’s largest logistics providers, some of whom have preordered its driving platform ahead of mass production in 2021 with heavy truck manufacturer FAW. (Plus says it has over 10,000 units of preorders so far.) 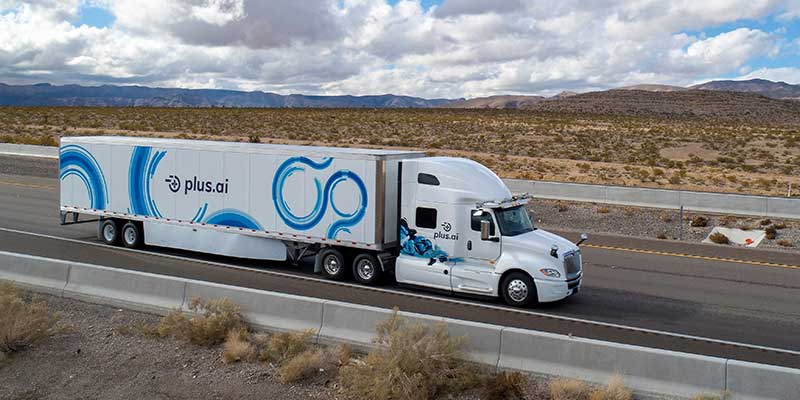 In December 2019, Plus completed a cross-country commercial freight run in the U.S. with Land O’Lakes. It has also put its automated driving system through independent testing via the Transportation Research Center, a vehicle test facility and proving grounds.

“Trucking accidents and a growing truck driver shortage affect our economy and daily lives. All of us at Plus are inspired every day to develop automated trucks that are going to make our world safer and greener and help fleets drive more fuel efficiently and reduce operating costs,” Liu said in a statement, adding that Plus expects to have its automated driving system deployed on “tens of thousands” of trucks across the U.S., China, and Europe in the next few years. “The additional funding and continued support of our investors will help us further scale our commercialization efforts, enabling us to serve fleets in more countries.”

Plus has competition in Daimler, which in 2018 obtained a permit from the Chinese government that allows it to test self-driving cars powered by Baidu’s Apollo platform on public roads in Beijing. And startup Optimus Ride built out a small driverless shuttle fleet in Brooklyn. Waymo, which has racked up more than 20 million real-world miles in over 25 cities across the U.S. and billions of simulated miles, in November 2018 became the first company to obtain a driverless car testing permit from the California Department of Motor Vehicles (DMV). Other competitors include Tesla, Aptiv, May Mobility, Cruise, Aurora, Argo AI, Pronto.ai, Pony.ai (which this week raised $100 million), and Nuro.