Jumio, an AI platform that offers identity verification as a service, today announced the closure of an over $150 million fundraising round, bringing its total raised to $163 million. The company, which claims the tranche is among the largest ever for an identity verification startup, plans to put the capital toward hiring and expanding its customer base.

Javelin Strategy reported that 6.64% of consumers, or about 16.7 million people, fell victim to identity fraud in 2017, up 1 million from 2016. In 2018, over 2.6 billion records were stolen or exposed in more than 1,100 data breaches around the world. That’s perhaps why by 2022, 80% of organizations will be using document-centric identity proofing as part of their onboarding workflows, which is an increase from approximately 30% today, according to Gartner.

Palo Alto, California-based Jumio was relaunched in 2016, when the company emerged from bankruptcy as it was being investigated by the U.S. Securities and Exchange Commission after restating its 2013 and 2014 financials. In 2019, the agency fined Jumio’s original founder and former CEO Daniel Mattes more than $17 million to settle the charges that he defrauded investors, including Facebook cofounder Eduardo Saverin.

Jumio is now owned by private equity firm Centana Growth Partners and says its products have helped to verify over 300 million identities for hundreds of customers including Airbnb, Coinbase, United Airlines, and Instacart. In 2018, Montreal-based Jumio AI Labs was founded, dedicated to the creation, experimentation, and at-scale deployment of machine learning and deep learning technologies related to online identity verification, data extraction, fraud detection, and risk scoring. And in 2020, Jumio claims to have achieved record revenues, culminating in the acquisition of San Francisco-based Beam Solutions’ anti-money laundering platform, which focuses on mobile transaction monitoring and case management.

Jumio integrates with websites, iOS and Android apps, and more to enable businesses to confirm users are who they say they are for new account onboarding, fraud detection, age verification, and transaction monitoring. The platform combines biometrics for identity proofing and “ongoing” 3D face authentication, powered in part by technology from Nevada-based FaceTec. Users first snap a photo of their driver’s license, passport, or ID card and then use a mobile device camera or webcam to capture their faces. In the course of authentication, Jumio compares the “selfie” — a 3D face map containing 100 times the liveness data of a 2D photo — with the picture on the aforementioned ID and retakes the selfie for good measure. 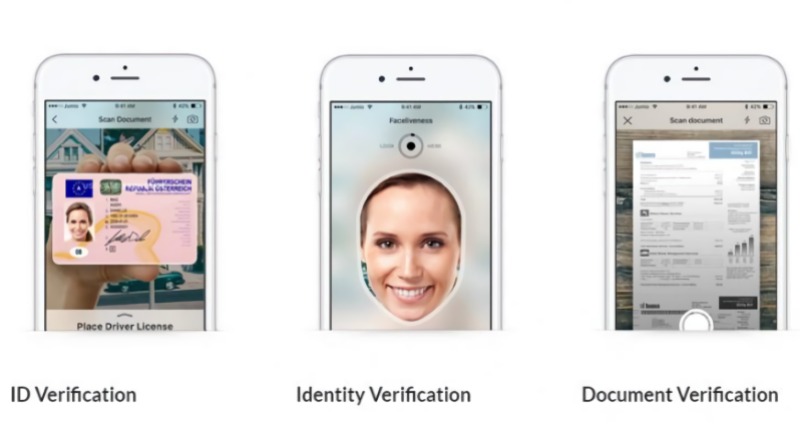 Jumio claims to leverage 10 years of real-world data, hundreds of millions of domain-specific data points from 3,500 ID types across 200 regions, AI for liveness detection, and face-based biometrics to power its authentication products. Beyond verifying identities, Jumio offers services that monitor transactions and customers to identify suspicious or unusual activity. The company also provides solutions that automatically determine proof of address from pictures of utility bills, credit cards, and bank statements to validate and corroborate addresses with independent third-party sources.

“Jumio leverages AI in every identity verification that we process,” CEO Robert Prigge explained to VentureBeat via email. “Jumio uses AI to align pictures of ID documents so that we can reliably optical character recognition (OCR) the data. Jumio uses AI to inspect an ID for signs of fraud or tampering. Jumio uses AI as part of its liveness detection to ensure that the person is physically present and to compare the picture in the selfie with the picture on the ID document. We have dozens of AI and machine learning models in place to improve the user experience, sniff out fraud, and to expedite the customer experience. Powered by informed AI, Jumio’s OCR engine overcomes many of the limitations of traditional OCR and is capable of highly accurate data extraction — data that can be used to ping third-party databases or to verify a person’s age (based on the date of birth).”

The pandemic has led to an uptick in the types of fraud that Jumio claims its platform can actively prevent. A recent report from Socure found that fraudulent credit card applications jumped 93% from March to April 2020. Between March and late June, attempted money transfer fraud increased 43% as challenger banks experienced a 200% climb in attempted demand deposit account fraud.

“The pandemic expedited digital transformation efforts as physical locations and face-to-face verifications became impossible. When consumers turned to digital transactions during the pandemic, companies’ need to verify the identity of users skyrocketed. Jumio processed its single-highest volume of identity verifications in 2020, compared to any other quarter in the company’s history,” Prigge said. “The growth has also been driven by enterprises switching from data-centric approaches to document-centric approaches to identity proofing. This exodus was caused, in large part, by large-scale data breaches of personally identifiable information which have rendered data-centric approaches less reliable.”

For example, Jumio recently partnered with delivery startup Rappi to help verify the identities of its new customers and couriers. Since partnering with Jumio, more than 750,000 users have opened new Rappi payment accounts, according to Prigge. “At a time where remote operations have made it challenging to verify identity online, we’re proud to provide a secure solution for enterprises to detect fraud and confirm their users are who they claim to be,” he said.

Great Hill Partners led this latest investment in Jumio — one of the single largest funding rounds in the digital identity space. Jumio, who counts among its previous backers Millennium Technology Value Partners, now employs over 1,500 people across its offices in North America, Latin America, Europe, and Asia Pacific.