MeetinVR has launched its app for collaborative meetings in virtual reality. It is available in the Oculus Store and can run on the Oculus Quest and Quest 2 platforms.

Cristian-Emanuel Anton, CEO of MeetinVR, said in an email to VentureBeat that the app costs 35 euros a month ($41.38) and can accommodate as many as 35 people in the same room. You can try it out for free on the Oculus Store, but the full version is available on www.meetinvr.com. It’s a solution if you want to escape Zoom during the ongoing pandemic.

Anton’s vision is to make both customer and internal business meetings better than in real life. The app does this by making human interaction more intuitive and effective, according to Anton, and by giving participants “superpowers.”

The need for remote working solutions continues to rise and is creating a permanent change in enterprise meeting environments across the globe. Because of this change, Fortune 500 companies and private users are keen to explore the possibilities of VR collaboration. Within the past five years, MeetinVR has signed many multinational corporations.

I’ve tried it out, and the VR application is designed in a very intuitive manner, with attention to detail such as fun backgrounds where you can look out of windows that are in outer space.

The solution is available on stand-alone VR headsets including the Oculus Quest 1 and 2, Pico Neo 2, and computer-tethered HMDs. Since not everyone has their own virtual reality headset yet, MeetinVR provides a desktop solution that allows anyone to interact with their virtual reality environments using the hardware they already have. 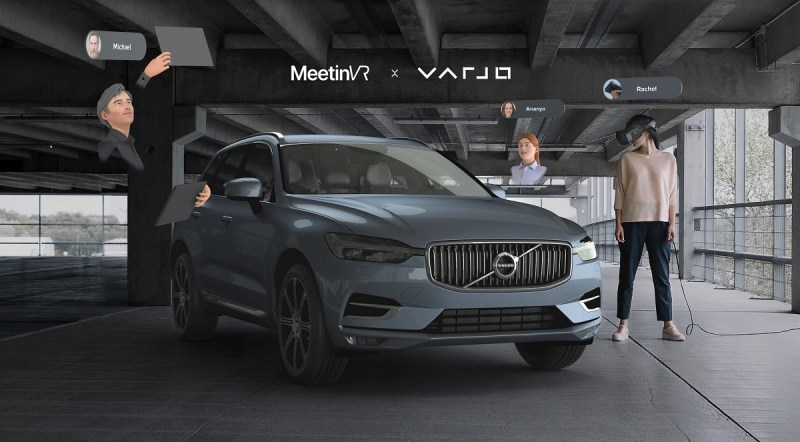 Above: MeetinVR teamed up with Varjo.

The app has VR collaboration tools such as spatial sound, 2D/3D drawing, and speech-to-text note-taking. MeetinVR also has distinctive features such as being able to shake hands virtually, 360 media casting, Microsoft OneDrive integration, meeting management, and a set of tools for workshop participants, facilitators, and moderators.

Last year, the company announced partnerships with Wolf3D and Varjo. The Wolf3D integration has brought personalized selfie-based avatars to the platform. This feature, as well as content upload, meeting scheduler, and team management, is available for registered users only.

MeetinVR and Varjo have a bundle offer combining the Varjo mixed-reality headset and the MeetinVR app.

If you’re used to working with video calls and prefer sticking to what’s familiar, MeetinVR will soon have a solution for that as well. MeetinVR will feature essential integrations, allowing you to peer into the world of VR via the video conferencing solution within just a few simple clicks.

And non-VR users can do more than just listen — they can actively participate in VR meetings. In the upcoming update, desktop users will see more features and functionality without any additional hardware costs.

The company has 14 employees and it raised $2.35 million. Copenhagen-based MeetinVR offers a platform similar to Spatial, Breakroom, and Arthur, all designed to use the 360-degree immersion of VR for meetings and events.