Opsera, a continuous orchestration platform for DevOps, today announced it has closed a $15 million series A round led by Felicis Ventures. Opsera says it will put the capital toward growing its engineering team and accelerating its sales, marketing, and customer success initiatives.

An estimated 19% to 23% of software development projects fail, with that statistic holding steady for the past couple of decades, according to data compiled by Ask Wonder. Standish Group found that “challenged” projects — i.e., those that fail to meet scope, time, or budget expectations — account for about 52% of software projects. Often, a lack of user involvement, executive support, and clear requirements are to blame for missed benchmarks.

Opsera, which was founded in 2020, aims to combat DevOps challenges with a self-service, no-code orchestration platform that lets engineers provision or integrate their CI/CD tools from a common framework. With Opsera, users can build declarative pipelines for a range of use cases, including software delivery lifecycle, infrastructure as code, and software-as-a-service app releases. Opsera correlates and unifies data throughout the development process to provide contextualized diagnostics, metrics, and insights.

The DevOps market is projected to reach $14.97 billion by 2026, at a compound annual growth rate of 19.1%, according to a Fortune Business Insights report. Opsera competes directly or indirectly with companies including Harness, a continuous integration and delivery platform for engineering and DevOps teams, and Tasktop, which recently nabbed $100 million. There’s also OpsRamp, which applies AI to DevOps processes. And Productboard offers a product planning interface designed for DevOps orchestration.

But Opsera claims to have a growing client roster that includes “several” Fortune 500 customers. 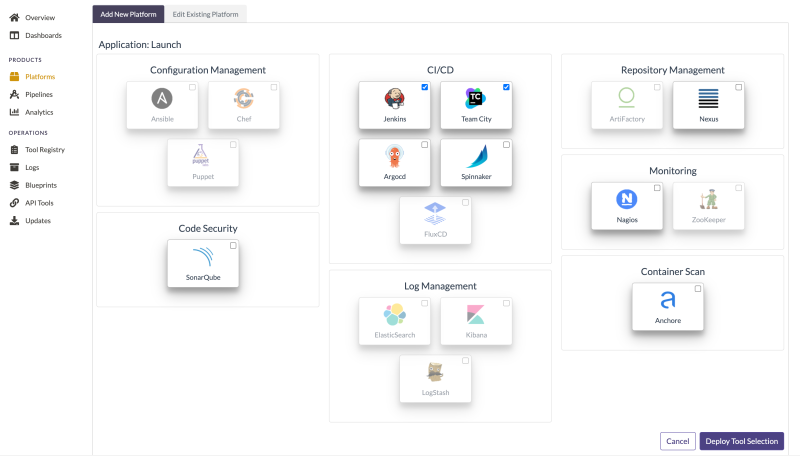 Above: Toolchain automation in Opsera.

“Our mission is to democratize software delivery by abstracting any CI/CD tools into a common framework that can empower engineers to build pipelines in minutes, not days or weeks,” cofounders Chandra Ranganathan and Kumar Chivukula said in a press release. “We offer the only DevOps platform that connects and orchestrates the entire tool stack with complete choice and visibility. Our customers can focus on their core product and will never waste time and resources building and managing toolchains and pipelines in-house or be stuck with single-vendor solutions. Having the support of Felicis and all of our investment partners will accelerate how we help customers along their DevOps journey.”