Explorium, a startup developing an automated data and feature discovery platform, today closed a $75 million funding round led by Insight Partners with participation from existing investors. The capital, which brings the company’s total raised to $127 million to date, will be used to expand Explorium’s platform after a year in which it doubled its customer base and more than quadrupled revenue, according to CEO Maor Shlomo.

In machine learning, a feature is a property or characteristic of the phenomenon being observed. Features are usually numeric, but structural features such as strings and graphs can be used in pattern recognition. Feature engineering — the process of using domain knowledge to extract features from raw data via data-mining techniques — is often arduous. According to a Forbes survey, data scientists spend 80% of their time on data preparation, and 76% view it as the least enjoyable part of their work. It’s also expensive. Trifecta pegs the collective data prep cost for organizations at $450 billion.

San Mateo, California-based Explorium aims to solve this by acting as a repository for a company’s information, connecting siloed internal data to thousands of external sources on the fly. Using machine learning, the company claims to automatically extract, engineer, aggregate, and integrate the relevant features from data to power sophisticated predictive algorithms, evaluating hundreds before scoring, ranking, and deploying the top performers.

“Explorium was founded by three Israeli entrepreneurs, Omer Har, Maor Shlomo, and Or Tamir. Maor and Or met while serving in the Israeli Defense Forces. They recruited Omer, and together, the three set out to create a platform for data science professionals,” a spokesperson told VentureBeat via email. “Explorium provides access to thousands of data sources and more important, identifies the data signals that mattered most, aligning those signals with internal data so they can be immediately incorporated into any analytical process.”

For enterprises using predictive models to forecast consumer behavior, data drift was a major challenge in 2020 due to never-before-seen circumstances related to the pandemic. Organizations were forced to constantly retrain and update their machine learning models, and 12 months later, many are still wrestling with the challenge.

Indeed, a recent MIT survey suggests that just 13% of organizations are delivering on their data strategy, with challenges in managing the end-to-end lifecycle presenting the biggest barriers. Alation’s latest quarterly State of Data Culture Report similarly implies that, because of data quality issues, only a small percentage of businesses are using AI effectively across the organization.

With Explorium, lenders and insurers can discover predictive variables from thousands of data sources, while retailers can tap the platform to forecast which customers are likely to buy products. Data scientists can add custom code to incorporate domain knowledge and fine-tune AI models. And admins gain tools designed to uncover optimization-informing patterns from large corpora.

In April 2020, Explorium added a new set of signals to help organizations understand risk derived from the pandemic. By combining variables like internal company data, policy factors, and geographic factors that might affect a company’s repayment or operability, the platform generates an overall risk score. For instance, a health system that’s considered essential and receives federal aid would have a lower risk than a hotel that’s closed and not considered critical.

“Explorium offers hundreds of curated premium and public external data sources that have been validated, checked for regulatory compliance, normalized and distilled into thousands of proprietary signals. Explorium’s external data gallery covers multiple categories including, but not limited to, company data, people data, geospatial data, time-based data, and product data,” the spokesperson continued. “The platform automatically analyzes the user’s data in context, engineers and generates features, and presents the user with an optimal feature set through an internal ranking mechanism based on feature interactions, feature scoring, and proprietary algorithms.” 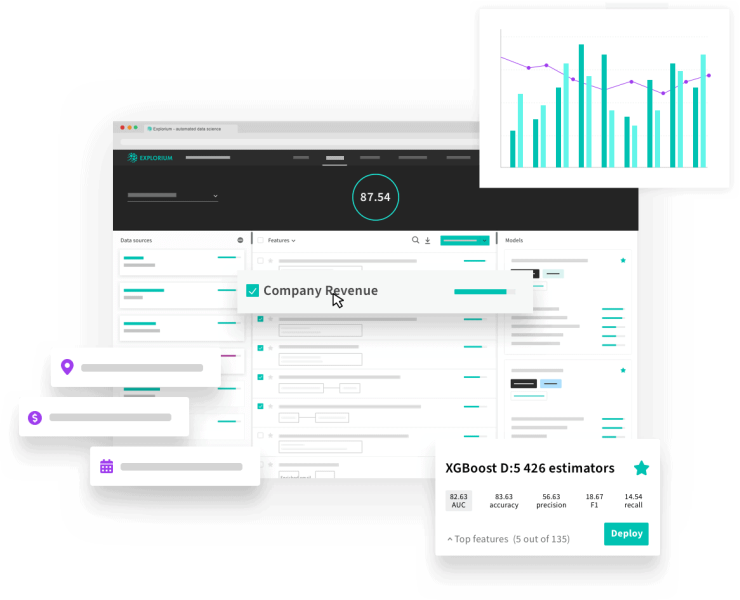 Above: A screenshot of Explorium’s platform.

According to market research firm Tractica, the global AI software market is expected to experience “massive” growth in the coming years, with revenues increasing from $9.5 billion in 2018 to an expected $118.6 billion by 2025. A number of startups are attempting to cash in on the trend (or have already done so), including Kaskada and Determined AI, which recently raised $11 million to further develop its deep learning model development tools for data scientists and AI engineers. Meanwhile, Iguazio nabbed $24 million for its suite of AI development and management tools, and Clusterone raked in $2 million for its DevOps for AI platform that operates with both on-premises servers and public cloud computing platforms like AWS, Azure, and Google Cloud Platform.

For Explorium’s part, the company claims to have doubled its customer base and quadrupled its revenue in the past 12 months. “Dozens” of brands now use the platform, Shlomo says, including PepsiCo, Melio, and OnDeck.

“The pandemic accelerated Explorium’s business in two ways: (1) It made AI models and business analytics obsolete, forcing businesses to scramble for external data, and (2) it made the ongoing pain of obtaining external data impossible to ignore, inspiring many businesses to look for a long-term solution,” Shlomo told VentureBeat. “The pandemic was a turning point for a lot of companies. They realized just how much they needed external data, and how hard it was for them to get it and use it for their business.”