Security operations teams have a data management problem: The volume of security alerts they have to process is so high they can miss signs of an attack. In the first Voice of SecOps report from security vendor Deep Instinct, 86% of respondents said tools driven by data science — which includes artificial intelligence, machine learning, and deep learning — would make a significant impact in preventing unknown threats and reducing false positives. 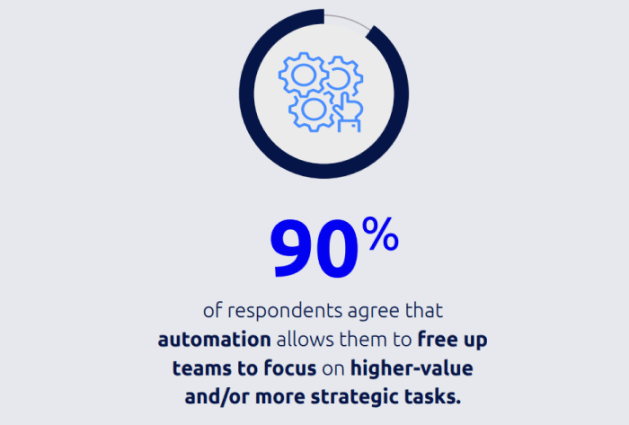 Above: 90% of in the 2021 Voice of SecOps  report said automation frees up teams to focus on high-value and more strategic tasks.

Deep Instinct’s Voice of SecOps report explored strategic threats, overarching priorities, and day-to-day challenges experienced through the lens of security operations teams. According to 64% of respondents, humans are unable to keep up with the exponential cadence of cybersecurity threats. Respondents said they spend about 10 hours a week assessing false positive alerts, and 62% said threats could be missed due to the “overwhelming volume of false positives,” the report found.

IT and security teams are worried about the growing number of attacks. More than 70% of IT and security professionals said it was likely that their company will be hit by a successful ransomware attack. In the United Kingdom, 78% said they were concerned about a possible “global incident” caused by AI developed by sophisticated adversaries.

Almost two-thirds of respondents — 66% — said Solarwinds had led to the hiring of more internal IT and security professionals, with over half saying it also prompted more questions at the board and executive level about cybersecurity measures. More than 60% of companies began considering automated, AI-based solutions following the attacks on Microsoft Exchange.

Many respondents believed — 71% — that automation was the only way to address cyberattacks, and 83% said automation freed up teams to focus on high-value or more strategic attacks. If security professionals had a tool to completely eliminate false positives they would save a quarter of their time –- freeing it up to focus on the identification and prevention of upstream threats, rather than dealing with false alerts for threats that never actually existed in the first place, Deep Instinct noted in its report.

Most of the professionals believed a blend of artificial intelligence, machine learning, and deep learning was vital in the fight against cyberattacks. The key question was not whether to incorporate AI, but rather which AI technology to deploy. In Germany, 32% said a self-learning cybersecurity product would be “extremely useful.”

The Deep Instinct’s Voice of SecOps Report provides insight from 600 IT professionals, including 300 CISOs spread across multiple verticals and geographies. The research was commissioned by an independent marketing & market research company, Hayhurst Consultancy.

Read the full 2021 Voice of SecOps report from Deep Instinct.