Over the next two years, 75% of finance professionals believe their day jobs will significantly change, and 83% said they will have to learn new skills for AI and related technologies, according to a survey of finance processionals around the world from Unit4, a cloud leader in enterprise software. 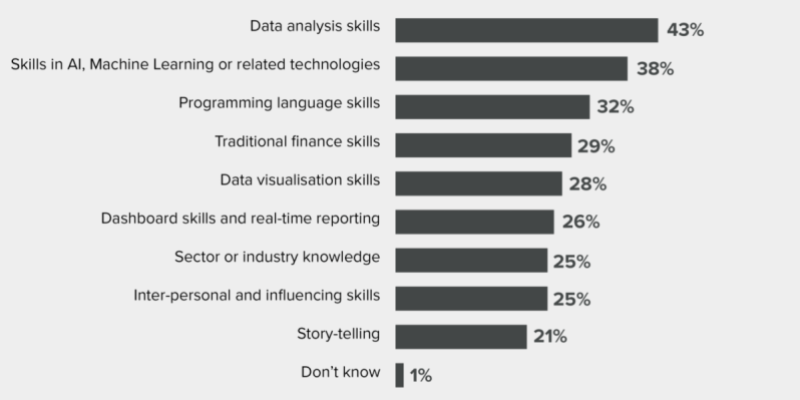 Above: More technical knowledge may be helpful, but the survey shows a surprising lack of emphasis on strategic leadership skills; only a quarter say interpersonal and influencing will be essential for future finance professionals. And only 21% think story telling will be important.

In the next 12 months, more than four fifths of respondents are expecting to focus this upskilling on AI, machine learning, coding, analytics and data science capabilities, but a third of respondents accept that their organizations will need to grow their teams to fully implement the new technology, Unit4 said.

In a survey of finance professionals examining attitudes toward artificial intelligence and its adoption in finance departments, Unit4 found 83% of respondents expected to be increasingly involved in strategy and decision-making. Finance professionals see their roles becoming more strategic in next 12 months as day-to-day roles significantly change, the survey found.

Respondents are limited in their awareness of how AI can be used in the enterprise, but implementing AI seems to enhance market and internal leadership. Less than half — 47% — of those who adopted AI believed their companies were performing strongly, compared to only 28% of non-adopters. Similarly, 49% of respondents working at enterprises with AI deployments felt their companies had strong leadership in contrast to only 32% of non-adopters. And finally, 43% of AI adopters, compared to 21% of non-adopters, believed they will be able to maintain the strong market position over the next year.

Although more than half of all finance teams have implemented AI, it would appear they’ve not taken full advantage of its capabilities and realized the total value it can bring. Ultimately AI is here to stay, and it’s already revolutionizing how we work. Organizations are shifting investment and resources to make this happen; 26% of C-Suite decision-makers who do not currently use AI in their finance departments said they plan to introduce it in the next two years.