Zebra Medical Vision, a computer vision startup focused on health care, today announced it has entered into an agreement to be acquired by publicly traded health firm Nanox. Terms of the deal weren’t disclosed, but a Zebra spokesperson said it was expected to be valued at around $200 million — $100 million upfront and another $100 million tied to specific milestones, all in stock.

Computer vision, which deals with algorithms that can gain a high-level understanding of images and videos, is being applied across a range of medical domains. While some research has raised concerns about bias, startups and incumbents are chasing after a market that’s anticipated to be worth $5.31 billion by 2026, according to Verified Market Research. They argue that a shortage of professionals — the U.S. Bureau of Labor Statistics projects only a 9% increase in the number of radiologic and MRI technicians by 2028 — will necessitate scalable computer vision technologies. Moreover, the companies claim, computer vision has the potential to reduce labor costs, as well as medical imaging workloads. 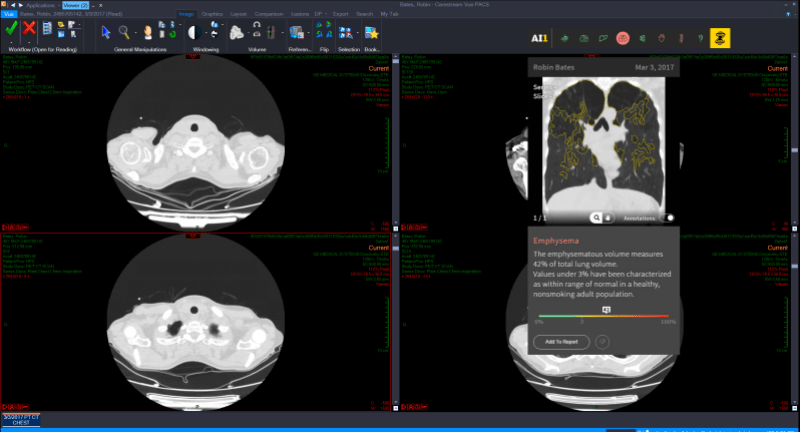 Above: A screenshot of one of Zebra Medical Vision’s diagnostic imaging tools.

Beyond this, Zebra hosts a data repository with over 2 million medical images and has U.S. Food and Drug Administration (FDA)-cleared and CE-marked solutions, including seven FDA-cleared and 10 CE-marked AI solutions for medical imaging — the most recent being a 3D modeling product for x-ray images used for preoperative orthopedic surgery planning. In partnership with several radiological industry associations, Zebra in July lobbied the American Medical Association to allow insurers to reimburse clinicians using the company’s AI in vertebral compression fracture (VCF) detection screenings.

Zebra, which had raised $57.4 million in venture capital, counts over 1,100 hospitals, academic institutions, and care providers among its customers, including InterMountain Healthcare, Johnson & Johnson, Nuance, Nvidia, and the University of Oxford.

Ahead of the acquisition, Zebra pivoted from focusing on diagnosis and triage to leveraging its data to help health care systems evaluate large volumes of patients for chronic conditions. Should the acquisition be completed, CEO Zohar Elhanani says Zebra will combine its capabilities with the acquiring company’s strategy to “accelerate the population health vision” and make medical imaging “more efficient.”

“Zebra Medical Vision has always operated with the goal of expanding the use of AI in medical imaging to improve health outcomes for patients worldwide,” Elhanani said. “At this time, we understand that that vision is best served by joining forces with a trusted partner with the means to boost our capabilities and propel population health, powered by AI, to the next level. Screening populations to detect and treat chronic disease early has proven to improve outcomes, and we’re thrilled to be taking the helm of the population health transformation in health care.”

Nanox also announced today that it has entered into a binding letter of intent to acquire USARAD and its related company, Medical Diagnostics Web, for $30 million in cash and stock. USARAD operates a network of 300 radiologists across health centers, urgent care facilities, and other providers, which Nanox says will provide it access to trained radiologists — lowering the barrier to U.S. market entry and other countries around the globe.

Nanox, which was founded in 2016 by Japanese venture capital tycoon Hitoshi Masuya, hopes to reinvent the x-ray with hardware inspired by Star Trek’s biobed. Its product, called the Arc, is designed to promote the early detection of conditions discoverable by computed tomography (CT), mammography, fluoroscopy, angiogram, and other imaging modalities. A cloud-based software dubbed Nanox.Cloud complements the Arc with value-added services, including a scan repository, radiologist matching, online and offline diagnostic review and annotation, connectivity to diagnostic assistive AI systems, billing, and reporting.

“Expanding access to medical imaging via widespread deployment of the Nanox Arc solves one of the obstacles to achieving true population health management,” Nanox CEO Ran Poliakine said in a press release. “Yet the global shortage of trained radiologists represents a significant bottleneck in the imaging process. The Nanox ARC, together with the acquisitions of Zebra Medical Vision and USARAD, if consummated, would move us toward our vision of deploying our systems and have the support of a large network of radiologists empowered with highly advanced AI algorithms that will allow for the rapid interpretation of medical images into actionable medical interventions, which would represent an end-to-end, globally connected medical imaging solution.”

The pandemic spurred investments in AI across nearly every industry. According to CB Insights’ Q2 2021 report, AI startups attracted record funding — more than $20 billion — despite a drop in deal volume. Health care AI continued to have the largest AI deal share, accounting for 17% of all AI deals ($2.36 billion).