The world’s largest AI research conference is underway in Vancouver, Canada. Researchers are presenting more than 1,400 papers at the Neural Information Processing Systems (NeurIPS) conference, ranging from work that organizers believe has had the greatest impact over the past decade to Yoshua Bengio’s continued march toward consciousness for deep learning.

But even as the conference showed theoretical research and neuroscience-related papers on the rise alongside categories like algorithms and deep learning, the mushrooming of the event itself — and the associated growing pains — was a constant theme, and it speaks to the growth of the AI field in general.

Organizers said that at the start of the conference Sunday, they expected about 400 people to show up for registration. Instead, 4,200 queued up in the conference center registration line.  All told, NeurIPS 2019 welcomed 13,000 attendees, up 40% from the prior year. In all, the conference has quadrupled in size in the past five years.

Organizers started to use a lottery system this year, after 9,000 tickets to 2018 NeurIPS sold out in 12 minutes.

With industry, governments, and academia investing billions, machine learning is red hot right now. The AI Index 2019 report released Wednesday found that private investment, research, and the number of PhD candidates in AI are all growing at healthy rates.

But that growth can come at a cost. As intellectually driven as NeurIPS can be, crowds can get in the way of the intellectual exchanges and scientific critique the event is intended to spawn.

Organizers invited all conference attendees to share feedback in a town hall Thursday, and one of the scientists’ main concerns was how to deal with the event’s rapid growth.

Poster sessions are the most valuable part of the conference, according to many who spoke at the town hall, since they allow you to speak directly with research authors and gain exposure to a broad range of work. At one point, the poster sessions was filled to capacity, making those dialogues difficult. 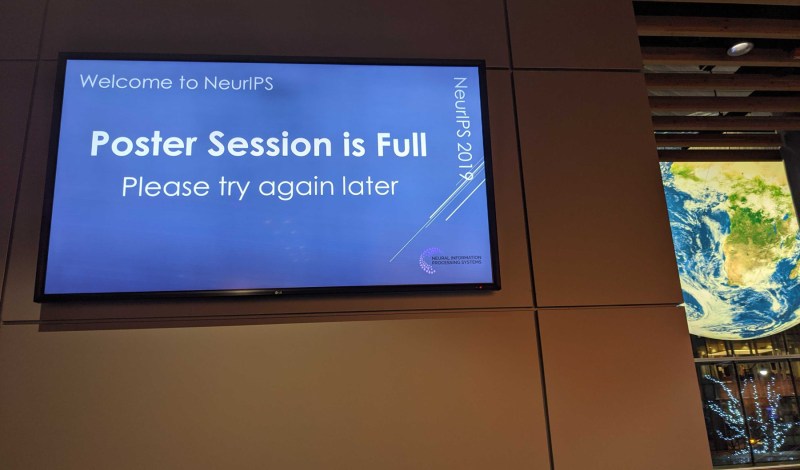 This year’s organizers are considering a lot of potential ways forward: NeurIPS regional meetups were held in more 35 countries this year, and organizers considered splitting the global conference into regional events.

“The idea is instead of having one big meeting, we could have a bunch of satellite meetings,” Terrence Sejnowski, president of the NeurIPS Foundation, said. “I think the idea is we’ll have a bigger audience and greater participation if we had more than one location.”

Should the conference break into regional events, Sejnowski said organizers could randomly dispatch speakers to regional locations and livestream their talks for consumption around the world.

NeurIPS livestreamed major presentations this year and gave researchers ways to critique and question posters online, but a regional approach naturally limits in-person interactions and could also dilute the kind of valuable interactions the global event is intended to produce.

NeurIPS 2020 is back in Vancouver and 2021 will move to Sydney, in a larger space than the Vancouver Convention Center. Organizers may aim for larger venues in the future, like convention centers in places like New Orleans and San Diego, which have capacity of 30,000. Doing so could allow doing away with the lottery system.

Among other changes under consideration for next year: a policy to exclude certain vendors from the industry expo. No rules currently exist to exclude specific vendors. The issue came up following a question from the audience about why the National Security Agency (NSA), a U.S. intelligence organization, had a booth at a conference held in Canada. Next year, researchers may also be asked to share the carbon footprint of training their AI model.

Toward a more open and welcoming NeurIPS

Like last year, attendees from parts of Asia and Africa encountered issues with Canadian immigration officials that kept them from reaching Vancouver. Diversity and inclusion chair Katherine Heller said that as of Monday, 158 initially denied visas were approved, 14 were in progress, and five were denied. Despite the change, some poster sessions displayed signs that said the presenter received a visa too late to attend.

Since the conference will take place in Vancouver again next year, organizers hope to improve communication with the Canadian government in 2020.

But organizers seem to be trying hard to make NeurIPS a more accepting and welcoming place. A child care program was full to capacity for the kids of about 75 researchers. That program is expected to expand next year.

UC Berkeley professor Celeste Kidd gave the opening keynote address, and touched on how tech can drive false facts and misunderstandings of the #metoo movement.

{Dis}ability in AI had its first meeting, and workshops highlighted the work of diverse machine learning practitioners as well as AI that can positively impact the lives of people of African or Latin descent, women, and followers of Islam and Judaism.

At the Queer in AI workshop, people got to choose whether they wanted to be photographed or not, and you could hear presentations about research that seeks to remove gender identity from AI systems.

Some workshops even opened with acknowledgment that the convention took place on the land of the native Coast Salish people.

What you hear about at NeurIPS are the advances in stochastic gradient descent, covariants, and all manner of technical discoveries or steps forward, but there are also workshops on disaster response, privacy, machine learning for the developing world, climate change, and using computer vision to battle cancer.

It’s an insane rush of theoretical, complex approaches to improve the performance of machine intelligence, but also a drive to solve real-world problems and contribute to society.

The other challenge in front of the community, it seems, is growth management. Perhaps regional events help, but interest in a unified international event does not appear to be subsiding.

AI is the top focus of computer science school PhD programs today, and other conferences like ICLR or CVPR are also experiencing growth.

In other words, growth in the AI field will likely continue to drive the growth of NeurIPS. The organizers of the biggest machine learning research conference of the year have to deal with the challenges that growth brings, but that’s a nice problem to have. While they’re making progress toward solving some of those challenges, it seems clear that the importance of physical access to the conference will not subside anytime soon and will likely continue to grow in importance.