A common criticism of smart speakers with a screen is that they’re just a tablet with a voice and some speakers. The entire concept of this genre of devices began with the Echo Show in 2017, and is now spreading to Google Assistant-powered third-party devices from Lenovo and JBL, and potentially a Google Home Hub next month.

In some areas, performance of the first-gen Echo Show seemed a bit half baked, but the second generation made its debut yesterday alongside nearly a dozen other Alexa-powered devices, and it seems capable of making a case for the idea that a smart speaker with a screen is more than just a tablet.

For my first impression with the device, one thing I immediately noticed is a better home screen, which is important because the home screen turns on each time it senses the motion of a person nearby.

Now you can see sports box scores or upcoming games; suggestions for things to say to Alexa are removed from the carousel of content the device toggles through every few seconds.

The screen can also display stock price updates, and photos based on memories a year or two ago can be randomly served up for your home screen, provided you use Amazon’s photo storage service. Smartphone apps like Apple’s Photo often send notifications to encourage people to check out memories from a year ago, and I tend to ignore them. But put memories on a device like an Echo Show that you can situate in your kitchen or bedroom and it seems a bit more likely to be utilized. 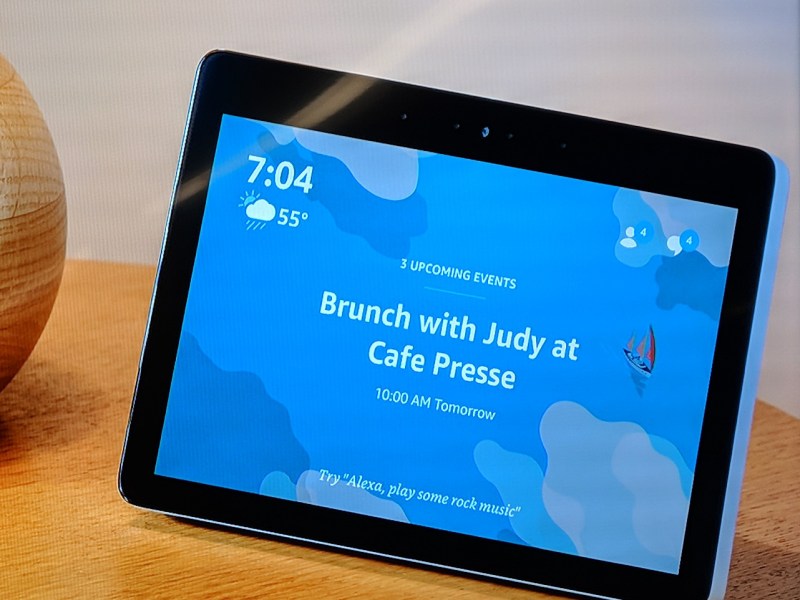 The larger screen makes it more enjoyable to watch one of the trending videos advertised on the Echo Show home screen.

The new home screen also gets rid of bullet points for each card on the screen and gives each card more room, making the carousel feel more open than the previous user interface.

The fact that the home screen shows upcoming sports games gets a lot more interesting when you consider the fact that the Echo Show can share a lot of video. The Fire TV Recast and partnerships with streaming video providers like Hulu and NBC are bringing a lot more options to people for watching video. The first-generation Echo Show was hobbled when, a few months after launch, Google rescinded support for YouTube, giving Google and its partners a pretty big initial advantage in the speaker with a screen space.

It seems likely that the Echo Show could explore content recommendations like the kind reportedly planned for Facebook’s Portal video chat and streaming video device, which is reportedly due out next week. 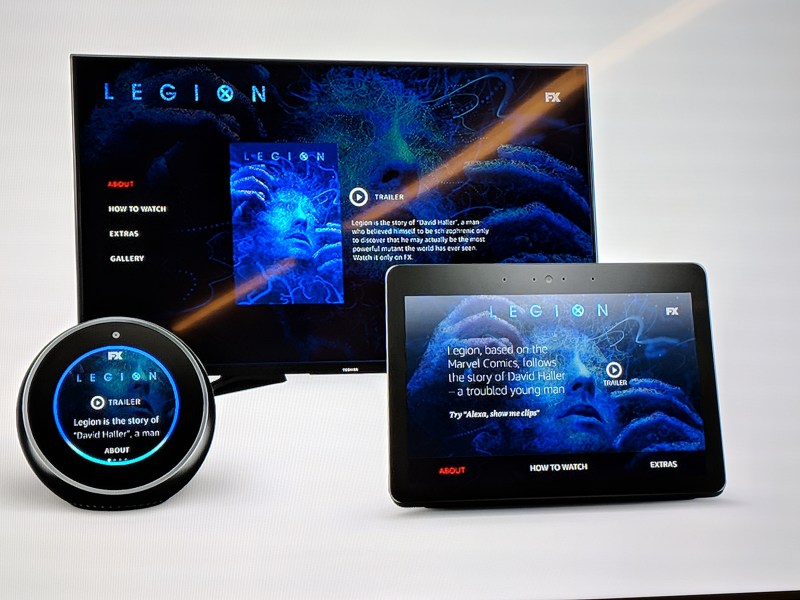 Channel display when you ask for a look at the guide of what’s on right now is pretty good-looking, as this FX page demonstrates. The same display is coming to smart TVs from Sony and other manufacturers.

A Vevo partnership means you can ask to watch specific music videos, also a step up from the original Echo Show.

There’s no doubt that the second-generation Echo Show had to improve its video offerings, and it appears that real improvements have been made; however, I didn’t have enough time with this device to really run it through a series of tests related to its video playback limitations.

The ability to browse the internet with Silk or Firefox is another welcome addition. However, at launch the Echo Show won’t be able to use voice control to navigate to a specific website, so you can’t just say “Alexa, open venturebeat.com,” you have to type it in, making it much less interesting and taking away ease of use. This seems like an oversight for a device looking to make many tasks hands-free.

On sound quality, the environment I was in was just too busy and noisy to recognize any particular details; however, it clearly should be able to fill your average kitchen or most rooms with rich sound.

Whereas before the Echo Show had speakers in the front below the screen, the second-generation model places speakers behind the screen to deliver stereo sound from a passive bass radiator. The Echo Show can also display more art from bands and scroll through song lyrics. 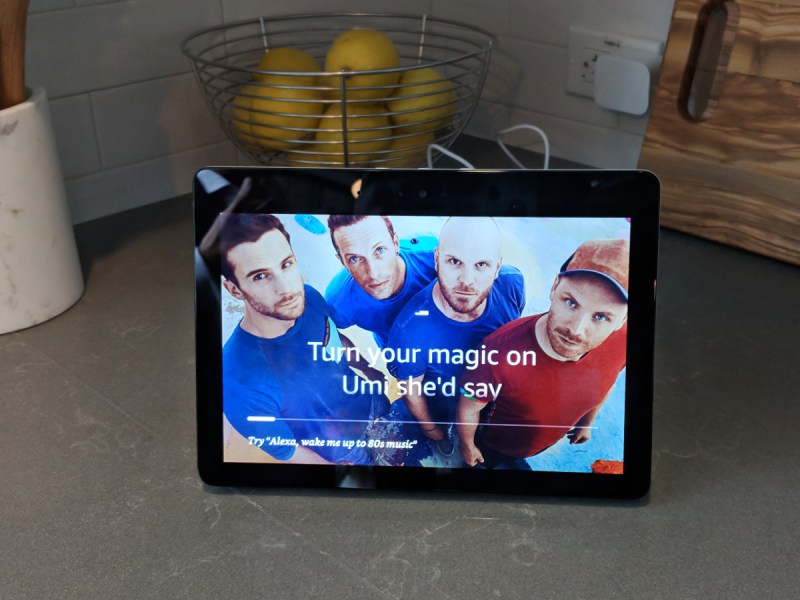 Another major area of improvement: The Echo Show steps up its abilities as a sous chef, helping people prepare meals.

Cooking instructions allow for a fluid back-and-forth motion between steps of a recipe alongside video, which appears to resolve a matter I found lacking in the first-generation Echo Show.

Additional recipe providers like Kitchen Stories, Epicurious, and Food52 also means more variety. Helping people cook meals still seems like a pretty important use case for Amazon, which last year said more than half of all Echo smart speakers are placed in the kitchen.

Like the first Echo Show, the second generation will respond to a request to show you your Dash buttons. Strangely enough, the Echo Show will not be able to automate refills with Dash Replenishment of Amazon’s Meal Kits, a company spokesperson told VentureBeat during a demo of the device. (Also strange: The AmazonBasics Microwave with Alexa voice control comes with Dash Replenishment — but only for popcorn.)

I’d be surprised if meal kit replenishment doesn’t come to Echo Show devices soon to accommodate people who never want to think about what to cook for dinner again. 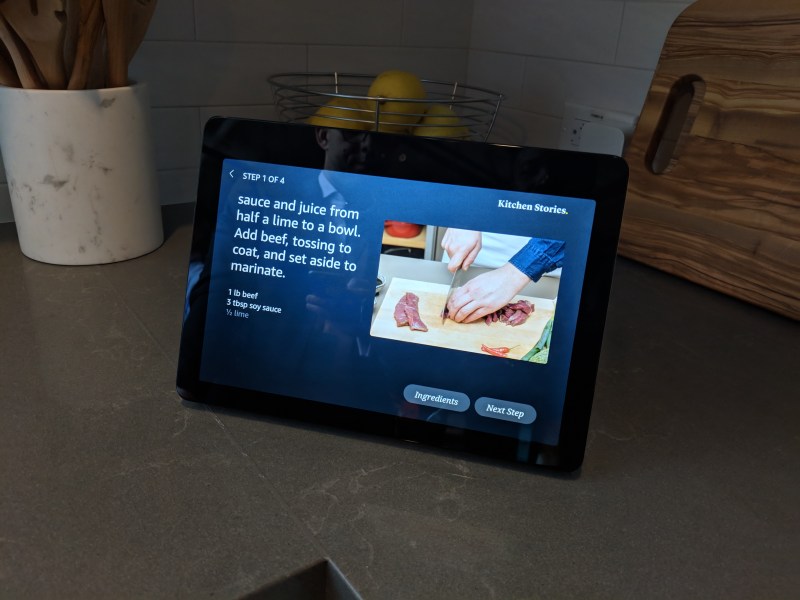 Another issue: There’s no voice command or button to add all the ingredients for a recipe to your shopping list or Whole Foods shopping cart. Enabling this option could make it more likely that people use an Echo Show to discover new recipes, similar to the way people apparently use visual experiences with AI assistants for shopping research.

However, with the newly introduced multi-step requests enabled, you can use your voice to quickly add a list of ingredients to Alexa. Depending on the number of ingredients, you can probably rattle off the list in a single breath. That is a big improvement, and kind of magical to see in action for the first time, the sort of thing you see and wonder why it didn’t exist before.

Speaking of shopping, ask Alexa to order a particular item with the new Echo Show and you see a carousel of options just like you do with the first-gen, but now the items scroll automatically as Alexa describes them to you. That’s a subtle, simple new addition, but it removes the need to flick through results with your finger, and I presume makes it more likely that customers find what they need and order it on Amazon.

The ability to go completely hands-free to get things done is what sets a smart speaker with a screen or tablet in Show Mode apart from simply picking up your smartphone or tablet.

Also of note: More than 1,000 of Amazon’s over 50,000 Alexa skills now come with some visual elements. Visual skills see twice the levels of engagement as voice-only skills, members of the Alexa team told reporters gathered at Amazon headquarters Thursday. That’s part of why the Alexa Presentation Language was introduced Thursday for developers to make more interactive voice app experiences.

It can be challenging to tell what’s happening within a company as big and fast-moving as Amazon, but the initial version of the Echo Show felt rushed or only capable of providing a limited, patchwork experience.

The second generation feels like it drew some lessons from the initial experience as well as quality features from competitors like the Lenovo Smart Display or JBL Link View. Overall it feels like a much more complete and thoughtful device, even if you consider it a smart speaker glued to tablet.