Amazon shared more details today about Amazon Go, the company’s brand for its cashierless stores, including the use of synthetic data to intentionally introduce errors to its computer vision system. Challenges that had to be addressed before opening stores to kill queues include the need to make vision systems that account for sunlight streaming into a store, little time for latency delays, and small amounts of data for certain tasks.

Synthetic data is being used in a number of ways to power few-shot learning, improve AI systems that control robots, train AI agents to walk, or beat humans in games of Quake III.

“As our application improved in accuracy — and we have a very highly accurate application today — we had this interesting problem that there were very few negative examples, or errors, which we could use to train our machine learning models,” Dilip Kumar, VP of Amazon Go, said. “So we created synthetic datasets for one of our challenging conditions, which allowed us to be able to boost the diversity of the data that we needed. But at the same time, we have to be careful that we weren’t introducing artifacts that were only visible in the synthetic data sets, [and] that the data translates well to real-world situations — a tricky balance.”

“Nearly everything that we talked about that [during the keynote address] is using large datasets to train models and create inference gets better if you have simulated data. The problem, of course, is that you can end up with bias in simulated data and blind spots and edge cases and so on,” Wilke said. 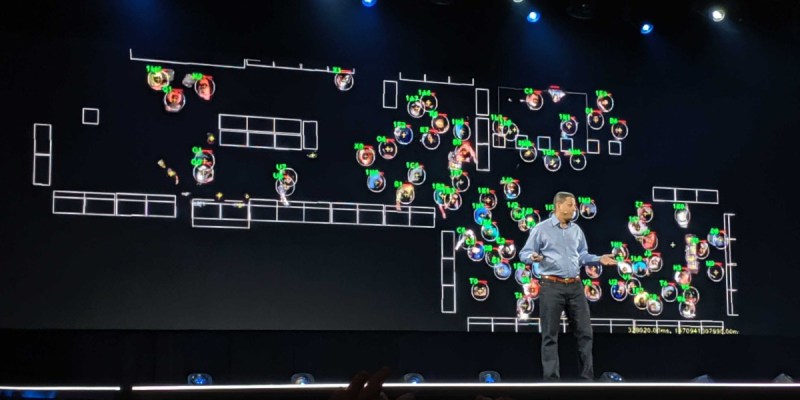 Above: Amazon VP Dilip Kumar shares a map of a Go store onstage at re:Mars at the Aria Hotel in Las Vegas on June 5, 2019.

In addition to the use of synthetic data and trials with human customers, Amazon engineers made computer vision algorithms that utilize both geometry and deep learning to ensure Go stores accurately associate transactions with the right customer. To meet the need for crunching data from videos in real time, Amazon also created Kinesis, a service that has since been incorporated into AWS RoboMaker.

Amazon first introduced the idea of a cashierless store to the world in 2016 with the opening of a trial location near its company headquarters in Seattle. Amazon Go now has 12 locations, in Seattle, Chicago, San Francisco, and New York.

To support people without bank accounts or debit cards — or those whose phone batteries are dead and cannot access the Amazon Go app — Amazon announced plans in April to accept cash payments like traditional stores.