The COVID-19 crisis — and corresponding rise in online shopping — threatens to push supply chains to the breaking point. Early during the pandemic, for example, Amazon was forced to restrict the amount of inventory suppliers could send to its warehouses. Ecommerce order volume has increased by 50% compared with 2019 and shipment times for products like furniture more than doubled in March, hitting distribution centers hard.

Against this backdrop, Third Wave hopes to enable warehouse autonomy robust enough to withstand dynamic environments, varying payloads, and changing conditions. The company’s forklift platform employs a combination of robotics, computer vision, and machine learning to familiarize itself with surroundings and make decisions about how to avoid obstacles, handle degraded pallets, and find misplaced items.

“The more we looked into warehousing and logistics, the clearer it became that the time was right to have just that sort of impact by moving the needle on supply-chain automation,” said Poursohi, a former Google roboticist and director of engineering at Toyota Research Institute. “The advances that machine learning brought to robotics had yet to be applied to the problems of supply-chain management. The forklift is this fantastic machine, has been in heavy use for a century already and has become the core component of a well-functioning warehouse — making it a great target for automation.”

Third Wave’s solution builds on a paradigm Poursohi calls “shared autonomy.” Rather than replacing human operators, it aims to augment them while keeping them out of harm’s way. (According to the U.S. Bureau of Labor Statistics, warehouse work ranks among the riskiest of occupations, with an accident rate over 50% higher than the industry average.) Every time a person interacts with Third Wave’s forklift, the underlying systems learn from that action so the forklift can better handle similar situations in the future. Moreover, the systems continuously train on data ingested by real-time sensors, further improving performance in environments where the forklift operates. 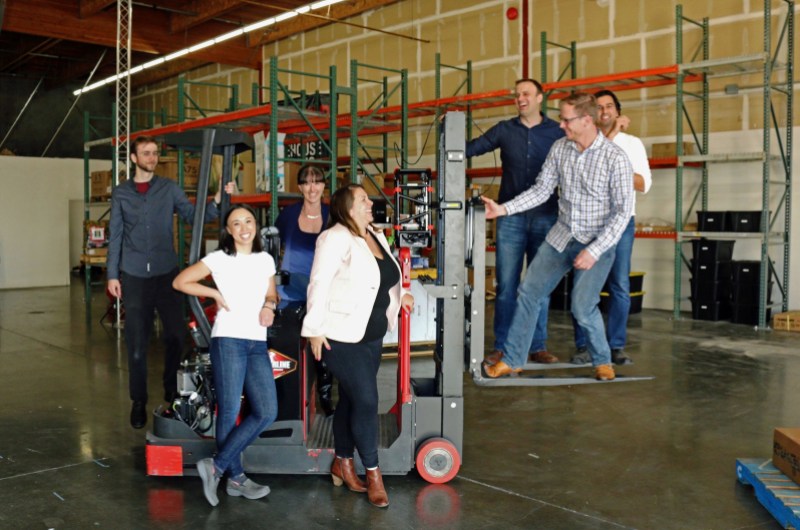 It’s Poursohi’s assertion that shared autonomy — which distributes the learnings from demonstrations and observations to all forklifts within a customer’s fleet — enables Third Wave’s platform to handle even the most challenging warehouse tasks. For instance, it’s able to take a fully loaded pallet and place it on multiple levels of shelf storage, a maneuver forklift operators call the “high-rack put-away.”

But the forklift market seems plenty large enough for Third Wave and its rivals. Over a million manual fork trucks are sold globally each year, and the trend toward automation is set to drive a huge market opportunity, according to Robotics Business Review. Nearly 28% of warehouses globally are expected to deploy commercial robots by 2025, compared with around 3% in 2018, ABI Research estimates. Allied Market Research anticipates the warehouse robotics industry will reach $5.186 billion by 2023, as tasks like pick-place, packaging, transportation, and palletizing become increasingly self-guided.

Around $1.2 billion in U.S. venture capital deals have targeted logistics-focused robotics and automation companies since 2015, according to PitchBook. Amazon acquired robotics company Kiva Systems for $775 million in March 2012, and last November DHL announced it would invest $300 million to modernize its warehouses in North America with IoT sensors and robots. Separately, startups like Attabotics and CommonSense Robotics have raised tens of millions of dollars for compact automated fulfillment centers that can slot into tight spaces, like underground garages.